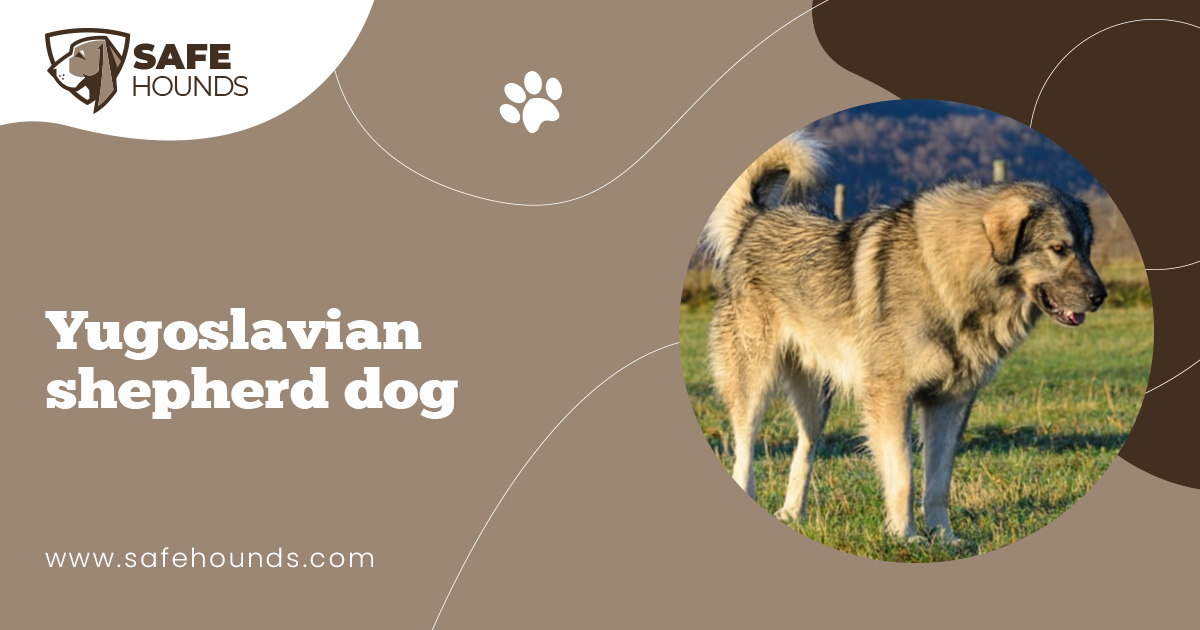 The Yugoslav Shepherd Dog is an ancient breed of livestock guard that was developed in the southeastern mountain region of Yugoslavia. This breed that is considered to be the oldest Molloser was given the honor of being the national dog of Yugoslavia. The Sarplaninac is a medium sized dog that appears to be bigger than its normal size because of a well boned body and a very luxuriant long coat that enables the dog to live outdoors. As compared to other livestock guards, the Sarplaninac has a rather small conformation. However, the ability of this dog to guard and protect the livestock can not be doubted. A Sarplaninac has tremendous strength and extraordinary large teeth that once tenaciously sunk on the neck of a wolf, a lynx or a bear would never fail to overpower the predator. This reliable and hardworking stock guardian has a strong protective instinct. To be an excellent guardian, a dog has to be rough, aggressive and tough. A Sarplaninac certainly has these qualities. This reliable guard would immediately react to perceived threats. This dog has well developed protective instinct that is not solely utilized for the livestock. The dog protects the master, the masters family as well as the masters property. This breed is distrustful of strangers. The dog seldom barks and would only do so for a reason. As they say, a person should be wary of a dog that does not bark as in most cases the dog would bite. A Sarplaninac is basically a peaceful dog with well balanced temperament. However, when a situation calls for the protection of the dog, its aggressive, ferocious and tough temperament will come to the fore. Highly independent and known to have a stubborn streak, this breed is not for everyone, especially for a person who is not dog experienced.

The Sarplaninac is a versatile breed. This livestock guardian runs many miles to carry messages from one shepherd hut to another. In recent years, the dog is being utilized by the military and the police. This dog that is accustomed to roaming the hills, to living with the sheep and the goats are now living with the cattle in American ranches.

A thickly coated medium sized dog with the head slightly lowered and the tail raised over the back is effortlessly galloping after a wolf. The wolf is one of the enemies of this dog as it poses a danger to the flock of sheep it is guarding. The dog is a Sarplaninac. This breed has a weatherproof double coat that allows the dog to stay with the flock in all types of weather. The tightly stretched skin is covered with a 4 inch long coat that is rather harsh to the touch and a shorter and softer undercoat. The head, ears and front of legs are covered with shorter hair. Long hair grows on the neck, on the buttocks, back side of the legs forming a ruff on the neck, breeches on the thighs and a plumed tail. The most common coat color is iron gray though any solid color is acceptable. Coat colors can be white, dark brown or nearly black.

A Sarplaninac has a slightly domed skull, a broad muzzle that is deep at the base and tapers slightly towards the broad black nose. Evenly spaced white teeth meet in a scissors bite. Medium sized almond shaped eyes can have a chestnut or dark brown color. The eyes have a piercing expression. V shaped ears are thickly covered with short hair. Ears hang close to the cheeks. The medium length neck is thickly coated thus it appears to be shorter than its normal size. The dewlap free well muscled neck blends harmoniously into the head and shoulders of the dog. This bred has a longer that tall body. The dog has broad, moderately developed withers, a strong level back, a slightly sloping topline and a deep chest that extends to the elbows. The muscular tail has a thick base and tapers to the tip in saber fashion. At rest, the tail hangs down. When the dog is alert or on the move, the tail is carried slightly above the back. A Sarplaninac faced with a predator would be highly agitated. In such case, the tail will be raised over the back.

The Sarplaninac is noted for its tough and aggressive nature. This temperament is necessary for the dogs function of guarding the flock. The family may not be the main focus of a Sarplaninac as these dogs are more concerned with the flock. However, this is a loyal breed, one that obeys only its master. This loyalty means that the dog will protect its master, the masters family and the masters property. The dog will trust no one completely but it is ingrained in the dog to protect anyone or anything that is inside its perceived territory. This breed is seldom kept as pets because of its aggressive nature.

A Sarplaninac can be trained to be a companion. Socialization and obedience training must be started at an early age. Moreover, the handler or the owner has to be firm, authoritative and consistent with the training. These are intelligent dogs and training should not be a challenge. Because of its intelligent nature, the dog is often defiant and would turn a deaf ear to the commands of the handler. A well trained and well socialized Sarplaninac though would be tolerant of children and other household pets. Socialization will also lessen the wariness of this breed with strangers.

The Sarplaninac is a working breed and as such the dog is valued for its working abilities rather than for its appearance. This breed however has a long luxurious beautiful coat that is prone to matting. Brushing the coat occasionally will maintain its tip top condition.

The Yugoslavian Shepherd Dog-Sarplaninac is considered to be the oldest and the original Molloser. This breed is believed to be between 1600 to 2000 years old. Being a very ancient breed, the Sarplaninacs ancestry is unknown. Experts have several theories as to the origin of this breed. One theory believed that these dogs have descended from the Molloser dogs of the Epirus, the ancient tribes that inhabited the Balkan Peninsula. The Molloser dogs developed from the Great Tibetan Mastiffs who in turn was developed from Tibetan wolves. Other experts have suggested that these dogs originated from the ancient livestock guard dogs of the Turks, from the dogs of the Romans or from the ancient mollosian dogs of the Greeks. As the Balkan region has quite a number of migrations, this theory is also possible.

The Sarplaninac was formerly utilized to guard the livestock. In summer, these dogs are usually found in the hills protecting the sheep. In winter months, the flock will be transferred to the valleys for winter feeding. Again the dog will be seen accompanying the flock. These very dependable stock guards work independently often times without human supervision. A Sarplaninac is known to chase off lynx and wolves. This courageous dog would never back down from fighting even with a Balkan bear. Highly intelligent, this breed is known to have the ability to choose from grazing sheep and goats which are ready for the market. This breed has suffered a lot during the war years. Breed population was tremendously decreased. Dogs were often shot on sight, others become strays when the owners were killed. In other instances, the dogs were put down by the owners as they are becoming a burden to feed.

Before 1970 exportation of the Sarplaninac from Yugoslavia was banned. It was believed that the first dogs to enter American soil were carried down from the mountains by mules. These excellent guard dogs have slowly spread in North America. Presently, the Sarplaninac are utilized by American ranchers to control coyotes and other predators.