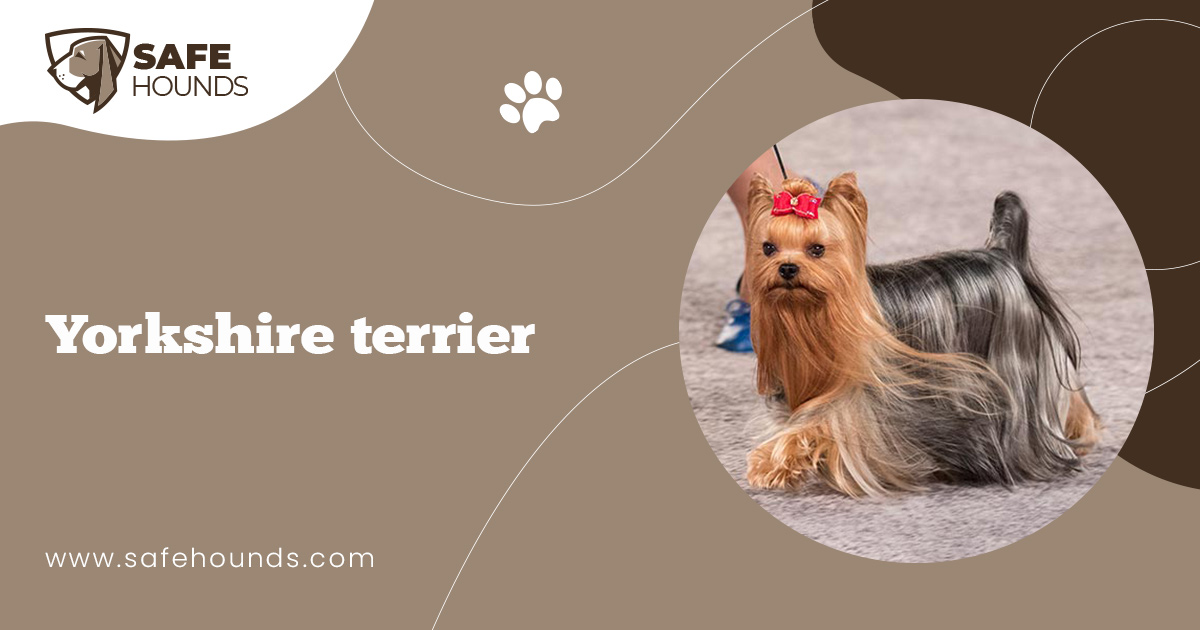 The Yorkshire Terrier or Yorkie as it is affectionately referred to by its fans is one of the smallest breeds of dogs in the world and is for sure the smallest breed of Terrier. Its personable, playful and intelligent demeanor has made it a popular house pet for families and individuals around the globe.

It is a Terrier, however, so that means that it exhibits many of the common characteristics that all Terriers are so well know for. This means that it is on the high strung side and as all Terriers do it loves to hunt when it is able to do so. It was originally bred for hunting rats in mines by blue collar miners in England a little over a century ago but back then it was a slightly larger breed of dog.

Physically, its most distinguishing trait is its beautiful flowing perfectly straight silver and brown hair that flows of its back and sides and reaches down to almost the floor. Because of their size and active alert personality they are a great choice for an indoor house dog for someone that loves terriers, but doesnt have the yard space for one of the larger breeds. This breed is good with children as long as they are not too young because they will snap if they are overly teased or irritated also they are prone to a few minor health conditions as well.

In spite of their abundance of hair the fact is that they shed little to none of it. So combined with their small size there really is no problem with them scampering or napping on furniture from time to time which is just one more reason they are favorite pet particularly for condo and apartment dwellers. They are affectionate lovable little creatures and it is for this reason that so many of the photographs that you will see of them are of them happily perched in their owners arms.

The most notable features of the Yorkie is its very small size and its abundance of smooth long hair that will be silver-grey on the sides and back and light brown on its head neck and front quarter. If left unclipped the hair will flow completely to the floor completely eliminating all four legs from view. Its tail is docked to one half its normal size and it will carry it semi erect just above level with its back. Also its pointed ears will stand erect.

Often the Yorkshire Terrier will be seen with a ribbon on its head that is used to tie back its hair which will otherwise completely cover its eyes and hang in their food bowl. The body is compact although it is completely hidden by its hair and it tends to carry its head in an erect alert manner which will lend this dog a look of distinction. They are an extremely small breed of dog standing no more than seven inches in height and weighing in at a whopping seven pounds when they are mature. In most cases the hair on its ears and feet will be trimmed.

Its head is slightly round with a slightly short snout that will have a black nose on the end of it. Its puppies are born black and they will gradually change their color to silver-grey within their first year. The Yorkshire Terrier is truly and adorable breed that responds well to grooming. This is one of the many reasons why its popularity has been so steady since it was introduced in the U.S.

In spite of its super cute appearance the Yorkshire Terrier is still a Terrier, which means that it will have many of the common personality traits attributed to Terriers. If given the opportunity it will not hesitate to hunt, but due to its size its quarry will be limited to lizards and mice.

They are an affectionate breed that bonds closely with its owner and family around it and just like all terriers it doesnt like to be left alone for long periods. It is playful and will need some chew toys preferably the type that squeak when they are bit and it also loves to play with children as long as they are not too rough with it.

Obviously due to its mass of hair the Yorkshire Terrier will need to be brushed regularly and unless it is clipped it will grow down past the floor. Also the hear on its head needs to be tied back or clipped or it will tend to dip into its food bowl.

The Yorkie also needs regular exercise and lots of stimulus or it can develop destructive habits such as chewing on furniture or tearing up clothes. It can be difficult to house train, but other than that it is a relatively easy animal to train. The Yorkie is also prone to premature tooth decay and can have a sensitive digestive system so treats should be avoided and some type of dental hygiene program should be a part of its routine.

In spite of its cute appearance the Yorkie was bred as a working dog that could be conveniently carried into mines to hunt for and eradicate troublesome rats by English miners a little over a century ago. Although it is hard to believe today but the Yorkshire Terrier due to its fearless nature was also used for hunting back then to flush fox and badger from furrows that other larger hunting breeds couldnt fit in. Its exact lineage is somewhat unclear but a number of dog breeds are speculated to have played a part in the development of the Yorkie including the Maltese which is another breed of dog that wears its hair in a similar long flowing style.

However the Yorkshire Terrier that they used then was slightly larger than the Yorkie that is now kept as a pet in homes around the world today to to breeding efforts since them to miniaturize it even more. It appeared in its first dog show in in 1861 and up until then were somewhat of a secret that was kept by the miners that bred them. It was 1870 when they were officially renamed from the Broken Haired Scotch Terrier to the Yorkshire Terrier after the Westmorland show in Yorkshire England.

It is unclear when the first Yorkshire Terriers were brought to the U.S. but the first recorded birth of puppies was recorded in 1872. The earliest dog shows that it was shown in divided the Yorkshire Terrier into classes determined by its weight with dogs weighing less than five pounds being shown in one class and those over five pounds being shown in another separate class. However this didnt last long and eventually it was decided that they would all be shown in one class with the weight range being set at between three to seven pounds. In 1984 a separate breed of Yorkie was developed when a piebald pup was born as the result of a recessive gene.

This new breed is called the Biewer Yorkie or simply the Biewer. They resemble the Yorkshire Terrier completely other than the fact that they have substantially more white and black hair on them and are generally devoid silver hair. To this day the Yorkshire Terrier remains a popular breed and its popularity received an even bigger boost a couple of decades back when it was featured on the TV show Green Acres as Eva Gabors pampered pet. One of the many reasons for their ever expanding popularity is that they make great house pets for someone that desires a miniature dog breed that possesses the intelligence and lively spirit of a Terrier.