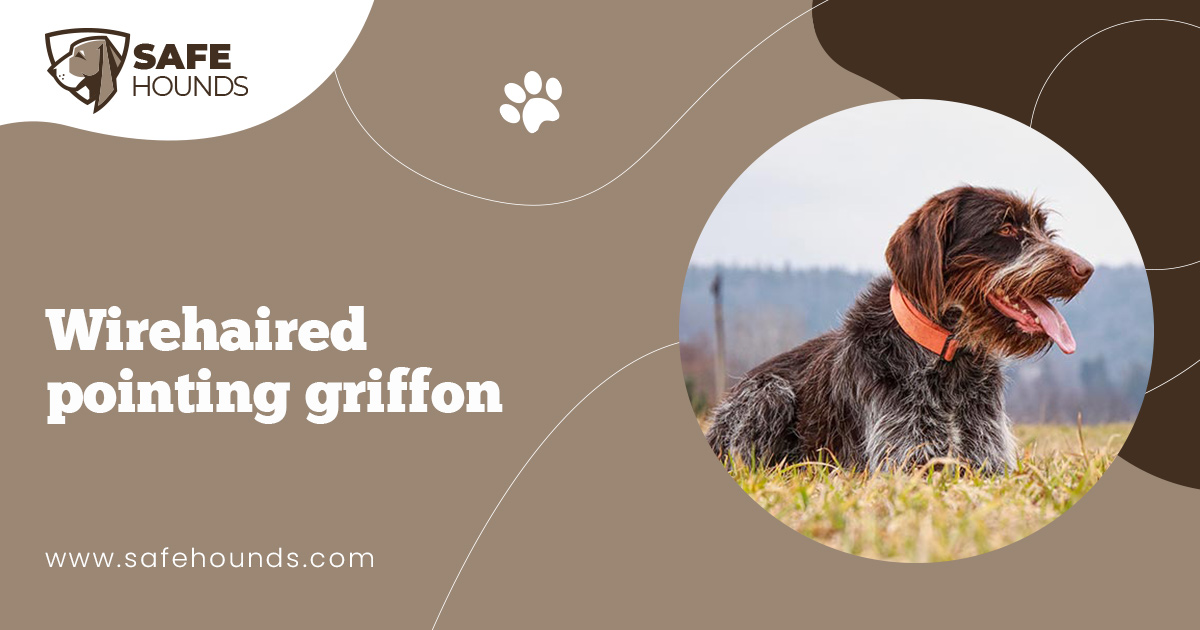 The Wirehaired Pointing Griffon is a fairly rare breed of hunting and gun dog that many consider to be French in origins was actually developed by a dutch dog breeder in the late 1700s.

Its a medium sized hardy and strong breed of dog that is covered with a rough medium length wiry coat of hair that is not prone to shedding, but it does have a relatively thick downy undercoat that makes it less than ideal in warmer climates. Its a distinctive looking breed of dog with bushy eyebrows and the thick goatee at the end of its noticeably square muzzle. This is a skilled field dog that truly loves to hunt and loves the water which makes it an ideal dog for hunting waterfowl. Unlike other breeds of hunting dog that tend to wander and cover large ares of territory the Wirehaired Pointing Griffon tends to be more patient and methodical remaining and for the most part will remain fairly close to its hunting partner.

It also has several attributes that make it a good house dog such as its relaxed demeanor when it is in and around the home. Also it tends to be curious and friendly with new guests that arrive at the home particularly if it has been socially acclimated at a young age. This dog also tends to be easy going and gentle with children and can be quite playful at times.

One of its shortcomings however is that it does not do well confined to a backyard as some other dogs tend to and if it is not taken on regular jaunts it can develop behavioral disorders and become destructive. However it is easily trained and and is anxious to please and is far less inclined to compete for and challenge dominance as other breeds of dogs often can. Also in spite of being a natural hunter it tends to get along well with other pets in its environment including cats.

The Wirehaired Pointing Griffon is a fantastic looking breed of dog with a thick wiry coat of wavy hair that can range in color from silver-grey to light brown or white and orange. The most prominent feature of this dogs coat is its thick bushy eyebrows and pronounced thick goatee that give it a distinctive wise old man expression and appearance.

Due to its extremely thick wavy coat of hair it often has an unkempt appearance. Its a medium sized very sturdy looking breed whos serious looks and expression belies its friendly relaxed overall demeanor. In spite of its shaggy appearance it is far less prone to shedding than other breeds of dog with similar shaggy coats but its coat does require some occasional brushing as it can tend to gather debris.

When in motion it will have a smooth highly coordinated gate that is purposeful ans slower than most dogs its size and shape. It has a large thick head with medium sized ears that lay flat on its cheeks and jowls and a boxy muzzle that appears larger than it is due to the thick shaggy hair that covers it. Its brown eyes are elliptical in shape and can have some yellow in them. The Wirehaired Pointing Griffon will often tend to be relaxed and reclining when it is not at play and is most content reclining on a cool day in the sunshine. It will have a straight back line that has a slight slope downwards from front to back with a cropped one-quarter sized horizontal tail that will stand erect when it is alert.

The Wire Haired Pointing Griffon is a dog that can have many different personality traits that can range from the aloof and serrious to playfull and goofy depending on the particular dog. However one triat that they all have in common is a propensity to become easily bored if they are confined in a small yard with little stimulus in which case thay can quickly develop distructive behavioral disorders.

They all will love outings as well and do make great jogging as well as hiking companions. As hunting dogs go they are less aggressive than other breeds so they do make goood family pets to have in and around the home.

It is the coat of this breed of dog that requires the most amount of care. All dogs that have thick coats such as this breed has need to be checked from time to time to make sure that they have not picked up burrs especialy around their eyes and toes. They tend to shed very little, but they still need to be brushed out occasionaly to remove loose hair and make room for new growth. Also bathing them is not an issue due to the fact that they do not suffer from skin conditions that other breeds can tend to. They dont do well in extremely warm climates so make sure that your Wire Haired Pointing Griffons dog house is in a cool shady place.

It was the introducftion to Europe of Dareinism that sparked the interest in the public to the breeding og many types of animals including of course dogs that has resulted many nof the various breeds that are with us today. However it was ancient societies such as the Greeks and the Romans that were the first to take up the science of dog breeding so it is no surprise that the first mention and depictions of the first Griffons come from Greece over 2500 years ago.

More recently in recorded history there is further mention in various texts of numerous griffon like hunting dogs that were located in several regions throughout the European Continent. So the history of the Griffon can be traced back in many directions to many different areas on the planet.

However the exact origins of the Wirehaired Pointing Griffon are known and they begin in Holland in the latter part of the 1800s. Edward Korthals was a well to do son of a Dutch Shipping Executive who also happened to be an avid hunter in the the marshy countryside of Holland. His interest in breeding and animal genetics was sparked in his youth by his father who himself was an accomplished cattle breeder. However it was in the year 1873 when the younger Korthals was given the task of managing a Dutch princes extensive dog kennels that he was able to begin developing the hunting breed that he had always dreamed of in earnest.

His plan was to develop a multi purpose hunter that was capable of functioning well in the marshy terrain of his Dutch homeland and purchased a wide variety of breeds from throughout Europe to work with. The fact is that he did keep accurate records to it is possible for someone to exactly retrace the steps he took over two decades to finally arrive at the breed that we now know as the Wirehaired Pointing Griffon. It was in the year 1886 that his work was completed and the standards for the bred were established he also took steps to promote his new breed of dog within the sporting establishment that he moved in in Europe at that time. The first Wirehaird Pointing Griffon was brought to the U.S. in 1887 and was registered with the American Kennel Club that very year.

The breed became immediately popular with sportsmen on the North American Continent, but just as with so many other dog breeds it was world wars I and II that all but completely stopped any ongoing breeding programs. This was due to the fact that large healthy intelligent sporting dogs were in great demand in the armed services and henge were taken away to war in large numbers in both wars. It was in the 1950s that renewed interest in the breed was sparked and various cubs were formed defecated to this unique breed of multi purpose sporting dog. It remains popular to this day but due to changing demographics and the needs of this particular breed that does not fare well in urban environments it can be a difficult dog to locate in many areas of the country.