Why do dogs sleep so much?

Home / Blog / Why do dogs sleep so much? 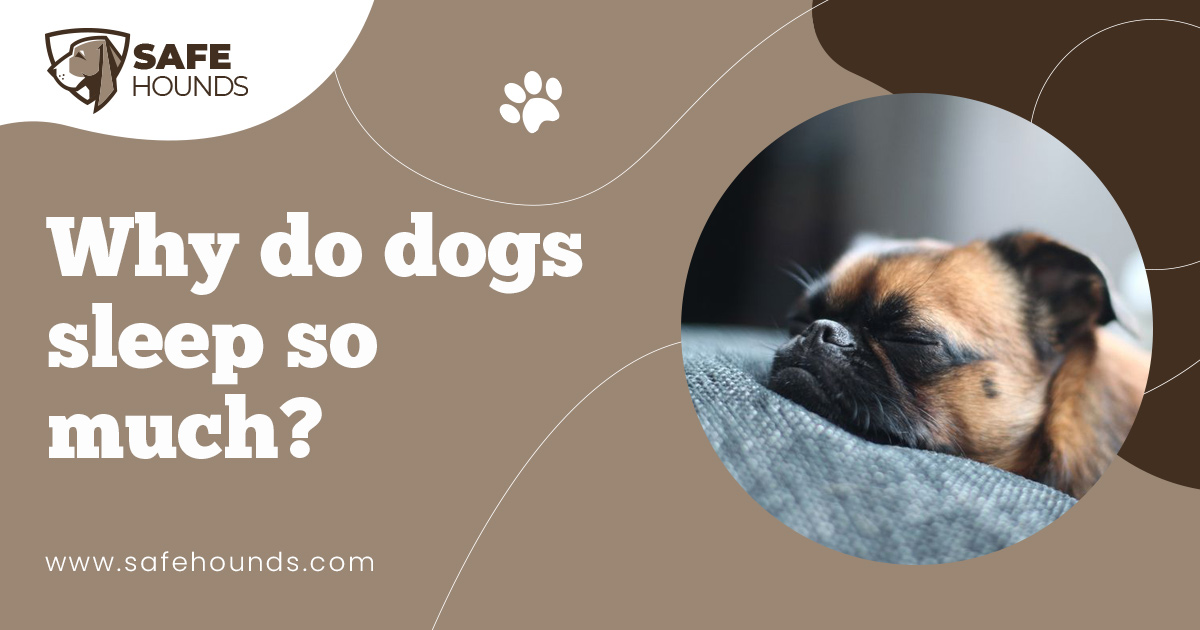 Why do dogs sleep so much?

Sleep is very important to many creatures amongst the animal kingdom. It is very important as it provides the body with rest and allows it to be replenished so that upon waking the dog will be ready to carry out tasks and exercise. These functions are obviously important to make sure that the dog lives a healthy and active life. Sleep plays a huge roll in most animals lives and this article will be explaining why dogs sleep so much, it will be looking at the different aspects of why a dog sleeps and also some of the causes.

So why do dogs sleep so much? Well, to start off with it is expected that dogs will need a lot of sleep in order to function properly during the day. As you will later find, due to the different species of dogs you will find that some sleep for longer than others. But there are a variety of reasons as to why dogs will sleep so much, and below you will see some of the reasons as to why dogs sleep for such long periods of time.

One reason as to why dogs sleep so much is commonly due to lack of exercise, laziness and a bad diet. When this occurs it can lead to the dog becoming very lazy and less active. This is bad since it is important for the dog to get regular exercise as well as a balanced diet. In this state it would be a bad motive for the dog to be sleeping long hours, however if you applied this to a dog which was healthy and got regular exercise it would not apply, lots of sleep would be fine for a dog living in this way.

So remember, sleep is very important for dogs. With many dogs such as pedigree dogs they have to stick to a strict diet and sometimes the diet can be quite restricting and often cause them to fall into a longer sleeping pattern. It is not completely a result of strict diets but it can be related to it. Many dogs need different amounts of sleep, some longer some shorter but it all depends on what their body needs in order to function properly. Sleep though is beneficial to them either way, sleeping too much could cause problems but as long as exercise is incorporated into the equation it can only be healthy.

Though the majority of dogs do sleep to replenish and get rest, there are some which sleep for long periods of time simply because they are lazy. Since the majority of domesticated dogs dont have to do much in their day to day lives it is common that many of them will sleep for more time than they need. This is nothing bad for the dog, but if it is combined with excessive eating it could result in a problem. However, it is common that dogs will sleep more for another reason, since domesticated dogs are not stray it is expected that they will not have to do anything for themselves, they are pretty much receiving all they need on a plate by their owners so it can result in boredom which can then lead to extra sleeping time. But for most cases it is because they either have nothing to do or just in general feel like having extra nap time. What reasoning can we give to lazy dogs; we are just the same, in the mornings I am sure that we have a lie in because we cant be bothered. We are just as guilty as they are.

My hope is that this article has taught you the reasoning behind why dogs sleep so much. There are a variety of reasons as to why a dog has to sleep so much but if you want a generalised summary then the answer is simply that the dog needs more rest in order to function properly. Dogs can easily get tired after exercising and if they go for a nap it is because they need to recuperate and replenish. So before saying that dogs are lazy animals, just take into consideration that they need the rest to allow better performance during the day.