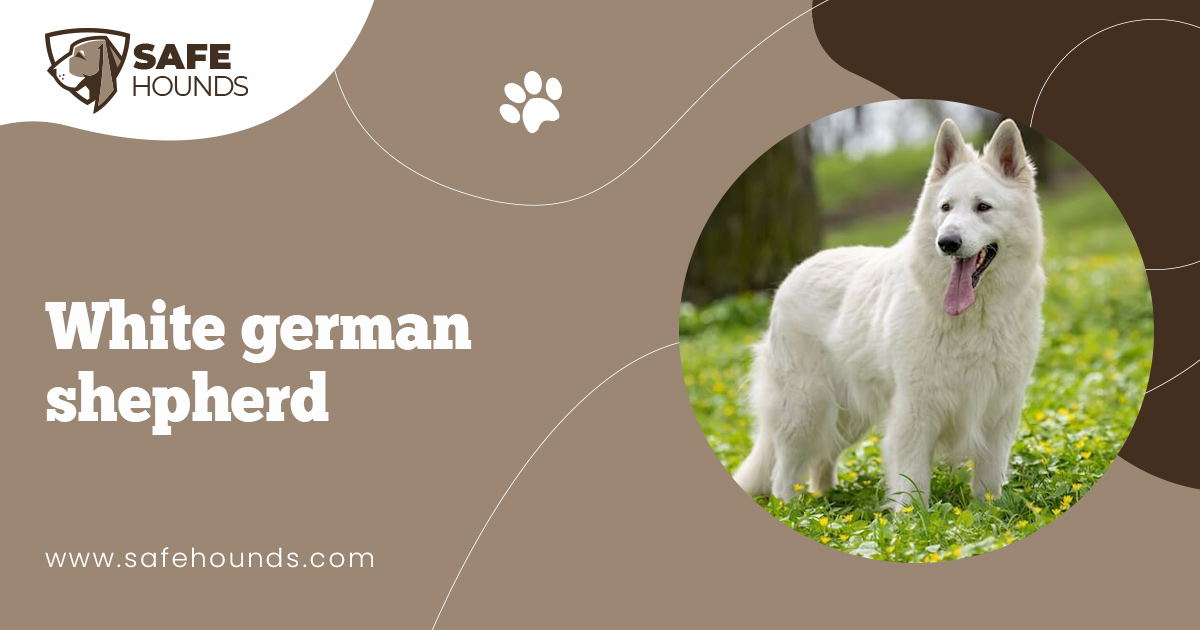 The White German Shepherd is a muscled and powerfully built medium sized dog with an impressive looking white long double coat. This is an internationally recognized purebred. In effect, the breed has originated from Germany, Canada, and the United Sates. Registries in these countries such as the German Kennel Club, the Canadian Kennel club and the American Kennel Club have registered the breed simply as Deutcher Schaferhunden (German Shepherd Dog) although the two breeds were never crossed. This is due to the fact that a white coat is a disqualifying fault in the German Shepherd Dog.

White German Shepherd or White Swiss Shepherd Dog was the name given to the breed when it as imported to and recognized by Switzerland as a separate breed in the early 70s. Any breed imported from a country that does not recognize the breed can be given the appropriate name by the importing country, in this case Switzerland. The name was obviously chosen because of the distinguishing feature of the breed – its white coat.

The White German Shepherd has directly descended from the German Shepherds. This breed is considered to be one of the most beautiful breeds. The dogs pure white coat contrasts with the black pigmentation of the nose, lips and eye rims giving the dog a truly entrancing appearance. This breed was primarily developed to be herding dogs. The dog has the stamina to tirelessly work the field, herding and guarding the flock. The dog still retains its inherent herding qualities but it has found another role to play. The White German Shepherd has diverged from the personality of its progenitor-the German Shepherds. This breed is mild tempered and less assertive and less aggressive than its ancestor. This made the dog a perfect home companion. The dog is now found in homes being the loyal, affectionate and cheerful companion that is a source of endless joys for the family.

This breed is highly intelligent. The dog responds well to training. The breed has excelled not only as a pet but also as therapy dogs. The White German Shepherd has evolved into a valuable police force asset that is used in bomb and narcotics detection as well as in search and rescue operations. This is a healthy breed with no known genetic health conditions.

The White German Shepherd is a medium sized dog that has a well muscled body. This dog has excelled in the function it was primarily developed for-as a herding dog because of the well proportioned body and strong well boned legs. The body is longer, the back is straighter than the Deutcher Schaferhunden. This adequate balance provide the dog the agility and trotting capability to immediately transform a trot to a gallop as required in the performance of its function .

Mature male White German Shepherd measures about 25 inches in height and weighs from 75 to 85 pounds, females height is about 23 inches and weigh from 60 to 70 lbs.

The dog has a wedge shaped finely chiseled head that is proportionate to the size of the body, a rounded skull and a muzzle that is of medium length. The dog has medium sized nose that can be black or lightly colored. Almond shaped brown to dark brown colored eyes are set a little obliquely. Well pigmented tight lips enclosed strong teeth that meet in a scissor bite. Set on high erect ears are broad at the base and has moderately pointed tips. Very bushy tail tapers to the tip. The tail is low set and reached the hock. Saber shaped tail hangs down when the dog is at rest and carried slightly higher but never over the topline when the dog is on the move.

The White German Shepherd white double coat is weather resistant. The undercoat is very thick and has a fine texture, the outer coat is dense, about 2.5 inches in length, straight, rough and lying close to the body. Males grow longer and heavier hair on the neck forming a slight mane. Hair at the back of the legs, on the dogs rump and on the underside of the tail is longer and thicker than the hair on the body. Softer, smoother and shorter hair covers the dogs head and ears. Long hair on the back of the legs is slightly harsh. Dogs with pure snow white coats are preferred though those with light biscuit tan or light cream coats are also accepted.

During the early part of the White German Shepherds development the dog was proven to be one excellent herding dog. This is a tireless worker, one that enjoys the physical and mental stimulation that goes with its function as a herding dog. The dog is very loyal and affectionate to its handler. From being accustomed to working and living with the flock, the dog can now be seen in homes being the devoted companion of the master and the tireless playmates of the children. The dog is extremely affectionate with the family but it is aloof with strangers. These dogs are never shy but they are known to be observant and shun the overtures of strangers. This attitude can be corrected with socialization and obedience training that is best started at an early age. The White German Shepherd is an intelligent breed. They also have the innate canine eagerness to please. Training will not be a problem especially if it is done in a positive manner.

A home with a modest yard would be a suitable living arrangement for this dog. Being relatively inactive indoors, this dog would do well in an apartment too. This dog will not cause trouble with the neighbors as this breed is not a barker. The owner just has to ensure that regular exercise opportunities are given to the dog. Not only would it ensure the good physical condition of the pet but it will also prevent the dog from being bored. Dog lovers know that a bored dog is a destructive dog.

The longish pristine white coat gives the dog a striking appearance. However this coat constantly sheds heavily. Owners must be prepared to deal with the dogs heavy shedding by regularly brushing the coat to remove the dead hair. Aside from the annual trips to the vet, the dog must be regularly checked for external parasite infestation. Mites and fleas would find the thick hair of the dog a safe haven. Ears must be checked regularly to avoid infection.

The German Shepherd Dog was originally created by Max von Stephenitz. Towards the end of the 18th century, a German Army military officer Max Emil Frederich von Stephanitz had a dream of creating a dog with a wolfish appearance, highly intelligent, diligent and possesses good character and temperament. He found a perfect model of what he has in mind in a dog show. He bought the dog and renamed him Horand von Grafrath. Horand von Grafrath is known to be the father of all German Shepherds and was the first German shepherd to be registered in Germany. When Stephanitz created the German Shepherd the color was not given consideration, what matters is that the dog that was developed is a diligent worker. During the breeding program white coated puppies were born although Horand von Grafrath has a sable coat.

During the 1930s, fashion change causes the white coated dogs to be disfavored. It was erroneously thought that these dogs are albinos and as such suffers blindness, deafness and many other health concerns. The white coat was described by the parent German Shepherd Club as a defect. Other German Shepherd Clubs in various countries followed suit. A worldwide campaign to disqualify the white coated dogs became very successful. The white dogs were banned from the show ring.

Fortunately for the breed, supporters in Canada, United States and a few in United Kingdom continued breeding the white dogs. In 1968 the White German Shepherd Club of America was created. The breed had a separate standard and was again allowed to compete in dog shows. During this time, these white dogs were imported to Europe. Lobo White Burch, a white coated dog was imported to Switzerland in 1967. This dog was registered in the Swiss Kennel Club in 1970. Lobo was mated with White Lilac of Blinkbonny, an import from England. This mating paved the way for the creation of a new breed. Switzerland was the first country to recognize this white breed. Registrations and pedigrees were transferred to the new breed that is now called the White German Shepherd. The breed was recognized by United Stated when registration was begun by the UKC on April 14, 1999.The breed was granted international recognition by the FCI in 2002.