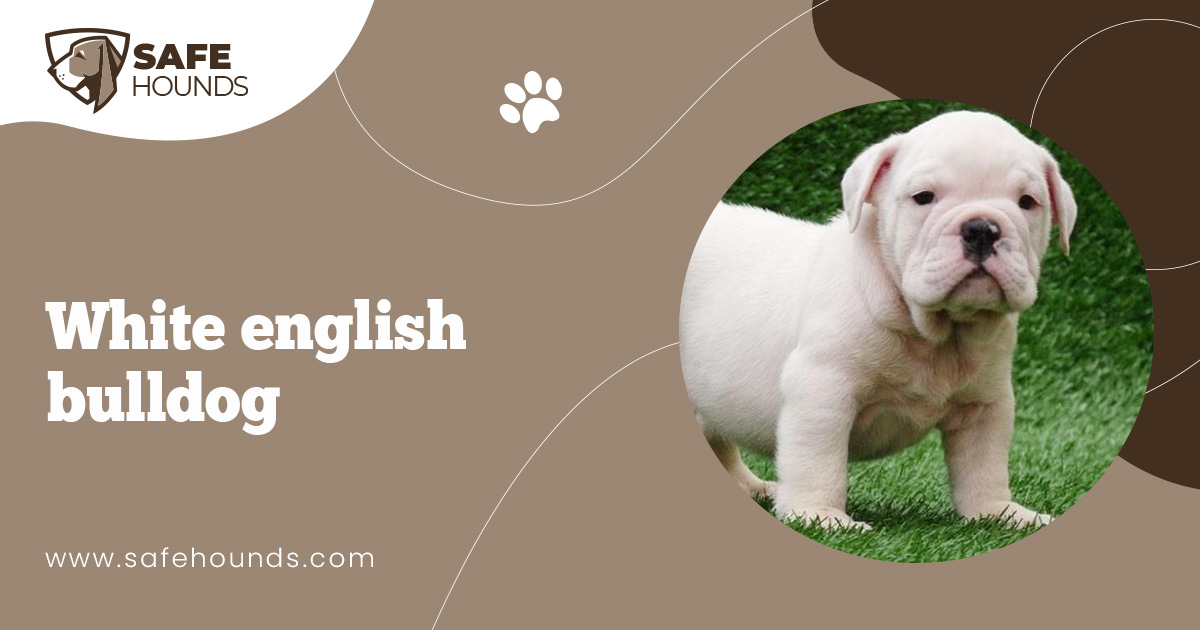 The White English Bulldog is one of the breeds with a rather misleading name. This breed also known as Old English White, English White, White English, and Old Southern White was developed not in UK but in Southern United States particularly in southern Georgia and Florida during the 16th and 17th centuries. English bulldogs progenitors are all around farm dogs. The dogs were utilized as protectors both of the farm and the family, used to hold livestock as well as butchers dogs. The dogs were utilized in bull baiting sports. The English believed that bull baiting makes the meat more tender and nutritious. A dog will suffocate a bull by holding on to a ring fastened on the bulls nose. After bull baiting was banned the dog were developed for the blood sport of dog fighting.

Bulldogs that originated from UK are commonly characterized by brachycephalic skulls. These dogs are noted for their sourpuss expression because of the massive heads with heavy folds of skin. The very short muzzles make the dogs very sensitive to heat. They would need extra care during the summer months. The dogs would commonly have to go through Caesarian section to deliver puppies because of the massive heads.

These dogs should not be confused with the White English Bulldog. The WEB has descended from English Bulldogs but the introductions of unspecified breeds have made a difference in the features and temperament of this American dog. English Bulldogs generally weigh between 50 to 55 pounds. The White English Bulldog stands from 20 to 25 inches and tips the scale from 55 to 110 pounds. This breed unlike its English cousins does not have a brachycephalic head. The WEB has a broad flat skull and a somewhat square shaped head. The 3 to 4 inch symmetrical muzzle is proportionate to the head. Stop is shallow but noticeable. Flop or rosette ears are set on at the back of the skull. Small almond or round shaped eyes can be amber or any shades of brown in color. Large round black pigmented nose has well opened nostrils. Lips are black pigmented as well. Jaw muscles are well pronounced. Large teeth meet in a scissor or reverse scissor bite.

This breed has a short coat that is rather coarse to the touch. Slight feathering is found on the back of hind legs. This breed can have a solid white coat or the base white coat can be marked with shades of brindle or shades of red brown. A WEB is a large and powerful breed. Medium to long, the solid thick neck denotes extreme power. The well defined broad shoulders are well muscled. This square shaped dog has a broad chest. The tail that is thick at the base is commonly docked. Undocked tail tapers to the hocks and takes the form of a pump handle or carried upright when the dog is on the move or excited.

An ancient breed that has remained true to form that is a White English Bulldog. The word bulldog has a rather negative connotation. A bulldog is viewed as a fighting dog, a ferocious animal that is very hard to control. The White English Bulldog makes an excellent watchdog. Because of its protective instinct, this breed would not need any training to protect its family and the livestock under its care. The dog is naturally wary of strangers. But would you believe that in spite of the strong and intimidating appearance, a WEB is docile, loyal and even tempered to its human family? The dog makes a suitable companion of the children as it is gentle with the young ones and at the same time very protective.

The White English Bulldog being short coated would be an easy breed to maintain. Bathing must be done only when necessary. Occasional brushing and wiping with a damp cloth would be enough to maintain the good condition of the coat. The WEB unlike other bulldog breeds reproduces naturally. Because the head is not very large Caesarian section would not be necessary. A White English Bulldog is first and foremost a farm dog thus it would not be a suitable indoor dog. The dog needs to work, to have a large open space to run freely. A White English Bulldog that is kept solely as a pet would have to be provided with regular opportunities to exercise and to let off steam.

The White English Bulldog is not indigenous to America. The name suggests that the dog originated from UK. The breed has actually descended from English Bulldogs but how the dogs arrived and developed in America can be anyones guess. Just like any other breed with no precise origin, WEB fanciers have different theories on how the dog was developed. One theory believes that the English White or the Old Southern White as the breed is also known can trace its origin from the Alaunts of Spain. The Alaunt is the basic breed type of the White English Bulldog. The Alaunt is an ancient breed brought by the Alans to the Spain and to the other parts of Europe during the 4th and 5th centuries and utilized as protectors of livestock and as war dogs. These old type English Bulldogs were brought by the Spaniards in the area that is now Florida and utilized to fight the Indian tribes.

Another theory speculates that the White English Bulldogs were developed in the 16th and 17th centuries from the dogs brought by the early immigrants from England to the New World area which is now the southeastern United States. The dogs were utilized by the early settlers on the farms and plantations. The New World teems with wild animals. The main role of the dogs is to guard the homestead and the livestock from feral animals. The dogs are strong and courageous thus they were used by the settlers to round up unruly cattle. However, it was argued that before the early settlers brought their dogs, the Spaniards have already established their forts, cities and towns in Florida, South Carolina, in Southern Georgia and in the southern areas of Alabama. Consequently, the White English bulldog was also established. Presently, heavy concentration of White English Bulldogs is found in these regions. Although contested by other breed fanciers, it speculated that the dogs brought by early settlers developed into the APBT. The WEB could have developed from the dogs brought by French settlers and traders. The dogs were used to control slaves trying to escape for freedom.

It is highly probable that the Old English White or the White English Bulldog could have developed from the Alaunts, from the mastiffs or from the English Bulldogs. This breed resembled and noted to show most of the characteristics of the bulldogs that exist before 1836. The White English Bulldog however, does not have the aggressive temperament of its war dog ancestors. In spite of the dog fighting ancestry, the WEB does not manifest aggression towards humans and towards other animals. This breed is wary of strangers and has a well honed protective instinct but the dog will never show aggression towards its family. In 1970s, John D. Johnson and Alan Scott used White English Bulldogs as foundation stock for the development of the American Bulldog.