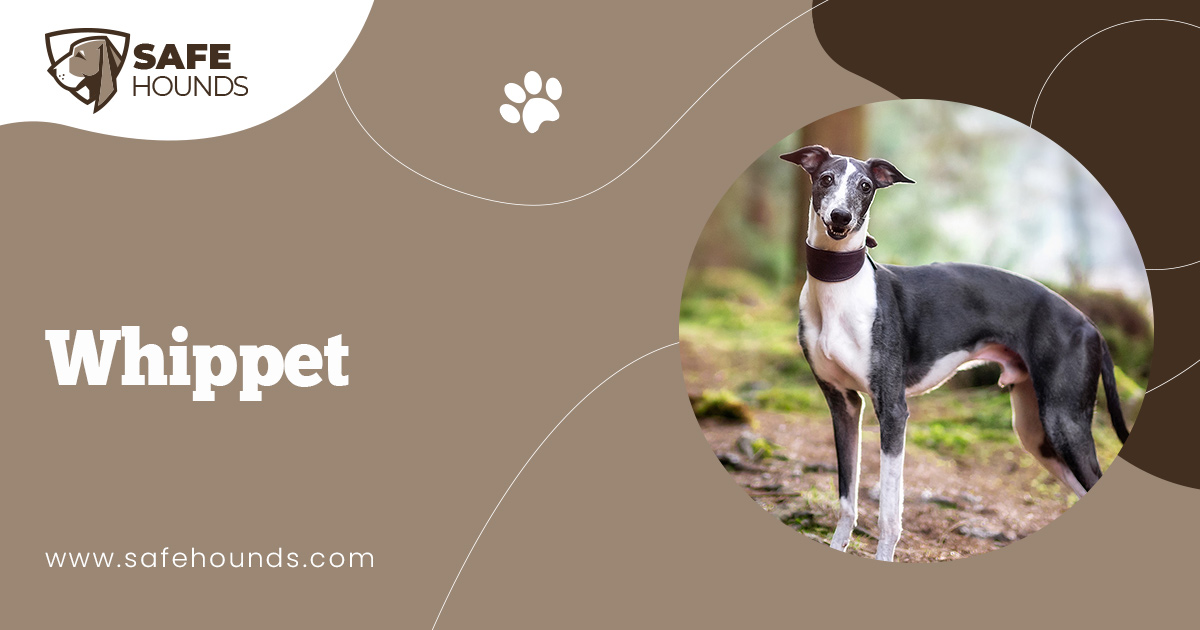 The Whippet is an unusual looking dog, a member of the sighthound family that was originally bred for hunting small game in open fields but is more recognized for its prowess as a fine tuned racing dog. This means that they will pursue cats it is unfamiliar with and other small furry pets as well.

What stands out the most about the Whippet is its lean thin delicate body shape along with its pointed wedge shaped head. The best place to see an actual specimen in action is at your local dog park if you have one in your town or city, because they do need a good run now and then and they are becoming a more popular choice as a house pet by more and more people. The reason for their popularity as a house pet is that as dogs go they make a great animal to keep in and around the home for a variety of reasons.

On top of that they have a magnetic winning smile due to their long thin snout and when they are truly happy their smile will be even more pronounced. In spite of the Whippet being a first class athlete that is happiest when it is in hot pursuit of a Frisbee or another dog playing keep away with an attractive toy they are gentle and relaxed when they are spending time inside of the home. The are great with kids and snapping is something that just doesnt suit their character unless of course they are bothered at their food bowl during dinnertime. Also they are perfectly behaved when company arrives and are not a dog that has to be put away but rather they tend to be curious and friendly. They are an intelligent breed though and that means that while they train quickly they will test their limits from time to time so they will require refresher courses now and then.

Due to their long list of positive personality traits they do not, for the most part, make a very good watch dog however and are a dog that would view a stranger with curiosity rather than hostility.

The Whippet is definitely not your normal looking dog and the first thing that is noticed about it, is that it is unusually long and thin. It also has a very deep chest that makes its retracted stomach seem even more slight than it actually is. It is definitely not an unhealthy looking animal though and in fact, to the contrary, it looks to be the excellent athlete that this breed of sighthound is.

They have an elegant almost sculpted overall look to them and due to their very short hair every aspect of their delicate features is plainly visible. The ideal height for the Whippet is between 19-22 inches for males and one inch less in general for the females. They can weigh in anywhere between 25-40 pounds for the males and approximately five pounds less on average for the females.

As for color, there really are no guidelines for the whippet and virtually any color or combination of colors is possible. They can be anything from solid black, white, brown or grey, to a complete random blend of them all as well as brindle in its entirety or mixed. Any description of the Whippet must also include a description of a Whippet that is running, because it is truly a sight to behold.

They take off like a shot and achieve their maximum speed of approximately 35-40 mph in a fraction of a second and are extremely agile when in hot persuit. This makes Whippets expert Frisbee players that are able to give the appearance of actually flying through the air when they make their airborne catches.

The Whippet in general, is a friendly docile breed that is most content when it is lounging around the home with his family. In spite of their well earned reputation as an athlete and hunter they are surprisingly at ease when they are at home. This combined with their lack of dog odor and extremely tight short hair makes them an excellent choice for an indoor companion in spite of their size.

While other indoor breeds will view your visitors with suspicion and hostility, the Whippet will usually view new arrivals at your door with curiosity and a willingnesses to socialize. Also, the Whippet can be extremely playful if you are willing to play the games that it likes. Any form of chase will do, as well as fetch with a well tossed Frisbee being its preferred toy.

The Whippet is truly a low maintenance dog as its hair is very short and it is an average shedder. It is not prone to any of the conditions that frequently plague other dog breeds, such as dry skin, so cleaning this odor free breed of dog is a simple matter of rubbing it down with a damp cloth from time to time.

Also, the Whippet should not be left outdoors for any extended length of time, as it is vulnerable to the cold due to its very thin coat. When training a Whippet, care should be taken not to speak too harshly with it, as it tends to be a very sensitive animal and can be traumatized by loud or rough treatment.

The actual name of the Whippet is derived from a whip due to its speed and agility and it was developed at the end of the 1800s by crossing the Greyhound with the Terrier and also the Italian Greyhound. However, depictions of a similar looking breed engaged in hunting has been found on Roman art work dating back some two-thousand years.

It was some time later that the Whippet found its way into the sport of dog racing which it also excelled at and was used extensivly for. It is important to note that during that time in England these types of sports that involved dogs were seen as entertainment that was confined to people who occupied lower stations in the English society which may have led to the delay in the Whippet being regognised by the English Kennel Club.

Also, the Whippet was extensively used for hunting, due to its speed and agility that was required for pursuing small game such as rabbit and fox in open fields. In spite of its extreme popularity it was not until 1891 that the Whippet received recognition from the English Kennel Club.

It was in the early 1900s that Whippets first appeared in the U.S. in Massachusetts, having been brought there by businessmen who operated mills who had branched out into the business of running dog racing facilities for the purpose of gambling. As the sport spread in popularity up and down the east coast, so did the popularity of the swift and agile breed of racing dog.

It was only a matter of time until the Whippet made its way into American homes as pets and they have grown in popularity ever since. The whippet is still used to this day for dog racing as well as for hunting and guard dog duties were a dog is preferred that lacks the vicious temperament of other breeds of dog that are more commonly used for watch purposes.

One new sport that has also developed recently and is fast gaining in popularity in the U.S. is Frisbee dog competitions, which the Whippet has emerged as a favorite breed of dog for its competitors. In this sport the dogs owner throw a Frisbee and the dog then pursues it and catches it in mid flight and is subsequently scored on its agility and its ability to jump to extreme heights.