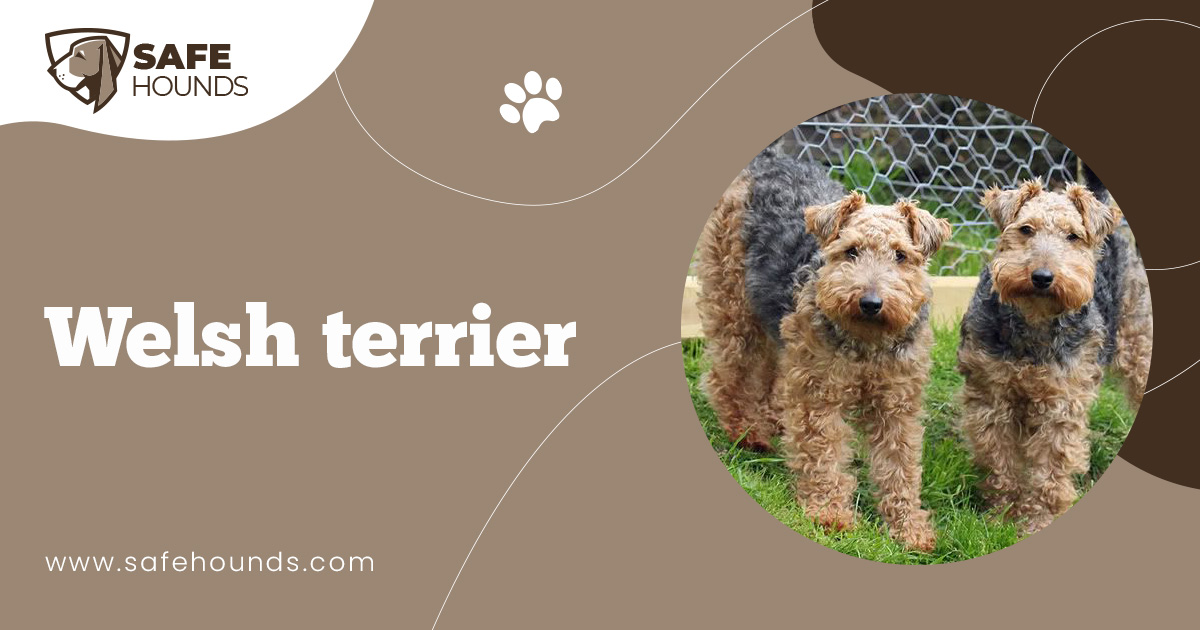 The Welsh Terrier or Welshie as it is affectionately known by its fans is a true terrier in every sense of the word. It is a smaller medium sized dog with a brown and black wire haired coat and facial hair that gives it the appearance of having a large bushie goatee.

For someone who has never owned a terrier and is smitten by the Welsh Terriers regal distinguished looks however, it is important that they give close consideration to what they are about to get themselves into before they run right out and bring home a Welsh Terrier pup. They are definitely a high maintenance breed that requires a good sized yard and plenty of stimulus to keep its mind occupied.

Left to their own devices and let out the front door to run the neighborhood, the Welsh Terrier is perfectly capable of wreaking havoc with your neighbors and their small pets. However, the Welsh Terrier is recognized as one of the least difficult, docile and most easily trained breeds of terriers.

Unlike other dogs that are just in it for the chase, a Welsh Terrier, just as with most other breeds of terrier will kill any small animals that they pursue and that includes cats or any other small pets that catch their eye and run from them. However, on the flip side the Welshie is a non stop source of amusement and has an almost human like intelligence and are well known for their playfulness.

They require some degree of obedience training from the start and then an ongoing program of training throughout its entire life to keep them in line. Terriers are aggressive dogs that were bred for hunting and rodent control and hence, are persistent non stop hunters. Once they have found something as small as a mouse or a lizard somewhere they will return to that spot every day like clock work in the hopes of finding another to flush out and dispatch.

The Welshie is an alert, fearless and persistent watch dog that has a sharp busy bark when it senses an intruder and makes a great companion to have in and around the home if you have the room for one.

The Welsh Terrier is a breed of dog that must be seen in person to fully appreciate its unique one of kind looks, as pictures just dont do it justice. Its the bushie goatee that catches the eye and creates for this breed of dog its, truly distinguished, European appearance.

Its elongated brick shaped head and bushy eyebrows only lends to the overall unique appearance of this active rascal of a dog breed. It has a curly medium length brown and black wire haired coat with the black coloring being predominantly located on its sides and back as well as its cropped tail.

However the Welsh Terrier is born black and will remain so for its entire first year, changing colors gradually as it matures. Its hair is also made up of two layers and both are thick, so it is prone to shedding. The Welshie is a smallish medium sized dog, with the males standing between 15-17 inches in height and weighing in between 20-22 pounds and the females being slightly shorter by around an inch and slightly lighter by approximately 3-4 pounds.

Its a sturdy active dog that is compact in appearance, but its size can be deceiving in that it does require the same amount of space and fence security as would a much larger breed of dog. Overall, the Welsh Terrier is an amusing dog to watch with its uniquely handsome looks and its busy, frisky demeanor.

It is truly ironic that the Welsh Terrier so closely resembles a poodle, because its temperament is anything other then that of a docile breed. This is not to say that this dog does not make a good pet, because it does make an excellent affectionate pet, but the Welsh Terrier should be paired with an owner that has the room and the time for it.

The Welshie knows no fear and will fight any dog regardless of its size if it is challenged to do so and it is also a relentless hunter that will pursue a mouse for days under a house if need be. So they can be rascals if they dont have a good sized yard with plenty of room to run and play in.

The Welsh Terrier does not require any special care other then a brushing of his or her coat and occasional bathing. However, there are a few things to consider due to the nature of this breed. For instance, because it is such a prolific hunter of small game such as rats and mice it can be more susceptible to worms which can be contracted from its small prey.

Also, special care has to be taken to insure that it stays out of mischief, which means an extra secure tall fence. The Welsh Terrier is a highly intelligent and crafty escape artist, so this should be taken into account when building its enclosure.

As dog breeds go, the Welsh Terrier is not an ancient breed but it is none the less very a quite old breed with pictures and artwork dating to the early 1800s being the first depictions of a dog that looks like it does. It is believed however, that the breed is the first original terrier and was developed in the mountains of Wales at least three or four hundred years ago.

The dog in the most dated pictures of it was referred to back then as a Black and Tan Wire Haired Terrier or an Old English Terrier. The dog has not changed at all since those early days, because its depictions from that earlier era resemble todays Welsh Terrier perfectly, in fact.

The breed that is now known as the Welsh Terrier was originally developed as a gaming dog that was used for hunting small animals such as rabbit and fox and was known for its courage as well as its propensity to pursue smaller game underground into its furrows which hounds are reluctant to do.

Also, Welsh Terriers in those earlier times served a double duty as rodent control dogs, because they were then and still are quite good at it. The first recorded classification of the breed known as Welsh Terriers was in the year 1884, at Cordovan where in fact, there were twenty-one entries that first year but even then many people continued to show their dogs under the breed name Old English Terriers also.

This practice went on up until the year 1893 when a Dog by the name of Dick Turpin was shown under dual classifications as both a Welsh Terrier and also as an Old English Terrier. It was a man by the name of Prescott Lawrence that brought the first Welsh Terriers to the North American Continent in 1888. He subsequently showed his two dogs at the old Madison Square Garden under the classification of miscellaneous.

It is not believed that any other Welsh Terriers were imported for several years other than the dogs that Prescott Lawrence originally brought in and showed. However, in 1901 a classification was created for the Welsh Terrier at Westminster and some dogs and their owners did show up for the first time then.

The Welsh Terrier subsequently gained in popularity and is known as the least quarrelsome and most easy to train and manage of all of the common terrier breeds. Some Welsh Terriers are more docile than others due to breeding since it was introduced to the U.S. and the North American Continent, so more and more people are finding them conducive to a domestic home environment, hence their popularity continues to grow to this very day.