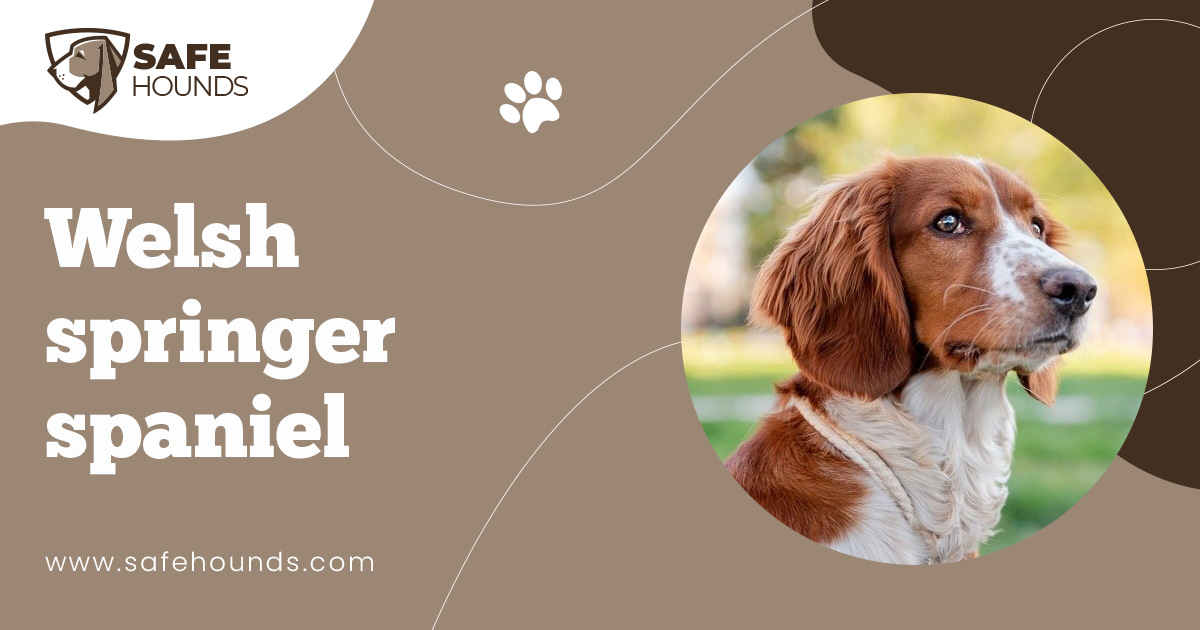 The Welsh Springer Spaniel is one of the many breeds of spaniels that have become so popular over the years in homes across North America and Europe due to their trainability and jolly gregarious personalities. It is an active, friendly and playful breed of dog that is medium in size and functions well in a home with a yard for it run and play in.

The Welsh Springer Spaniel is a stocky compact medium sized dog. It has a shaggy semi-long white with red coat that is generally fairly straight on the top and slightly more wavy on the sides and even more curly on the chest. The Eyes of this dog will tend to be dark colored leaning towards hazel and its medium sized fringed ears hang loosely on the side of its face and jowls.

There are several types of Spaniels and although they do share many similarities all of them including the Welsh Springer Spaniel do have their own physical and temperamental characteristics that set them apart from one another. The Welsh Springer Spaniel was bred as a hunting dog and has truly ancient origins. Unlike so many other breeds that are natural hunters, this dog also functions very well as a domestic house pet.

In fact, the Welsh Springer Spaniel in general loves family life, is fantastic with children and is a great dog to take on trips. It loves sticking its head out the car window with its ears flapping in the wind. As a pet around the home it does need a yard to play in and it also enjoys pulling guard duty.

It is a highly trainable intelligent dog that can have a busy bark when confronted by unfamiliar strangers in its territory but unlike other guard dog breeds it is not prone to biting unless it is provoked. Just as with so many other breeds that are natural small game hunters the Welsh Springer Spaniels favorite games are chase and fetch the stick.

The Welsh Springer Spaniel is a sturdy looking dog that appears to be stationed much lower to the ground then it actually is due to its straight to shaggy hair that will be longer on its neck, chest and lower sides. Its tail is docked to approximately one fourth of its original size and it tends to wag briskly when this hunter detects game near by.

At its shoulders it is ideally 18-19 inches in height for males and females will be about one inch shorter. Its colors are white and rusty-brown with the dark color located predominantly on its sides and back, beginning at its shoulders and on each side of its head including its ears. The Welsh Springer Spaniels head is unique for a Spaniel in that it is slightly longer with a medium length snout ending with a pronounced reddish brown nose with slightly flaring nostrils.

Of all of the features of this breed it is its luxurious coat that is most distinctive. Its hair is rather fine to the touch and brushes out beautifully. It ranges from fairly straight on its back to more wavy on its sides and even slightly curly on its chest. This dogs power is centered in its hind quarters and it shows in the way that it is built, as it has been bred for centuries to be able to easily push its way through the thick brush and brambles that it encounters as it hunts. Over all, the Welsh Springer Spaniel is a very handsome almost pretty dog with a noble serious look that is quite contrary to its affable playful personality.

The Welsh Springer Spaniel has well earned reputation for being an excellent choice for a home that has children and other pets, even including cats. However, its playful and easy going personality can tend to hide the fact that it is a dog that does not do well if it hasnt received some basic obedience training. It does better indoors than most dogs of similar size. but if given the choice would rather be outside chasing a Frisbee or a stick. This is because, it is an active outdoors breed that loves to go on hikes and explore any place that is full of green such as parks, rivers and lakes.

It is quite obvious at first glance the Welsh Springer Spaniel has a lot of hair that can become a problem if it is not tended to periodically. This means that it has to be checked for burs and parasites such as ticks often if it is living in a rural area. Also, it should be brushed every now and then as well, particularly if it is going to spending any amount of time inside of the home. Summer time is a time to consider having its hair clipped shorter particularly in warmer climates and the result will be a more happy playful companion.

As dog breeds go, the Welsh Springer Spaniels history and lineage is fairly ancient as it has been dated as far back as 7000 BC by researchers. If this is so, then this would make the ancestors of this breed one of the first dogs in history to ever be used for hunting purposes by humans. However, these same ancient ancestors of the Welsh Springer Spaniel are also the same line of early hunting dogs that many other breeds of spaniels trace their lineages to as well.

It was along the coastlines of Scotland, Wales, Brittany, Ireland and Cornwall that Mesolithic semi nomadic bands of hunters first used the ancestors of all of todays domestic hunting dogs to detect and assist in the killing of game of all sizes. As history progresses, we find the ancestors of the Welsh Springer Spaniel having developed into the Agassian hunting dog, which was being used for hunting by the tribes of Roman occupied Briton two thousand years ago.

It was in Medieval Europe that this same line of hunting dogs was further refined into a type of hunting dog that was commonly referred to as the Land Spaniel which has been depicted in artwork of that era. These depictions, mainly on tapestries, show a retrieving dog that is quite similar in appearance to the Welsh Springer Spaniel of today.

The Welsh Springer Spaniel remained a favorite of the aristocracy and landed gentry up until the 1800s when other spaniels and breeds of hunting dogs began to gain in popularity and replace the Welsh Springer Spaniel as the dog of choice for huntsmen in all regions of Europe. In fact, it was during the time that it was most popular that it was given the name Springer in recognition of its skills at flushing or springing game in the field during hunts.

It was also during these times in Europe that the dog that we know as the Welsh Springer Spaniels was often referred to as the Welsh Cocker and the Welsh Spaniel. It is important to bear in mind that during those earlier years in Europe there were no kennel clubs to regulate breeding, so often times spaniels were inter bred. It was during the late 1800s that the Welsh Springer Spaniel found its way to America where breeders and sportsmen took an interest in it and it once again began to soar in popularity culminating in it being recognized by the American Kennel Club in 1906.