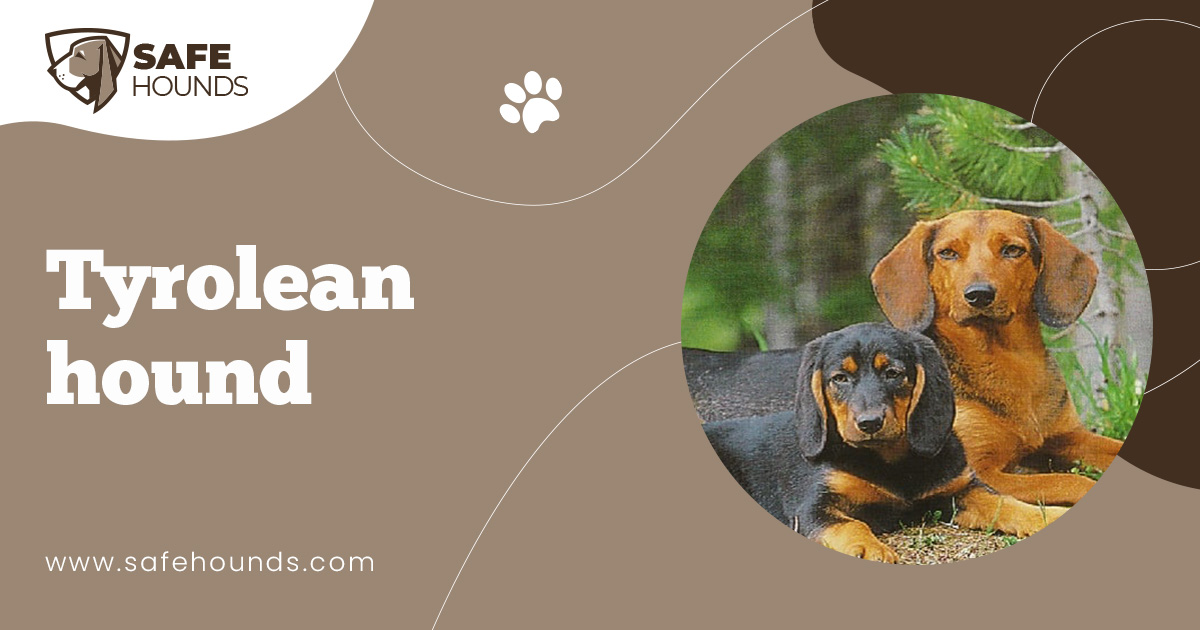 The Tyrolean Hound is one of the Grand Brackes of Austria the dogs that were developed to hunt in the high altitudes of Austrian mountains. The other two are the Austrian Black and Tan Hound and the Styrian Coarsehaired Hound. Both the Austrian Black and Tan Hound and Tyrolean Hound has descended from the Celtic Hounds. Development of the Tyrolean Hound was started in 1860 in Tyrol County. In its country of origin, this breed is commonly known as Tiroler Bracke. Bracchet Autrichein a Poil Lisse is another name for this breed.

A Tyrolean Hound is a medium sized short haired scent hound. The dog has a thick double coat that comes in two basic types, a red coat or a black and tan coat. A very distinct physical feature of this breed is the small double chin that usually has a pink cheetah-like rash. This breed stands from 16 to 19 inches and weighs from 33 to 48 pounds. Earlier in the history of this breed, a short legged variant existed but in 1994, the said type is no longer accepted by FCI. As mentioned, the Tyrolean Hound was primarily developed to hunt. This breed is well adapted to the high altitude of the Alps and to the harsh environment. This dog weathers both the frigid winters and the steamy summers. The Tyrolean Hound is a remarkable hunter of rabbit and hare but this breed is highly valued by Austrian hunters for being an excellent Nachsuchenhund  a hunting dog that is utilized to find wounded or sick deer. The good nose and the excellent tracking and trailing ability makes this breed a very capable after the shot hound. This passionate hunter has a good sense of direction and consistently gives tongue while trailing to alert the human hunter when a prey is found.

The Tyrolean Hound is an ultimate hunter that is usually hunted singly. This breed would love nothing more than to be with its master on the mountains and to do what it was expressly developed for to hunt. However, this breed is intelligent and easy going. It has a lively and energetic personality. These qualities make this breed fit well to home life.

A Tyrolean Hound is a medium sized dog with a rectangular shaped strong, muscular and sinewy body. This dog has a broad lightly arched skull with a well defined stop. The muzzle is moderately deep and straight. This dog has a slightly protruding black nose, short close fitting lips and strong teeth that meet in complete scissor bite. Large eyes with dark brown irises are not too deep set. Broad ears with rounded tips are set on high and hang close to the sides of the head. Dry neck is moderately arched.

This breed has a long trunk with well pronounced withers. The moderately broad back is taut and straight. Loin is of medium length. The moderately broad chest is very deep. Forechest is well rounded and belly is slightly tucked up. Long tail that reaches the joint of the hock is set on high. Thick brush-like tail takes the shape of a sabre and carried high when the dog is excited. This breed has a very fast ground covering gait because of the well angulated upper arms and the strong well muscled limbs. Strong feet have tightly closed well arched toes.

A Tyrolean Hound has a thick double coat. Undercoats are generally soft and fine. This breeds undercoat though is coarse. The dogs belly is well covered with hair, the buttock is feathered and the thick hair that covers the tail forms a brush. There are two types of coat colors – a red and a black and tan. Colors of the red coat type can be red, red fawn or deer red. A too pale fawn color is not accepted. The black and tan coat type is characterized by a predominantly black coat or a black saddle with tan markings on the head, belly and legs. Tan or red markings are not clearly defined. The dog may also have Vieräugl, tan markings above the eyes.

A passionate hunter with a fine scenting ability, one that is acclaimed for its endurance to hunt in difficult terrain and under harsh weather conditions, a hunter of fox, rabbits and hare and a tracker of game wounded by a shot gone bad the Tyrolean Hound. However, this breed that was primarily developed to be a hunter is noted for it intelligence, for its spirited and lively nature. Yes, this dog is a courageous and an independent worker but it is also sociable and forms a strong bond with its master. A Tyrolean Hound may have a hounds stubborn streak but in the hands of a firm owner and with consistent positive training methods, this breed will become child friendly and will tolerate other dogs in the household.

A Tyrolean Hound is not one for apartment living. Because of the dogs high exercise requirements, a large yard will be needed to ensure that the dog will be provided with opportunities to run and play and to use up its excess energies.

Ideally, short coated dogs would need to be brushed or combed once a week to remove any loose hair. The Tyrolean Hound has a double coat. The under coat is harsh thus, the dog would need a more thorough brushing. Being a hunting breed, the dog has the tendency to get extremely muddy and dirty after it has been on a hunting trip. The dog may also pick up thorns and external parasites. It is therefore very necessary to check, to and clean and even to bathe the dog after it has been hunted. Dogs that are kept as house companion do not need frequent bathing. Grooming would be as easy as brushing the dogs coat once a week.

Austria has contributed several outstanding breeds to the canine world. This country is the home of the notable Alpine Dachsbracke, a scent hound that has a remarkable ability to track a game hours after the scent has gone cold. The three breeds of hunting dogs collectively known as the Grand Brackes originated from this mountainous and game-rich country as well. It is widely accepted that most European breeds of hounds have descended from the Keltenbracken or the Celtic Hounds. The Austrian Black and Tan Hound and the Tyrolean Hound, two of the Grand Brackes have a rich history. Both were speculated to have originated from these ancient Celtic Hounds that have existed throughout the Alps and were favored and used by royalty and warriors during the Middle Ages. The Tyrolean Hound is presumed to be the oldest of the Grand Brackes. The breed took its name from the place where it was originally developed. Tyrol is a state located west of Austria. This country that borders the Swiss and the Italian Alps was once a country of the Holy Roman Empire. Maximilian I, the Holy Roman Emperor is said to have kept and used these densely and double coated hunting hounds during the early 1500s. The emperor has mentioned in his hunting diaries that his lead hounds were taken from these noble hounds.

Several German and Austrian hounds were developed from these Alpenbrackes. By 1860, hunters in Tyrol have started selecting and developing their favored types of hunting dog. One of the breeds that were developed is the Tyrolean Hound. The first breed standards was written and accepted in 1896. On the same year the breed was first exhibited at Innsbruck.

Tyrolean Hounds are generally kept as hunting dogs in Austria. Unlike the Austrian Black and Tan Hound and the Syrian Coarhaired Hound that are confined in its country of origin, the Tyrolean Hound has gained access to other European countries.