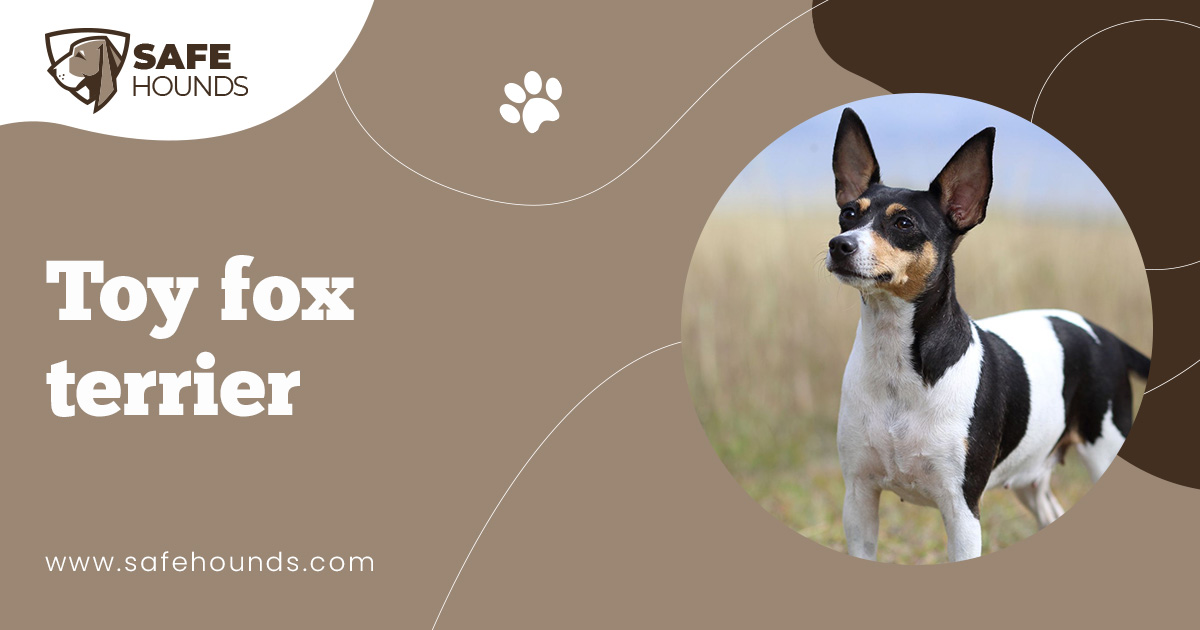 If you are only around a Toy Fox Terrier for a few short minutes, you will still be able to recognize that he is a true toy and a true terrier from his character and his personality. Of course, the terrier in him gives him high intelligence, vibrancy, and courage, while the toy gives him devotion to his family and his adorable tiny size. This breed is well-balanced showing grace, agility, strength, and stamina.

All terriers are quite lively and the Toy Fox Terrier is no exception. Along with their lively behavior, they do have a voice, however, not all of them bark all the time, many only bark when it is necessary such as a stranger approaching or other times such as greeting their masters or wishing for a treat.

This breed is a very loyal breed to their family but because of their size should be watched closely around small children, as they can be injured accidentally by all the hugs eager little children wish to give.

With both males and females the Toy Fox Terrier is around 8½ inches to 11½ inches tall and weigh 3½ to 7 pounds. Even though he is a small breed, he has a muscular and athletic appearance.

The coat of the Toy Fox Terrier is similar to that of the Smooth Fox Terrier being shiny with a satiny texture that is very smooth to the touch. The coat can be in tri-color, which is a black head with tan markings on the cheeks, lip, eye dots, while the body is mostly white or can have black spots. Chocolate, tan, and white with chocolate mainly on the head, tan on the cheeks, lips, eye dots, with the body mostly white. White and tan with the head being mainly tan and the body mainly white. White and black with the head mostly black and the body mainly white.

The eyes should be bright and dark with dark eye rims except for the chocolate coated in which the eye rims will be match. The eyes themselves are round and do not bulge. Ears are set high, pointed in an inverted V-shape, and close together. The nose is always black except once again with the chocolate. Scissor bites are preferred.

The topline is level, body is balanced, tapers just a bit from the ribs to the flank. Their tail is high, erect, and will be proportionate to the size of the dog. It will be docked to either the third or the fourth joint.

The Toy Fox Terrier has all the energy you see with the Fox Terriers only in a smaller body. His passion is still strong as ever and in his mind, he is the biggest dog on the block. His puppyhood nature of curiosity and activeness stays with him as he matures making him a fun loving family member. However, he does have a stubborn streak and may at times not wish to behave the way in which his owners would like, but this is part of his charm. He is very intelligent and easy to train. He is loving, alert, highly sensitive to the emotions of his family, curious, and fast.

He still has terrier instincts and will fight off small prey such as mice or other vermin. He does love affectionate and is very loyal to his family.

Apartment living is perfectly fine for the Toy Fox Terrier as he can be just as active indoors as out. He does need a daily walk because he is an active breed. Taking him outdoors to play is a great idea, however, he does require the walk. Toy Fox Terriers that do not receive their daily walk are more likely to show behavior problems. When walking your Toy Fox Terriers in cooler weather be sure to let him wear a sweater, as they do not do well in colder climates.

Grooming the Toy Fox Terrier is a breeze. You will only have to comb or brush his coat occasionally. On the other hand, you will need to keep his nails trimmed.

This breed is prone to allergies to such items as beet pulp, corn, and wheat.

During the early 1900s, the Smooth Fox Terrier was so popular throughout America that RCA Victor began to use one for their logo. From there the runts of the litter were crossbred with Chihuahuas and Italian Greyhound until the Toy Fox Terrier was created.

This adorable toy dog was noted for his help around the farm being noted in The Toy Fox Terrier, authored by Eliza Hopkins and Cathy Flamhotz, The handlers would poke the rats from under the old log houses and the little dogs would catch them. When the day ended, the dogs had accounted for 74 rodents.

They were also often seen along side traveling entertainers. The Toy Fox Terrier could be carried along rather easily, did not eat that much, and performed amazing tricks for audiences around the US. Through this time, he was known by various names such as trick dog, circus dog, and little fiest dog.

The United Kennel Club began in 1912 registering the Smooth Fox Terrier and the Toy Fox Terriers, however, they were not recognized with their own classification until 1936.