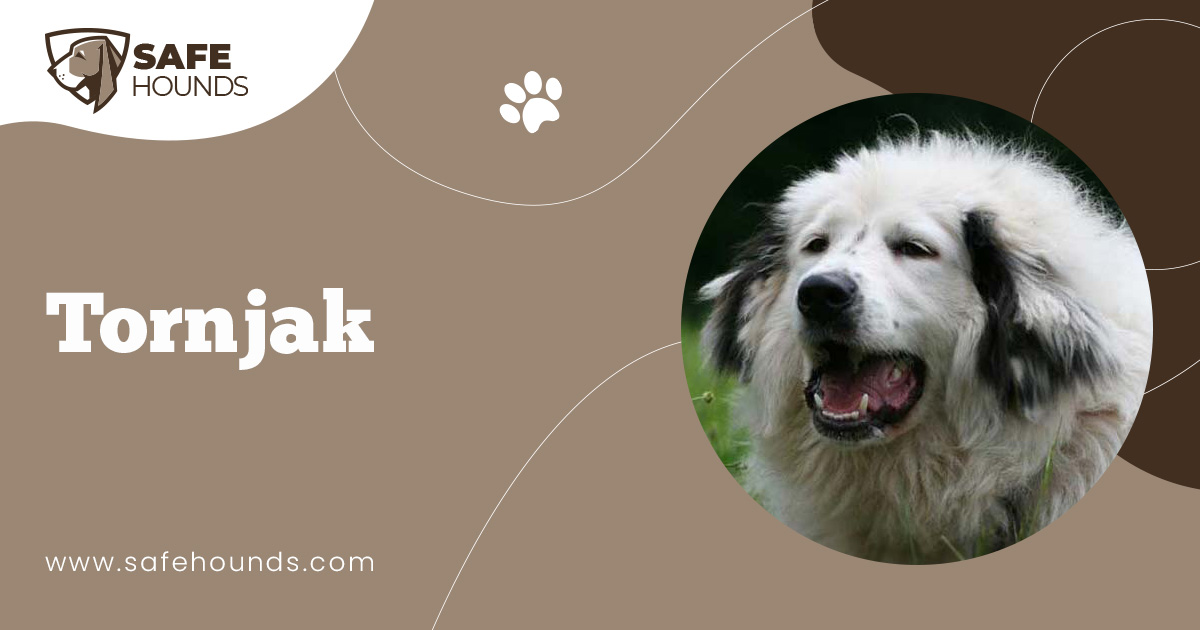 A large strong well built dog is moving amidst the sheep. The unhurried, dignified and harmonious movement exhibits the dogs self confidence. The predominantly fluffy white coat has tricolored markings making it easy to differentiate the dog from its baaing and bleating charges. The impressively plumed tail that is carried like a flag indicates the dogs exact location among the herd. This dog, the Tornjack is one of the many breeds of livestock protection dogs. This breed hails from Bosnia and Herzegovina. This very ancient breed is believed to have existed for over 2000 years. Ancient written documents described a breed that has practically remained the same over the years. Of course, the dogs then were known under a different name. The documents referred to Hrvatski pas planinac which means dogs from the mountain. The name was later on changed to Canis Montanus. However, because the dogs are seen among the sheep day and night, the name Tornjak became more popular. Tor is a Croatian word that refers to a sheep enclosure.

Early Tornjaks were originally utilized for herd protection. These are not aggressive dogs but they do take their work seriously. A Tornjak is a very protective breed. Owners of this breed have recounted how the dog would chase away bears and how it would not be daunted with the need to fight two wolves. Unlike herding dogs, this breed is less agile and somewhat indifferent to its surroundings but dont be misled by the dogs complacent demeanor. These dogs are very protective and will not allow anything or anyone to harm its flock. The flock also includes its human family.

A Tornjak has a high level of intelligence. This should make training easy. The dog does not need training to guard it charges but in later years, Tornjaks are commonly kept as home protectors and as pets. As such the dog would need to be trained. This dog though would ignore the sit, roll, fetch and similar commands. The dog is not stubborn but it will be indifferent to the inane commands.

The Tornjak is a large dog. The almost square shaped body is well proportioned allowing the breed to be agile and to have a well balanced and long harmonious long reaching gait. This breed is a mountain sheep dog thus it is expected to be strong boned, well muscled and to be thickly coated. This breed has an elongated head although the hind part of the skull is moderately wide. The stop is slightly pronounced. This breeds rectangular muzzle has a perfectly straight nasal bridge. Large nose has wide nostrils and have dark pigmentation that harmonizes with the color of the coat. Almond shaped brown or darker colored eyes have close fitting darkly pigmented lids. Eyes have a self-confident, serious and calm expression. A Tornjak has long strong jaws. Younger dogs have teeth that meet in a scissor bite. Older dogs have incomplete set of teeth that are not unlike pliers. Triangular, medium sized ears are covered with shorter hair, set on high and hang down close to the cheeks. These folded ears are very mobile. On the move, the earlaps are positioned at the back of the head uncovering the ears external auditive aperture.

The medium length neck is tightly fitted with skin and abundantly covered with hair that forms a mane. The powerful neck is carried somewhat low. The Tornjak has moderately developed withers, a short, straight and moderately broad back. Oval shaped chest is deep and broad, reaching the level of the elbows and providing sufficient lung and heart space. The belly is well muscled, the underline not tucked up. Set at medium height, the long abundantly coated tail is very mobile. The beautifully plumed tail is one of the assets of this breed. A plumed tail raised over the back when the dog is on the move is a typical characteristic of this breed. The long coat of a Tornjak allows the dog to stay outdoors during extremely cold weather. The hair is short on the face, on the muzzle and on the legs but especially long on the withers, on the back and on the upper part of the croup. Dense long hair on the upper thighs forms breeches. The coat is predominantly white with various markings that range from red, brown, yellow, grey and black in color.

A Tornjak is an outstanding working breed. The dog is highly valued for being a good protector of livestock. In recent years, these dogs that are accustomed to staying with the flock have invaded the homes. These dogs are now kept as guard dogs and home companions. This is an incorruptible breed. The dog is suspicious of strangers and would show it fierce nature if a slightest danger to the family or to the property entrusted to its protection is perceived. A Tornjak though has a stable temperament, friendly, calm and affectionate to its family. The dog would not say no to patting and cuddling especially if bestowed by the younger members of the family. This breed will not show an aggressive temperament against other dogs but will not back out from a fight.

This is not a high maintenance breed. A Tornjak would not need extensive grooming as occasional brushing would be enough to maintain the good condition of the coat. This breed though has high exercise requirements thus it is not suited for apartment living. A home with a large backyard would ensure that the dog can exercise on its own. This breed is accustomed to sleeping outdoors even on the snow but the dog would benefit from adequate shelter. Tornjaks have modest feeding needs. The dog was originally fed a low protein diet. Giving the dog a high protein diet can actually damage the beautiful coat.

The Tornjak belongs to the Canis familiaris matris optimale family. This rare breed of livestock protection dog calls Bosnia and Herzegovina home although breeding are mainly concentrated in Vlasic, the mountainous areas in the central part of the country. The Tornjak is a very old breed but unlike other breeds with obscure histories, the existence of this livestock protector is backed up by written documents. Tornjacks have exited over 2000 years ago. The oldest document pertaining to the existence of this breed was written in 1062 and found in the archives of the bishop of Djakovo. Another written report was done in 1274 by Peter Horvat, the bishop of Djakovo. In the canon of the Djakovo diocese, a written report done by Peter Lukic in 1752 described the dog that inhabit the hilly country that is under the jurisdiction of the bishop of Djakovo. These Catholic Church documents verified the veracity of the breeds ancient existence. These lands then form parts of the Kingdom of Croatia and Dalmatia territories. These dogs were believed to have existed in Croatias Dinara Mountain region and in the Vlasic region of Bosnia since the Roman times. Very large and powerful, the dogs were used by the Romans as war and guardian dogs as well as fighting dogs in arenas.

The dogs were registered as Kanis Montanus which means mountain dogs but they are popularly known as Tornjak. The name was derived from the Croatian word tor which means an enclosure or a pen where sheep are kept. Livestock guardian dogs are believed to have developed from the ancient breeds of LGDs that have followed the transhumance migration. These large dogs were needed to protect not only the stock but also the nomads in the long stretch of the great migration. The Tornjak was speculated to have developed in Mesopotamia. Tibetan Mastiff and similar types of guarding dogs came with the migratory nomads to the Balkan Peninsula 7000 years ago. Another theory believes that this breed was developed from the livestock guardian dogs brought by the Croatian shepherds. The dogs were subsequently crossed with other breeds already existing in the Balkan Peninsula. The breeding resulted to the creation of the Tornjak, a strong and healthy breed of livestock guarding dog that has modest food and shelter needs and has adapted well to its environment.

In 1970s, breed population has fallen drastically low. The Tornjak faced imminent extinction. In an effort to restore the breed, enthusiasts have scoured Croatia, Bosnia and Herzegovina in search for remaining specimens that matched the description on the ancient manuscripts. On May 9, 1981, the Tornjak was registered as an autochthonous breed with the official name of Boznian-Herzegovian Sheepdog – Tornjak. A Tornjack breeding commission was established in Zagreb (Croatia). Under the supervision of the Croatian Kennel Association the breeding program was started in 1982. The first breed standard was written on October 5, 1990 in Travnik, Bosnia. In 1997 more than 200 pedigreed Tornjaks were registered. The breed is as yet unrecognized by FCI but a commission was formed to have the breed internationally recognized.