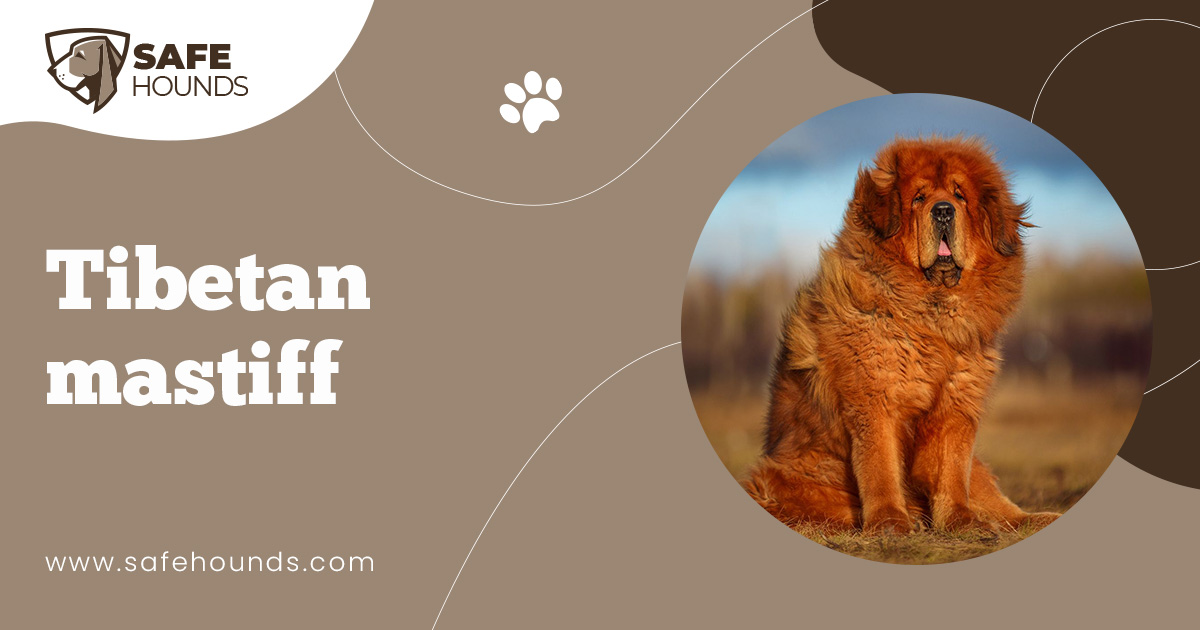 The Tibetan Mastiff is a rare, large, ancient dog also known by Do-Khyi and Tsang-khyi originally found in Tibet, China.

The Tibetan Mastiff is one of the largest breeds of dogs known for its strength and courage to stand strong against predators such as wolves and leopards to protect its flock. He not only is large enough to scare away any would be burglars but his bark is sure to wake all your neighbors. In his native land of China and surrounding areas, he is known as the defender of women and children.

When you first see this huge dog you may believe he is one to stay clear of, however, he is just as adorable and friendly as he is big. His size fools many, but on the other hand, if he does not the person he will surely keep them far away from his family until he realizes they are not a threat. The Tibetan Mastiff found in Tibet today can still be quite aggressive and unmanageable, however, with the proper training they are great companion dogs that love their family. Training should begin while the dog is in puppyhood to ensure they are well adjusted to family and what is expected of them.

The Tibetan Mastiff can be as tall as 31 inches or more but on average, they stand around 25 to 28 inches while weighing between 100 to 160 pounds or more. He is one of the largest dogs known in the world.

He has a beautiful double coat that comes in various colors including solid black, brown, and blue/grey including some with tan markings or a variety of gold shades. The tan markings can range from a light tan to a rich darker shade. The tan markings are acceptable above the eyes, around the eyes, on each side of the muzzle, the neck, the lower part of the front legs and on the inside of the back legs. The outer coat is thick and coarse with males having a thicker coat than the females. The undercoat is heavy and soft.

The Tibetan Mastiff has an expression of nobility along with an intelligent and watchful demeanor. His eyes show expression and are brown with black or blue/grey rims. The eyes are set deep and well apart and are almond shaped. The ears are V-shaped, pendant and of medium size. The teeth can be either meet in a level or scissor bite. The stop is deep and well defined while the muzzle is broad and large.

His back should be muscular with straight legs with coarse feathering hair. The feet are cat-like, large, strong, compact and can have feathering between the toes. The toenails should be black or white with a single dewclaw on the front feet. If dewclaws are present on the back feet they can be removed this is optional.

The Tibetan Mastiff is above all else, a guard dog as he was left to guard not only homes in Tibet but also entire villages. However, this does not necessarily mean he is aggressive. He is very loyal and loving to his family or flock, even though he is a bit wary of strangers. He enjoys playtime with children but because of his size should be watched closely with smaller children. He is very dignified, calm, thoughtful, extremely loyal, protective, and territorial. They are also known for being very intelligent and patient. Training can be a problem as they are a bit strong willed. However, with gentle training they do very well.

The Tibetan is not a good breed for apartment living. He needs a large yard in which to roam, however, he is an excellent climber and digger and can easily climb a five-foot fence or dig under it if not placed a bit underground.

He does need exercise, but not jogging. Long walks are the best. He is not the type of dog to enjoy playing ball or catching Frisbees. You will need to be sure he does not over exercise, as this can be hard on his joints due to his size.

During either spring or summer, he will shed for about a four-week period. During this time, you will need to brush him every day for at least half an hour to rid his coat of excess hair.

The first record of a large dog in China was in 1100 BC according to the skulls that have been found in the area. Many believe ancestors of the Tibetan Mastiff worked along side the armies of the Assyrians, Greeks, Persians, Romans, and later traveled to Europe along side Attila the Hun and Genghis Khan.

Since it was not allowed for Westerners to travel into Tibet until after the early 1800s, there is little known about any of the Tibetan dogs. Captain Samuel Turner in his record, An account of an Embassy to the Court did make mention of large dogs however, he did not give any type of description.

Lord Hardinge, Viceroy of India gave a large dog by the name of Siring to Queen Victoria in 1847. The Kennel Club in England compiled the first Stud Book, which included 4027 dogs in 1873. In this record the large dog from Tibet was designated the name of Tibetan Mastiff.

From that time, a few more were imported into England including two in 1874 by the Prince of Wales whom became King Edward VII, in 1928, Hon. Colonel and Mrs. Bailey imported four and in 1931, Mrs. Bailey established the Tibetan Breeds Association in England.

During World War II and up to 1976 there were no known imports. However, after 1976 importing was on the rise from several countries. During the late 1950s, two Tibetan Mastiffs were given to the President of the United States from Tibet, however, the dogs were placed on a farm somewhere in the Midwest and never heard of again.