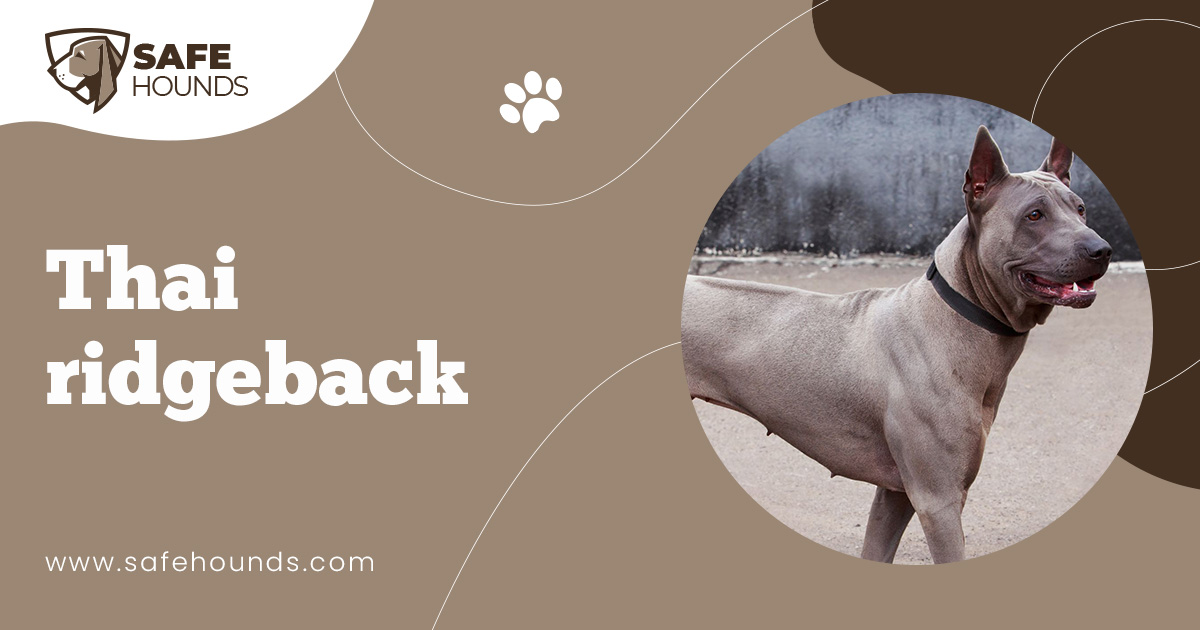 The Thai Ridgeback is a primitive and ancient breed that originated in the country of Thailand. In times past, this breed was only known in Thailand. In more more recent times, this breed is becoming more common in the Western world although it is still rare. The Thai Ridgeback has a unique characteristic that it shares with only three other breeds. It has a ridge of hair on its back that runs in the opposite direction of its coat. The only other dogs that have this characteristic is the Phu Quoc Ridgeback and the Rhodesian Ridgeback. The Thai Ridgeback is mostly independent and undomesticated because of its isolated nature, which has led to little human interaction.

The Thai Ridgeback is an intelligent dog that is protective of its family. They are a tough breed. This breed tends to be protective of its owner and family. On the negative side, many times they are quite aggressive with strangers and other dogs.

The Thai Ridgeback is one of the oldest breeds in the entire world. They are a medium sized dog with a short coat, prickly ears, and head that is wedge shaped. This breed has an unusual look because of the wrinkly look around its face and neck. This breed comes in a variety of colors such as red, fawn, blue, chestnut, and black. It is more rare for this dog to have a white color. The Thai Ridgeback is a common example of what transpires when a dog breed becomes isolated. This is a unique breed.

The life expectancy of the Thai Ridgeback is between 12 – 13 years. This breed is recognized by the AKC-FSS, APRI, FCI, ACR, ATRA, NKC, and KCTH.

The Thai Ridgeback is an intelligent dog. They are a mostly undomesticated breed because of the little human contact they have received due to their isolation. This breed is independent minded and are prone to being aggressive with other dogs and people. On the other hand, they are protective of their family.

The Thai Ridgeback will do better with an owner who is dominant and has a good understanding of this breed and dog behavior in general. A first time dog owner really shouldnt own this breed. The Thai Ridgeback makes a good watch dog, guard dog, and hunting dog. It has also become valued as a companion dog. This breed can be difficult to train. It is important to train this dog from an early age. Without the proper training, this dog can grow up to be aggressive.

The Thai Ridgeback does not have a history that is completely documented. There is a lot of theory as to the origin and development of this breed. It is known that the Thai Ridgeback was developed in the country of Thailand. It is thought that the Thai Ridgeback mutated from similar Thai dogs that looked similar but did not have a ridge on its back. From rock art, it is surmised that Thai dogs would accompany hunters over 2000 years ago. This was during the new stone age. Because of the isolation of the Thai villages in times past, these dogs were inbred for hundreds of years. This has resulted in a very uniform appearance for this breed. Many negative traits have been removed over time through natural selection. There is not conclusive scientific proof but some speculate that the Thai Ridgeback is related to the Rhodesian Ridgeback.

The third ridgeback breed that still exists today is the Phu Quoc dog found in the country of Vietnam. This dog is a little smaller than the Thai Ridgeback. There is a breed called the Funan Ridgeback dog that originated over 1000 years in the past. Based on available evidence, some think that both the Phu Quoc and the Thai Ridgeback descended from this breed. DNA studies are being performed to try to determine the link between the aforementioned breeds.