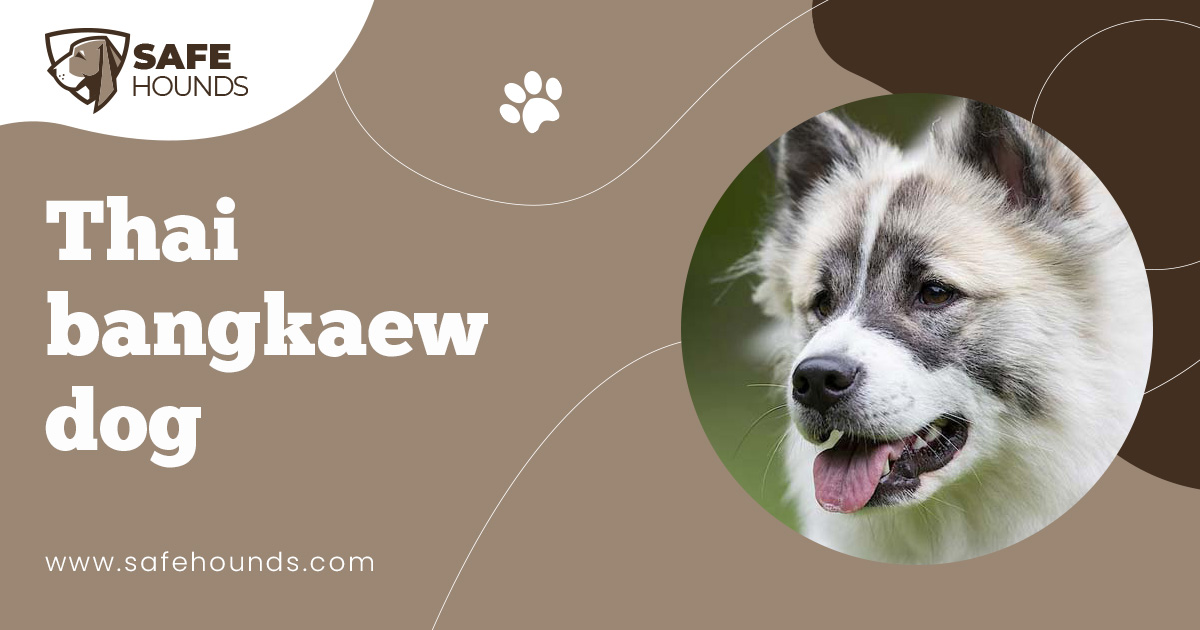 Dogs love to dig! We know that these lovable though at times exasperating creatures are the ultimate treasure hunters. But one breed of dog is noted for its highly developed digging skill. This breed can make a magnificent subterranean cavern. You would think that the dog has bagged the contract of making the set for an eerie sci-fi movie. Because this amazing underground tunnel can be completed only in a matter of days, you would truly admire the digging skill of this dog. This breed that is noted for its remarkable ability to reshape the landscape is the Thai Bangkaew Dog.

The Thai Bankaew Dog is a medium sized compactly built Spitz type breed. Males measure from 19 to 21 inches and weigh from 40 to 45 pounds. Females stand from 17 to 19 inches and weigh approximately 30 to 40 pounds. This agile dog has a smooth effortless gait. The thick predominantly white double coat is decorated with all shades of red, black, grey and brown patches. The dog never fails to get second looks because the lion-like ruff and the well plumed tail are truly eye catching features of this breed.

This breed originated from Thailand. The dog is said to have been developed by Luan Puh Maak Metharee, the respected third abbot of the Wat Bangkaew Temple. Bangkaew which means Crystal Village is situated in the Bangrakan District of the Phitsanulok Province in the central region of Thailand. TBDs are commonly kept by the Yom River houseboat residents making the dog excellent swimmers. These are very agile and energetic dogs. A TBD was developed to be a companion dog. The dog is very alert, watchful and protective of its family. The high level of intelligence should make training the dog easy. However, in spite of the loyal and affectionate nature, the dog has a stubborn streak. A fainthearted and an easily discouraged owner will be daunted by the task of training the dog. Training conducted in short sessions and with lots of positive reinforcements work best for this breed.

The Thai Bangkaew Dog is a medium sized spitz type dog. The proud head, the square shaped compact and well proportioned build and the brisk effortless gait presents a breed of dog of immense agility, strength and alertness. The strong dry head is well proportioned to the body. The stop is moderate. Medium in length and in width, the muzzle that is neither snipy nor coarse tapers towards the black pigmented nose. Erect triangular ears that are proportionate to the size of the head are set on high. Strong teeth meet in a scissor bite. Well muscled arched neck proudly carries the head and gracefully blends into the sloping shoulders. A TBD has well muscled and moderately laid back shoulders. The back is straight, the topline level. The dog has a moderate forechest and a deep chest that reach the level of the elbows. The firmly muscled loin has a moderate tuck up.

Strong forelegs are moderately boned, straight and parallel when viewed from the front. Short pasterns are slightly sloping. Parallel and moderately spaced hindquarters have moderate angulations. Round feet have tight and arched toes. The breed has the typical spitz tail. The tail is long, has a thick base and well plumed. Well set on, the tail is carried over the back with an upward curve. This Asian breed has a medium length double coat. The soft undercoat is thick and full. Long and harsh guard hair grows through the undercoat to form the outer coat. Thicker and longer hair around the neck and chest forms an impressive lion-like ruff. This ruff is well developed on males than on bitches. The long outer coat that extends from the withers to the croup, feathers the forelegs and covers the hind legs to the hocks enhances the attractive appearance of this breed. The predominantly white coat has a wide variety of black, brown, gray and red markings.

A Thai Bangkaew Dog is first and foremost a home companion and a protector. The dog is used to hunt snakes but its prime purpose is to protect its family. A TBD is often seen calmly sitting atop high objects on tables, on top of the dog house and on any other high objects where it can easily keep an eye on all the things it has to protect. The dog is wary of strangers and known to show an aggressive temperament towards other dogs. Obedience training and socialization is imperative for this breed.

The thick beautiful coat is one of the assets of this breed. This type of coat though would not require extensive maintenance. No professional grooming is necessary for this breed as an occasional brushing will be enough to keep the thick double coat in good condition. This fairly healthy breed is expected to live up to 14 years as aside from minor eye diseases the dog does not have any other major health concerns. An owner wanting to have this breed for a pet must be aware of the dogs high exercise requirements. This is a very active breed, one that has the penchant to dig. The dog must be provided opportunities to exercise to lessen its inclination to dig and to develop destructive behaviors.

Thailand is on the top 10 list of countries with biggest dog population. This Asian country is estimated to have approximately 9 million pet dogs. The streets of Thailand are practically littered with dogs some are owned, most are not. Large concentrations of these dogs are found around temples. A Thai temple would be a haven for these dogs as a Buddhist monk will not let stray or owned dogs starve.

As the name suggests, the Thai Bangkaew Dog is one of the Thai breeds. This spitz type dog is believed to have been developed over 100 years ago. The breed was named after its place of origin, the Bangkaew village situated in the Bang Rakan District in Thailands central region province of Phitsanulok. Located in this village is the Wat Bangkaew monastery. The TBD was developed by the 3rd Abbot of Wat Bangkaew Monastery. Luang Poo Mak Metharee is renowned for his love of animals. This merciful monk kept numerous animals. Dogs, cats, doves, Bantam hens and many others took refuge in the monastery under the care of the old monk. As the story goes, a Bangkaew villager gave the monk a native black haired Thai bitch. The monastery is situated in a forest inhabited by elephants, wild boars, jackals and many other wild animals. Dholes, the Asiatic wild dog abound in the area as well. The bitch given to the monk is about to whelp and it was speculated that it may have mated with a jackal or a dholes. The bitch produced long haired black and dark brown puppies.

The Song, a race of Thai people have migrated and settled in the Huay Chan village. The settlement is about a mile away from the Bangkaew village where the TBDs have flourished. The Song people are cattle raisers and when they migrated they brought along their herding dogs. The people in both villages established trade and the interaction resulted to the development of the Thai Bangkaew Dog as mating of the dogs that visit along with their masters would be inevitable. From these mating, the foundation stock of the TBD was produced. The dogs were kept by the houseboat residents of the Yom River as pets. The breed has remained pure as no other breed has contributed to the gene pool. The estrus cycle of the bitches that peaks from September through February coincides with the seasonal rain that causes flooding and cuts off the Bang Kaew village from the neighboring villages. The TBDs were line bred as the flooding acts as a natural barrier that hinders other breeds from being introduced to the dogs. The Thai Bangkaew Dogs have spread widely and became one of the most favored Thai breed.

Unfortunately, similar to other breeds, the TBDs popularity waned. In 1983, the breed is close to extinction. Purebred specimens are seldom seen due to massive crossbreeding. A group of breed enthusiasts from the Chum Saeng Song Karm community and Dr. Nisit Tangtrakarnpong, a veterinarian from Phitsanulok province have started the Bang Kaew Khuen Thin (Bangkaew Goes Home), a program aimed to restore the breed. The restoration project was successful. The Thai Bangkaew Dog is the pride of Phitsanulok province and one of the most popular Thai breed.