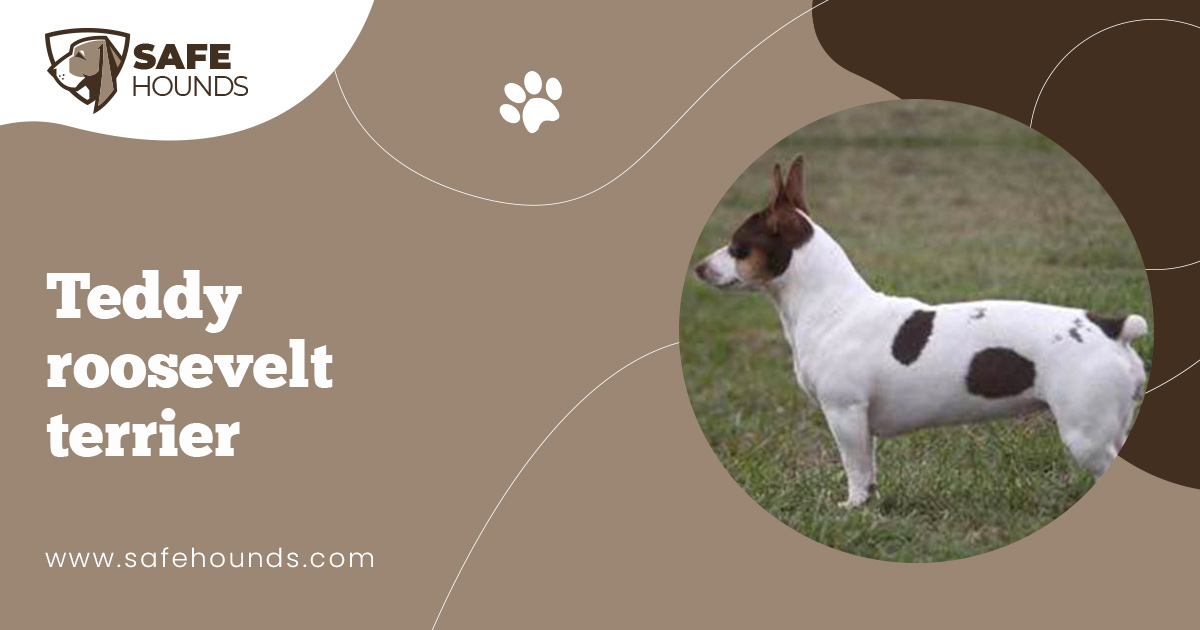 The plush teddy bear is not the only teddy associated with US President Theodore Roosevelt. A rare breed of terrier also bears the great mans name the Teddy Roosevelt Terrier, named so in honor of the president. The Teddy Roosevelt Terrier is an ultimate ratter. This low set dog that is roughly 15 inches in height is sturdy dog with a well boned and muscular body. The working terrier has descended from the terriers brought to America by English miners and by other English immigrants. The exact ancestry of this breed is unknown but it is highly possible that it has resulted from the crossing of Smooth Fox Terrier, Beagle, Whippet, Manchester Terrier and other breeds of ratters. From these crossing, two types of ratters evolved – a lean long legged terrier and a muscular short legged one. President Roosevelt is said to have owned the short legged variety. This terrier was named Teddy Roosevelt Terrier after the dog had rid the White House of its rat denizens. Needless to say, the breed gained enormous popularity because of this feat. Everyone wants to own the breed of dog highly valued by the president of United States especially because the dog is noted for its good looks and great temperament.

A Teddy Roosevelt Terrier is not only a very useful working breed. The dog makes an excellent companion because of its comical and entertaining personality. This breed is considered to be a mighty mite, a big dog in a small package because of its lively, bold and very curious nature. The dog was not nicknamed Feist (for feisty) for nothing. The constantly wagging tail shows the friendly personality and the seemingly inexhaustible energy of the dog. A Teddy Roosevelt Terrier makes a wonderful companion BUT the dog is not for everyone. This dog loves the companionship of its family thus it would not be a good choice for a part time dog owner. The Teddy Roosevelt Terrier is the Dennis the Menace in the dog world endearing and lovable but can be a nuisance. This is one of the reasons why the dog is often abandoned or left in rescue centers. This breed needs supervision as left to its own devices it would be a formidable one-dog demolition team. This terrier has an unaccountable propensity to gnaw and to dig. The dog can rearrange the landscaping in no time and could make small work of destroying prized plants.

This breed though is easy to train as apart from a high level of intelligence, the dog would always want to please its people. Teddy Roosevelt Terriers has excelled in conformation shows and agility trials.

The Teddy Roosevelt Terrier is a low set small to medium hunting terrier. This sturdy dog has a muscular body and stands from 8 to 15 inches. The blunt wedge shaped head is broad but proportionate to the size of the body. The broad and slightly domed skull slightly tapers towards the muzzle. The muzzle is well chiseled, well filled out under the eyes and slightly tapers from the stop to the black nose. Cheeks are well muscled. Powerful jaws are well hinged back letting the dog to open the mouth widely when catching rats and other rodents. Complete set of evenly spaced and good sized white teeth meet in a scissor or level bite. The eyes are small but rather prominent. Round or almond shaped the obliquely set eyes range from dark brown to amber in color. Set on at the outside edges of the skull, the V shaped ears are either erect, button or tipped.

This ratter has a clean moderately long neck. Slightly arched, it blends smoothly into the firm and smoothly muscled shoulders. This breed has well proportioned longer than tall body. The backline is level. The muscular though rather short loin is slightly arched and has a moderate tuck up. The dog has a slightly sloping croup, well sprung ribs and a brisket that extends to or even below the level of the elbows. Forequarters and hindquarters are well boned and smoothly muscled. Compact feet are slightly oval in shape. Set on at the end of the croup, the thick based tail tapers towards the tip. The tail can be docked or left in its natural state. Docking though is commonly preferred to prevent the constantly wagging tail from being torn and injured when the dog runs through shrubs and briars. This breed has a short dense coat that is either smooth or hard to the touch. The shiny coat can be a solid white, bicolored (a combination of white, blue, lemon, orange, chocolate, red, black and tan) or tricolored (white with markings of tan and black).

The Teddy Roosevelt Terrier is a versatile breed. The dog is a ratter and an outstanding hunter. It excels in agility and obedience trials. The dog also makes a wonderful addition to the family. Teddies are loyal, loving and intelligent. The dog has a comic and entertaining personality. Forever a clown, the dogs antics will make the family laugh all day. Because of its intelligence and its willingness to please, the dog responds well to training. The dog form a strong bond with its family but it is known to choose a favorite person. This spunky and energetic breed makes good playmates of the children. The dog tolerates other dogs and smaller pets especially if they have grown together. This spunky breed is always on the go. A Teddy Roosevelt Terrier is certainly not a couch potato but the dog can switch off its limitless energies if it would mean that it can get a cuddle from the master. Because of the size, the dog would do well in an apartment as long as it is regularly provided with opportunities to exercise.

The Teddy Roosevelt Terrier is a low maintenance breed. Occasional brushing with a firm bristled brush would be enough to remove dead hair and bring out the coats natural sheen. Frequent bathing is not necessary. Once every six months would ensure that the natural oils of the coat will not be stripped off as doing so can result to skin problems. Because of the short coat the dog would benefit from a sweater during the chilly months especially when the dog is out for a walk. This rat terrier is a highly energetic breed. The dog must be provided with opportunities to let off steam and with mental stimulation otherwise it would develop destructive habits.

In the 1800s, immigrants from the British Isles have brought with them feisty little dogs. These dogs were referred to as the dogs of the common man as they were mostly owned by English miners and by people from the working class. These dogs are excellent ratters. Rats and other vermin are most hated pests people have to contend with during those times. As there were no rat poisons back then, the ratting dogs were highly appreciated for reducing rat population. The dogs exterminate rats from houses, from barns, ports and warehouses. The dogs are highly valued by miners as they eradicate rats from mines shafts and from their living quarters. It has become a form of recreation for the miners to bet on the dog that can kill the most rats. These dogs that were commonly called Feists because of their feisty personality were hunted and used in dog fighting.

These rat terriers were eventually crossed with Smooth Fox Terrier, Manchester Terrier and the now extinct English Terrier. The Whippet and Greyhound were later introduced for greater speed and stamina. Beagle genes were added to sharpen the hunting skill. The crossing has resulted to the development of two types of terriers made distinct from each other by the length of the leg. Type A has a leaner build and longer legs. Type B is muscular and short legged. These dogs were first and foremost ratters but after the speed, stamina and hunting abilities were improved, the dogs were honed to fill the needs of dog owners. Dogs in the eastern forests have evolved into outstanding game dogs that worry squirrel, rabbits and other small game. In other parts of the country, the dogs were bred to be all around farm dogs that are highly valued by farmers and ranchers. The dog can do a little herding, would go to ground to hunt badgers and squirrels and would amuse the family with its comic personality.