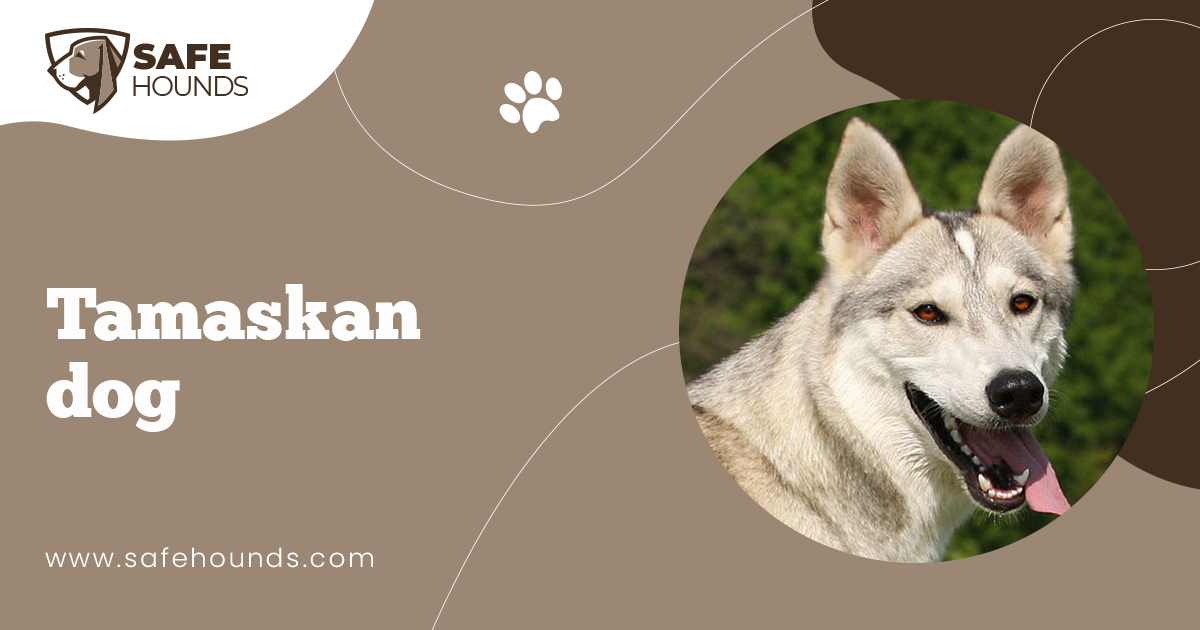 Wolves have always fascinated people. These feral animals are endowed with beauty and immense strength. Similar to humans, they are social and have the capability to live and work together in a pack. These animals in the wilderness would normally induce hysterical fear. However, it can never be denied that the canis lupus that have popped in our myths and legends have captivated people with their eerie howling. This is probably the reason why breeders would try to create a wolf look alike time and time again.

The Tamaskan Dog, a breed of dog that originated from Finland has the looks of a wolf but certified to have no wolf content. A Tamaskan, also known as Finnish Tamaskan Dog has the typical appearance of a wolf. The dog has a thick coarse fur, bushy tail, small ears and almond shaped eyes. The dog has the characteristic wolf mask. A Tamaskan also howls beautifully like a wolf. This is a large dog only a bit smaller than a GSD. Because it has the lupine appearance of a wolf, the dog should look intimidating. Tamaskan in a North American Indian language means strong and mighty wolf. The dog is indeed strong but unlike a wolf, a Tamaskan has a well balanced temperament. Never expect your Tamaskan to be a guard dog because it does not have an aggressive temperament. This dog is actually very friendly. This temperament makes the breed an ideal home companion.

The Tamaskan Dog originated from Finland but it was generally accepted that the original breeding stock has evolved in England and America. In the early 1980s, Husky type dogs were bred with Alaskan Malamutes, German Shepherd Dogs and Siberian Husky to create a wolf look-alike breed that would excel in sled pulling races. Tamaskan is a working breed. This domestic dog has excelled in obedience and working trials. The breed also has the sled pulling ability of its Alaskan Malamute and Siberian Husky ancestors. Similar to a wolf, the Tamaskan is also a pack oriented breed. This is an intelligent breed but training can be a challenge given that the dog is somewhat stubborn. Tamaskan popularity as a home companion is growing. Treated with love and respect, the Tamaskan will reward its human family with lifelong devotion and loyalty.

A wolf dog without wolf content is an apt description for the Tamaskan dog as this working breed has the typical appearance of a wolf but not the feared and intimidating temperament of a wolf. A Tamaskan is a large breed. Fully mature male dogs weigh from 70 to 110 pounds. Adult females tip the scale at 55 to 90 pounds. This breed has a strong and muscular rectangular shaped body. The length of body measured from the shoulder to the rear point of the pelvis is longer than the height measured from the top of the withers to the ground. The strong neck is long and slightly arched. The level topline slopes slightly to the croup. The muscular withers are well pronounce, the back firm and straight. A Tamaskan has a short but well muscled loins and a tucked up taut belly. Straight front legs, powerful and parallel hind legs and strong feet with long arched toes enable the dog to have a light and flowing but powerful ground covering movement. Tail that reaches the hock joint is covered with thick coarse hair. Tail is carried downward when the dog is at rest. In motion, the tail is carried higher but not curled over the back.

A Tamaskans wedge shaped head has a slightly arched forehead and moderate stop. The long muzzle has a straight nasal bridge. Clean cheeks are well muscled, strong jaws are symmetrical. Well developed teeth meet in a scissor bite. This wolf look alike has a black pigmented nose. Medium sized almond shaped eyes are yellow, amber or brown in color. The triangular ears with rounded tips are medium in size but appear to be small in proportion to the head. Ears that are set wide apart high on the skull are very erect and carried facing forward. A Tamaskans tight skin is covered with straight close coat. The slight ruff on the neck and around the shoulders frames the head and enhances the impressive appearance of the dog. In winter, the dog grows a lush undercoat that covers the entire body as well as the inner part of the ears. Coat colors vary from wolf grey, black grey or red grey with a black overlay. This breed has the typical wolf mask.

The Tamaskan Dog has all the ideal qualities of a good family companion. This is a loyal, devoted and affectionate pet. This dog forms a strong bond with the family but noted to be exceptionally sweet and tolerant of the children. This intelligent breed has the eagerness to please but the dog is somewhat stubborn and gets bored easily. Training incorporated in play sessions and positive reinforcement would be a more effective way of gaining the attention of the pet. This breed needs human companionship. A Tamaskan suffers from separation anxiety when left alone for quite a while. Keeping another dog would be a good idea. This breed is friendly not only with other dogs but with smaller pets as well given that it a Tamaskan is noted to have a low hunting instinct. The breed does not have an aggressive temperament. The dog would make a useless guard dog as it would welcome intruders with sloppy kisses and a wagging tail. Because of its arctic origin, the dog would prefer a cooler environment. The dog is not suited for apartment living as it would need a large yard where it can release its pent up energies.

Owners of this breed would have very minimal grooming responsibilities. Grooming the dog once a week will be sufficient to maintain the good condition of the coat. During shedding season the dog would need to be groomed more frequently. Bathing should be done only when very necessary so as not to strip the natural oils that moisturize the coat. An owner of this breed can get away with occasional grooming but the dog has to be taken on long walks every day. Remember, this is a working dog a sled puller. A Tamaskan that is solely kept as a home companion would have to be provided with opportunities to exercise.

The Tamaskan Dog is not really an ancient breed but its origin, similar to other breeds is the subject of controversies. However, this breed that was primarily developed to work and to race in arctic conditions was generally accepted to have originated from Finland. Foundation stocks for this breed have evolved in other countries. These dogs were purchased and imported from England and the United States in early 1980s. Different types of Arctic breeds were chosen to be the foundation stock for a breeding program that has the objective of creating a breed with a wolf-like appearance but one that has the sought for temperament of an ideal family dog. As there were no records of the breeding program it was not ascertained how the Tamaskan Dog was developed. It was believed that five husky dog types of unknown origin were imported into UK and bred to Siberian Husky, Alaskan Malamute and German Shepherd Dogs. The resulting dog type was given the name wolf dog. Sometime in 1988 the name was changed to Northern Inuit as the wolf dog name is rather misleading given that the breed has no wolf content.

A Northern Inuit Society was organized but because of differences in opinions on how the breeding program will continue, the organization was dissolved and two new societies were formed. One society decided to adapt the Utonagan breed name. Dogs developed by this organization are distinct from the Northern Inuit. However the desired wolf-like appearance was not achieved. Differences in opinion have yet again caused another split. This has resulted to the formation of the British and International Utonagan Society. This organization has continued the programmed selective breeding. The society was again dissolved causing other members to adapt a new breeding program. The former Northern Inuit, the Utunagan Dog and some dogs obtained from Finland became the foundation stock of the new breed. The first generation Tamaskan dog was developed by Lynn Hardey and Jennifer Peacock in the Blustag and Blufawn kennels. Born in 2002, these dogs were the first Tamaskan to be registered. The Tamaskan Dog Registry was formed in February 2006. On the same year addition of new bloodlines was also closed. The Tamaskan Dog Society of Great Britain was formed in 2006. The breed has reached American soil in 2005. A year later, the National Tamaskan Club of America was organized. In 2009 Euro Tamaskan was formed. The Tamaskan Dog was bred and developed in Great Britain and in United States but Finland was considered as the breeds country of origin.