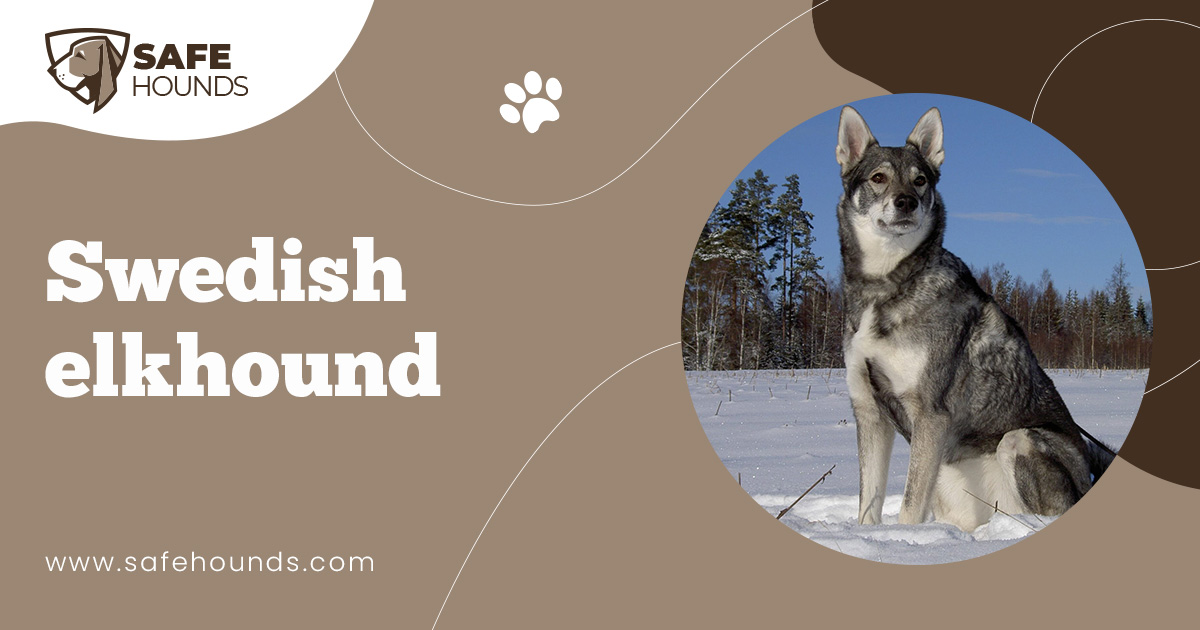 Whenever hunters and dog lovers talk about elkhounds the Norwegian Elkhounds would most certainly come to mind. There is however another type of elkhound – the Swedish Elkhound. As the name suggests, the breed originated from Sweden. This breed has existed for centuries not only in Swedens northern regions but also in Norway, Denmark, and Finland and in other Scandinavian regions. From the early times these dogs have adapted to the heavily forested areas of Sweden and Norway. These dogs have to be agile to easily clear the underbrush and fallen trees and to effortlessly traverse deep snow while pursuing a prey. These dogs were selectively developed to be taller and larger and to have a strong constitution needed to be an excellent working dog. A Swedish Elkhound is a robust nimble footed dog that is equally adept to scale rocky ledges and pursue the prey under the cover of thick vegetation. This tenacious breed would keep the moose at bay until the hunter arrives for the kill.

The Swedish Elkhound is an athletic looking dog with an impressive double coat that usually comes in two colors. This Spitz type hunting dog is most commonly found in Northern Europe. This working dog is used to herd, to guard and to hunt. In addition to having a calm and stable personality the dog is loyal and obedient. This endears the dog to the people in its country of origin. The Swedish Elkhound was made the National dog of Sweden. This dog that is acclaimed for its courage was immobilized during the war years to pull sleds. Because of this, the Swedish Elkhound was given the honor of being the National Dog of the Swedish Marines as well as the official service canine of the Swedish Air Force.

Books about this breed often show the dog hunting moose in Sweden although the name of the dog also means bear dog in the local dialect as these dogs are excellent hunters of bears. This dog that has a wolf like appearance is considered to be the most powerful and the largest among the elkhound types of dogs in Scandinavia. The dense double coats allow the dog to tolerate the frigid temperature of northern Europe.

The Swedish Elkhound is a spitz type hunting dog with a rectangular body and an impressive thick double coat. This breed has a clean cut head and a slightly arched skull. The nasal bridge is broad and straight. The muzzle tapers towards the tip of the wide nose. Tight fitting lips enclose complete evenly spaced teeth that meet in a scissor bite. Brown, slightly oval shaped eyes have an intense though calm expression. High set ears with pointed tips are perfectly erect. This dog has a powerful slightly longer that tall body, a straight topline that slightly slopes from the shoulders to the broad croup. The broad loin is well developed. Chest has a good depth and the ribs are well sprung. The tail is a distinct physical feature of this breed. Medium in length with an even thickness, the densely coated tail is tightly curled scimitar fashion. The legs are long and thick boned. These dogs have hare like feet with tightly knit toes.

The Swedish Elkhound has a double coat – a longish hard top coat and a woolly soft under coat. Coat on the head and front of the legs is smooth. Coat is longer on the neck, chest, thighs, and backside of the legs as well as on the tail. Coat colors are usually light and dark gray. Cream or light grey colored markings on the sides of the muzzle, on the cheeks and on the throat enhances the appearance of the dog. These dogs may have the same colored markings on the chest, belly and on the underside of the tail.

The Swedish Elkhound is an intelligent and brave breed of hunting dog. It will not be chosen to be the national dog of the Swedish Marines if it is not. This dog will display a bold behavior while hunting but it is also known for its stoic demeanor. A Swedish Elkhound has a calm disposition. This breed forms a strong attachment to the people that cares for them. A Jämthund adores its family, loves and tolerates the children. These are probably the reasons why this breed makes wonderful family dogs. As with any other breeds of dogs, socialization and obedience training is imperative. This breed is known to manifest a dominant behavior towards other dogs and smaller pets.

A Swedish Elkhound are active dogs, they would need large spaces to burn their excess energies. For this reason, an apartment or a home in the city would not be a suitable living arrangement for this breed. With the dense weather resistant coat, the dog is well equipped to withstand extreme weather conditions. These dogs would appreciate to be allowed to roam vast open spaces in the rural area.

The coat of this breed would need extensive grooming. The longish coat would need to be thoroughly brushed everyday to remove mats and tangles. These are hunting dogs and as such they need to be carefully cleaned and checked for burrs, thorns and foreign bodies on the ears and eyes after the dog has been hunting. The dog should be bathed only when necessary so as not to remove the weather proofing of the coat.

The Swedish Elkhound is a breed of hunting dog with ancient origin. This breed was raised by the people in Jamtland, a historical province in Sweden. This outstanding dog is claimed to originate from Sweden but no credit can actually be given to the people of Sweden for raring this breed given that Jamtland has only become a territory of Sweden in 1645. Nevertheless, this breed is highly regarded by the Swedes. The dog was in fact made the countrys National Dog and the National Dog of the Swedish Marines. The Swedish Elkhound was also made the Swedish Air Forces official service canine.

This breed is believed to have originated in 1000s. Ancestors of this breed may have been the companions of the Stone Age people. This breed was speculated to have been developed by the locals who populated the northern part of Sweden at the last Ice Age. This breed was the result of the selective breeding of aboriginal dogs that have similar appearance to the present day West Siberian Laika. Genetic studies made on the breed have noted that the Swedish Elkhound is very similar to the Norwegian Elkhound. The only disparity is the size as a Jämthund has an average weigh of 66 pounds while the Norwegian Elkhounds weight is from 45 to 60 pounds. Both hunting dogs are deemed to be of the same breed. This is probably the reason why in spite of the fact that the Swedish Elkhound had existed for centuries it was only recognized as a distinct breed in 1946.

Forebears of the Swedish Elkhound and the other northern breeds are spitz type dogs with thick double coats, pricked ears and tails that curled in the form of a scimitar. These dogs that are believed to have originated from Denmark are called Swamp Dogs or Torvemosehunden. These Swamp dogs migrated to Scandinavia. These canines are highly valued for their hunting prowess. Over the years, these dogs were able to adapt to the rugged environment and the harsh weather conditions of the Scandinavian Peninsula. The dogs have become the constant companions of the Vikings. This fact was evidenced by the bones of similar dogs found in Viking graves. In Scandinavia a dog is believed to guide the deceased in the underworld, a reason why the dog are often buried with their masters. These Swamp dogs evolved into outstanding hunters of big game. They were now given a new name – Dyrehund which means large game dogs. For centuries the Dyrehund have hunted boar, elk moose, wolves and other large game birds. These are ferocious dogs that can be depended upon to guard and protect the homestead from raiders. Because of the dogs outstanding qualities they were extensively used for breeding to propagate the breed.

During the later part of the 17th century, thousands of Finns were forced to migrate to Sweden and Norway because of the severe famine caused by an early winter. The dogs were brought along to hunt big birds to supplement the food supply of the people. Over the years different but related breeds were developed in the different regions of Scandinavia. Among these breeds are the Bear Dog, the Finnish Spitz, the Karelian Bear Dog, the Norwegian Elkhound and the Swedish Elkhound. The Jämthund a taller and lankier breed was developed in the dense forest of Sweden. These northern breeds were originally shown in dog shows as one breed. Later on these dogs were recognized as distinct breeds. The Swedish Elkhound was separated from the Norwegian Elkhound in 1937 and was recognized as a distinct breed in 1946.