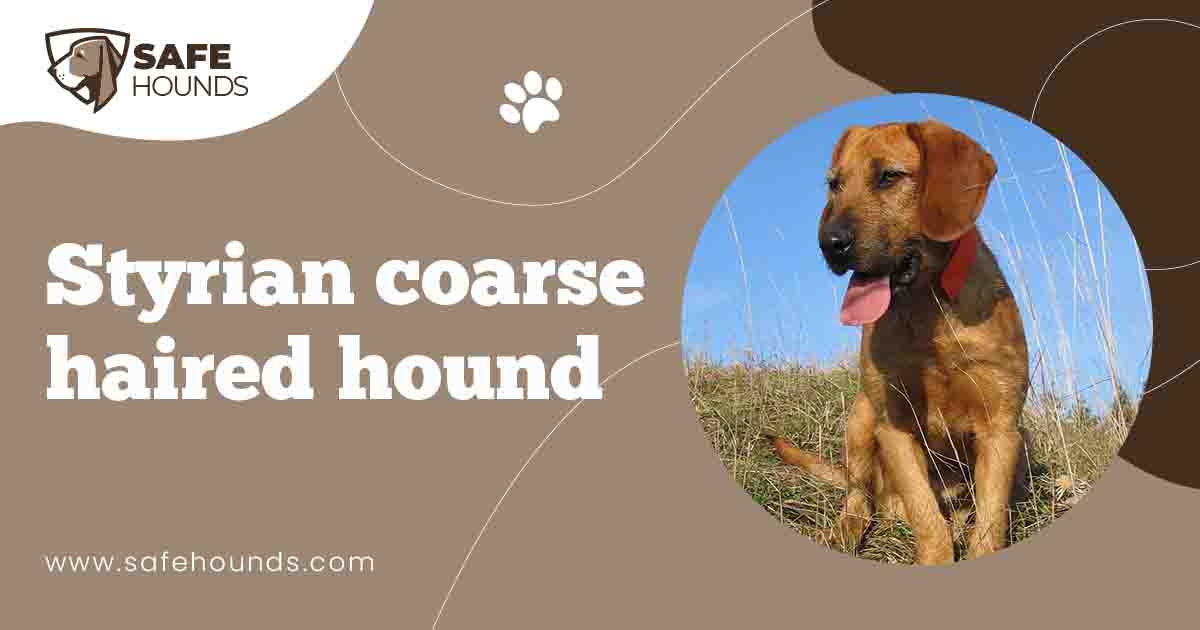 The Styrian Coarsehaired Hound is one of the three breeds of dogs known as Grand Brackes. Named so because these dogs were primarily developed to hunt in the mountainous areas of Austria that is also noted for its unforgiving climate. This breed is seldom seen in other parts of the world. Known as Styrian Coarse Haired Hound in Austria, this breed is exclusively utilized in hunting and in tracking wounded game. Developed from a Hanoverian Scenthound and from an Istrian Hound this dog is noted for its remarkable scenting ability and has the most desired rough coat that makes the dog resistant to the harsh weather in high altitudes of the Austrian Mountains.

This breed of hound that was developed in Styria is energetic and extremely agile. With its muscular and lithe body, the dog can easily traverse the most difficult terrain. This is a passionate and tenacious hunter. Once a scent is found the dog will never give up the quarry even if it means having to endure thirst, hunger cold, heat and other discomforts. This intelligent hunter will be silent while trailing but when it is pursuing a hot scent, the dog is noted to be very vocal. The Styrian Coarsehaired hound is a competent hunter. Rabbits, hares and other small game are the usual quarry of this hound although they are also known to hunt wild boar and other big game. Because of its excellent scenting ability, the dog is also utilized to find wounded game.

The Styrian Coarsehaired Hound is a rare breed. In Austrian and in its neighboring countries, most of these dogs are mainly kept by hunters. This hardworking and passionate hunter may have a forbidding serious expression but the dog actually have a loyal and affectionate nature. Highly valued as a hunter, the Styrian Coarse Haired Hound is also a well loved family companion.

The Styrian Coarse Haired Hound is a breed of hound that is highly valued by hunters in Austria. This is a medium sized breed, a male dog measures 18 to 20 inches and a females height is from 17 to 19 inches. Average weight is 40 lbs. This dog though is strong and hardy. With its elastic ground covering movements, its strongly muscled body and its muscular and well angulated limbs, the dog can easily trail its quarry even on the difficult mountainous terrain of its country of origin. The Styrian Coarsehaired Hound has a slightly rounded skull and a strong straight muzzle. This breed has a black nose. Eyes have brown irises. The dog has a serious expression but it does not have a vicious temperament. Complete set of teeth has a strong scissor bite. Ears that are covered with fine hair are not too large and lie flat. The neck is not too long but it is strong.

This breed has a straight broad back. The loin is moderately tucked up and the croup falls away obliquely. Chest is deep and broad. Medium length tail is strong at the root and well covered with hair that forms a brush with no plume on the underside. The tail is carried upwards forming a slight sickle. Tail is never curled. The rough coat of a Steirische Rauhaarbracke is not shaggy. The harsh and coarse coat has no gloss. The hair on the head is shorter than the hair on the body still a moustache is formed. The medium length wiry coat may come in varied shades of fawn and red. Some specimens may have white markings. A white blaze or a full necklace enhances the color of the coat. The chest, the legs, the feet and the tip of the tail may have white markings as well.

The Styrian Coarsehaired Hound is wary of strangers. This breed is generally good with older children and tolerates other dogs especially if they were raised in the same household. This dog is known to manifest a dominant behavior. Because of a high prey drive, this breed is not safe with other smaller pets as it has the tendency to chase small animals. Socialization and obedience training is very necessary. However, because of its typical hound stubbornness and independent nature, the Styrian Coarse Haired Hound can be quite difficult to train. This breed though forms a strong bond with the hunter in the family. As such, this affectionate dog will show the master its eagerness to please. Consistent training conducted by the person considered as the master of the dog will turn the dog into a wonderful home companion with a well balanced temperament. A well socialized and well trained dog will show gentleness and tolerance to the children.

It must be remembered that this breed is first and foremost a hunter and as such it would have high exercise requirements. These dogs are usually kept by Austrian hunters but because the dog bonds well with the master and noted to be affectionate some are kept as house companions. This breed would thrive in a home with a large yard. The rough coat is resistant to harsh weather and allows the dog to stay outdoors. Housebound dogs must be given regular opportunities to exercise. A Styrian Coarsehaired Hound that is not sufficiently exercised or one that does not have a task to do turns into a hard to handle and destructive dog.

Coarse haired dogs that are shown would need a more extensive grooming routine. The Steirischer Rauhhaarbracke is coarse haired but this dog is valued for its hunting abilities rather than for its appearance. Brushing the coat of this dog once a week would be enough to maintain its good condition. The medium length hair though would pick up burrs and dirt when the dog is hunting. It is necessary to thoroughly brush the coat after the dog is hunted not only to remove dirt but also to watch out for any external parasites that may have been picked up by the dog. Likewise, the hanging ears would need to be regularly checked and cleaned.

The Phoenician traders frequenting the Mediterranean trade routes have maintained a flourishing business and have gained a foothold in the Mediterranean trade during the ancient times. These great traders were famous for their luxury goods. Moreover, these ancient people have played a major role in the development of European breeds of dogs. Middle Eastern hounds were carried by these traders in their ships and traded with the Celtic tribes. These hounds became the foundation of most European breeds. These dogs became the basis for the Austrian Hounds. One of these breeds that originated from the Phoenician hounds is the Styrian Rough Haired Mountain Hound.

Styrian Coarse Haired Hound, Hochgebirgsbracke, Peintinger Bracke all refers to the Styrian Rough Haired Mountain Hound a breed that dates back to the 18th century and originated from Austria. Austrias mountainous land is a game rich hunting ground but it also has extreme climatic conditions. A hunting dog has to be able to endure the unforgiving climate. A dog breed with a type of harsh coat that will endure these harsh conditions is needed. But attempts to create such breed failed until a breeding program was started by Karl Peintingen. Syria, a state southeast of Austria has rough coated hounds, a cross of wirehaired hounds of Istria and schweisshund type dogs. These dogs were used as the foundation for the development of a breed that will be used to hunt in higher elevations. In 1870, Karl Peintingen has started the development of a new breed by crossing an Istrian Hound with Hela 1, his Hanoverian bitch. After the third generation of breeding, a stable new breed was created. The breed was known as Styrian Coarsehaired Hound, a name that was taken from the place where the breed was created. The new breed is at times referred to as Peintingen Hound in honor of its developer. In 1889, less than 20 years after the breed was developed, the Styrian Coarse Haired Hound was officially recognized.

Austria has three known breeds of hunting dogs that are not only noted for their hunting prowess but also highly valued for their ability to hunt in high altitudes and in rough terrain. These breeds that are known as the Grand Brackes are the Tyrolean Hound, the Austrian Black and Tan Hound and the Styrian Coarsehaired Hound. The Styrian Coarsehaired Hound is a very rare breed that is rarely seen outside Austria. This passionate hunter has an excellent sense of smell and has the capability to weather extremely hot or cold climates. The dog will forego eating, drinking and endure any discomfort when it is trailing its prey. Foxes and hare are the quarry of this breed. Because of its excellent scenting ability, the dog is also used to trail wounded game. This breed is highly prized by Austrian and Yugoslavian hunters.