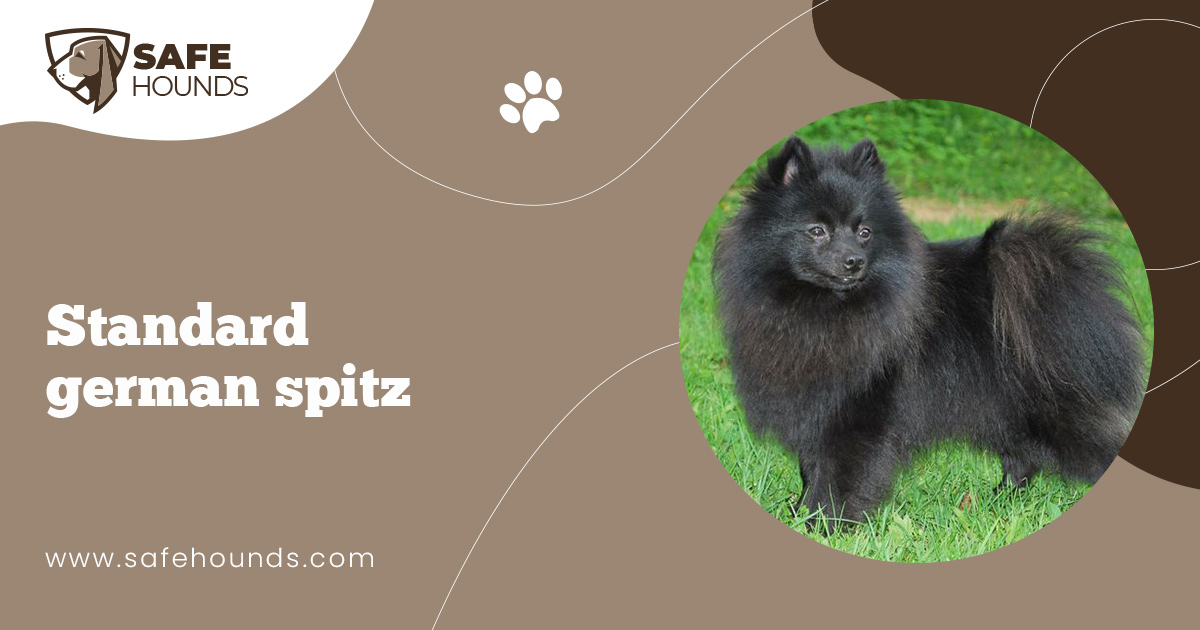 The Standard German Spitz dog was bred mainly to be a companion dog, unlike many other dog breeds. Even though that is the case, it was found over time that they also make decent watchdogs.

The Standard German Spitz is an energetic dog that is also very intelligent. These dogs are known to bark at even the smallest of disturbances if they are not trained to do otherwise. These dogs definitely like to bark! Because of their small size, it is not recommended that these dogs live around children. If a child or other heavy object were to fall on this breed of dog, it could cause the dog major problems. If the German Spitz is given the proper training and they are socialized, it is possible they will do okay around well behaved children who are gentle. The Standard German Spitz are tolerant toward other animals and even strangers under certain circumstances. The key to making this happen is to socialize and train them properly. An inexperienced trainer may have a hard time training the Standard German Spitz. Training them to do things will definitely be a challenge. In order to get adequate results, the trainer must train them to actually want to do things. It will take proper technique and a good amount of patience to train this breed. A determined trainer can do it. If you are interested in a dog that is going to listen to your every word and obey you, then the Standard German Spitz would not be your first choice.

The life expectancy of the S

tandard German Spitz is between 13 – 15 years. They are recognized by the CKC and the FCI.

Training at an early age is important for this breed. They should be taught that it is okay to bark a few times when strangers arrive or someone rings the doorbell. After that, they should be trained to keep quiet. If the proper training is not given at an early enough age, they may become very demanding. This breed is not recommended for children of a very young age. If the Standard German Spitz receives too much attention from children, this can cause them to become nervous. When they become nervous, they tend to snap at their surroundings if they feel threatened. This breed can get along with older, more behaved children. Elderly people have found this breed to be a good companion.

The Standard German Spitz needs a regular maintenance routine of regular brushing. This is necessary to prevent its coat from matting. Quite a few of these dogs do not enjoy being groomed. They need to be trained to sit still during the grooming process.

The Standard German Spitz will do quite well living in an apartment. They are active enough indoors to get the exercise they need. They will do even better if they have a fenced in back yard. It is important to take this breed of dog on a daily walk or jog.

The Standard German Spitz is the middle sized variety of the German Spitz that was imported to the United States and Canada over a century ago. All varieties of German Spitz share the same traits, they only differ in size and in coat colors.

The German Spitz is considered to be the oldest breed of dog in Central Europe. It was believed that the Viking plunderers brought profusely coated dogs in Europe. These dogs became the progenitors of the German Spitz. This breed has a long history that dates back some 6000 years. Dogs of similar appearance were depicted in 500BC Greek vases. Documentations of the breeds existence were found during the Eurasian times.

The Turfspitz (canis familiaris palustris) is believed to be the immediate forebear of the German Spitz. These dogs are called the dog of the lake settlement and the peat bog dog as they inhabit the swampy areas in the northern German plains. People living in these areas had to build their houses on stilts. These swampy areas have turned into peat bogs from where the remarkably preserved remains of people and dogs where excavated.

The existence of this breed is well documented. Ancient Greek, Egyptian and Roman artifacts have depicted the breed, documentations about the breed appeared in 1400 – 1600s Greek and roman texts. During this time writers refer to the dog as an excellent defender and home companion. White Spitz was also depicted in several paintings of illustrious painters.

The White Spitz was an all around farm dog that was used in herding, sled pulling, watch dog and companions. These dogs have performed varied roles depending on the needs of the master. Wagons were used to transport people and goods during those times and these dogs can be seen accompanying coachmen. White coated dogs were preferred during those times as people were able to distinguish their pets from prowling wolves that hunted for food in the villages.

German Spitz and many other breeds are believed to have descended from the White Spitz. German Spitz of different sizes and colors has evolved. The people in Pomerania had white coated Spitz while Wurttemberg citizens have developed black and brown dogs that are used in their farms. There are five types of German Spitz that are recognized by the FCI – the Wolfspitz, Grossspitz, Mittelspits, Kleinspits and the Swergspits. Wolfspitz is the largest and similar to the Keeshond of Holland. The Grossspitz or the Giant German Spitz has an average height of 16 inches and comes in solid colors of white, black and brown. The Mittlespestz is the medium sized dog that has white, brown or black coats. Kleinspets has an average height of 12 inches and the color ranges from white, black, brown and orange. The Swergspetz are otherwise known as the Pomeranian.

The Grossspitsz and the Kleinspitz are more favored as home companions. The Mittlespitz on the other hand became farm dogs that perform a variety of roles. The Mittlespitz was brought to America by German immigrants but because of the anti-German prejudice brought about by World War 1, the name of the breed was changed to American Eskimo Dog. In 1913 the breed was recognized by the UKC.