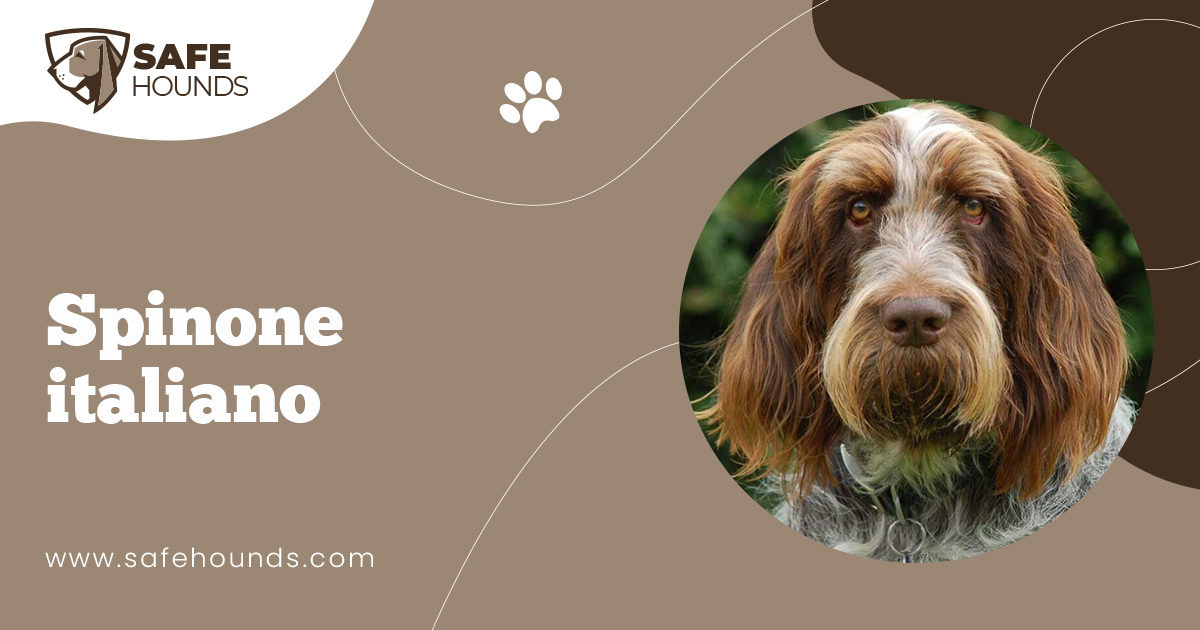 The Spinone Italiano has also been known as the Italian Pointer or the Italian Griffon at one point in time.

If your looking for a excellent hunting dog then this is the breed for you. But you will pay a price for them. They have been running $1000 and up. They are a rare breed going back as far as 500 BC and can be very hard to find. They are a loyal and friendly breed to own and you will not be sorry.

Besides being a great hunting dog they have also been used for companion dogs and are starting to be trained for the disabled. The will hunt in any weather and conditions. The Spinone Italiano are known to dive into freezing cold water without a second thought. He is a excellent swimmer and his coat protects him from the elements. This dog is a tireless hunter and he loves being in the outdoors. He is a decent watchdog, but not in terms of being a guard dog. Because of his fur and skin you do not need to worry about him getting into dense brush areas and cold swamps.The plus side too is this breed gets along with other dogs also.

You can also have your dog compete in sporting events and various other activities like back packing and flyball. He loves to do anything that is competitive and fun with lots of activity.

Your Spinone Italiano will be about 22 to 27 inches high and weigh around 60 to 85 pounds. The female will be a slight bit smaller.

They have a coat that is almost wiry and wavy. It is thick and about 4 to 5 centimeters long around the body while it is longer on the eyebrow, lips, and chin area as if forming a beard and mustache.

Their head is very distinctive with hanging ears that are never erect. They do not have the muscles in the ears to hold them up even if they wanted to. The eyes have a prominent eyebrow as does the lips. They have a beard and mustache, which gives them a comical expression.

Their jaws are very powerful. If they bite, they bite to keep. However, will let go on command. They are not stubborn and do listen when trained properly. Some hunting dogs will grab the prey and tease you with it. Well trained hunting dogs will go get it and bring it to you and holds it for you until you take it or drop it at your feet. The Spinone is one breed of dog that does not need much training.

The looks of the Spinone is one of distinction with a stance that is sure to get your attention as if they are trying to show off.

The Spinone Italiano is a very enthusiastic breed and always seems to be happy and easy going. If you treat him as a member of the family and not a pet, he will be very satisfied.

The two things you can expect from a Spinone Italiano are that when he is working his main objective is to do just that, work. Nevertheless, when he is not he will be a clown and loves to romp around with you and the family. He is very entertaining to watch with all his antics.

He will not be whiny unless he is locked up somewhere and totally ignored. He gets along with children whether he knows them or not. They must treat him with respect and he will give it back. He will also get along with other animals especially other dogs.

He will become a lap dog also because he wants to be close to you. Now, with his size and weight this may be a problem. You may just want to make him a bed right next to you. He is not a protective dog to the extent of guarding, but if he feels his family is being threatened he will attack.

Care must be taken in making his yard escape proof. He will be content in a fenced in yard, but you have to make sure he cannot jump out. Every now and again, you will get one that loves to dig. However, in most cases, Spinone Italianos are not diggers.

You may have to have him stripped several times a year, but no cutting to remove dead hair. Then just brush once a week. He has been known to groom himself like a cat as well.

If you love to jog, then your Spinone will be right beside you all the way. When they run, they move a bit slow and methodical than other hunting dogs.

The Spinone Italiano has a very long and impressive history. The origin of this dog is uncertain, but as with many of the ancient breeds, it is dated back to 500 BC. There were signs of a dog with strong bristly hair and resembles the Spinone Ialiano as far back as 100 AD. Then in 200 AD, there were signs of one that resembled a sheep only bristly rough fur. 300 AD gave us one that pointed and had long thick hair, but not very fast.

They have had a long service to man for hunting around Europe. No one is sure if they were brought forward for gun hunting or they just came from uncommon stock.

These are not a common dog breed in the United States and the standards are still not recognized as a standard in this country. By 1950, the breed was reconfigured by several great breeders. They are known for bringing forth the traits of sense of smell, setting, retrieving, recovering, and being close to the hunter.

Today he is still known as a famous hunting dog and has grown in popularity as a family companion. The breed is getting a following in the United States, just in the last decade now. Many breeders are telling of the great hunting abilities of this breed and it has brought about a curiosity in the breed from hunters. Once they see the Spinone Italiano in action, they are very impressed and wish to own one of their own.

As for a family pet, you will not find one more willing to please you then the Spinone Italiano. They live to please their owners. They will live to be 12 or more years so you can expect a long relationship with your family pet.