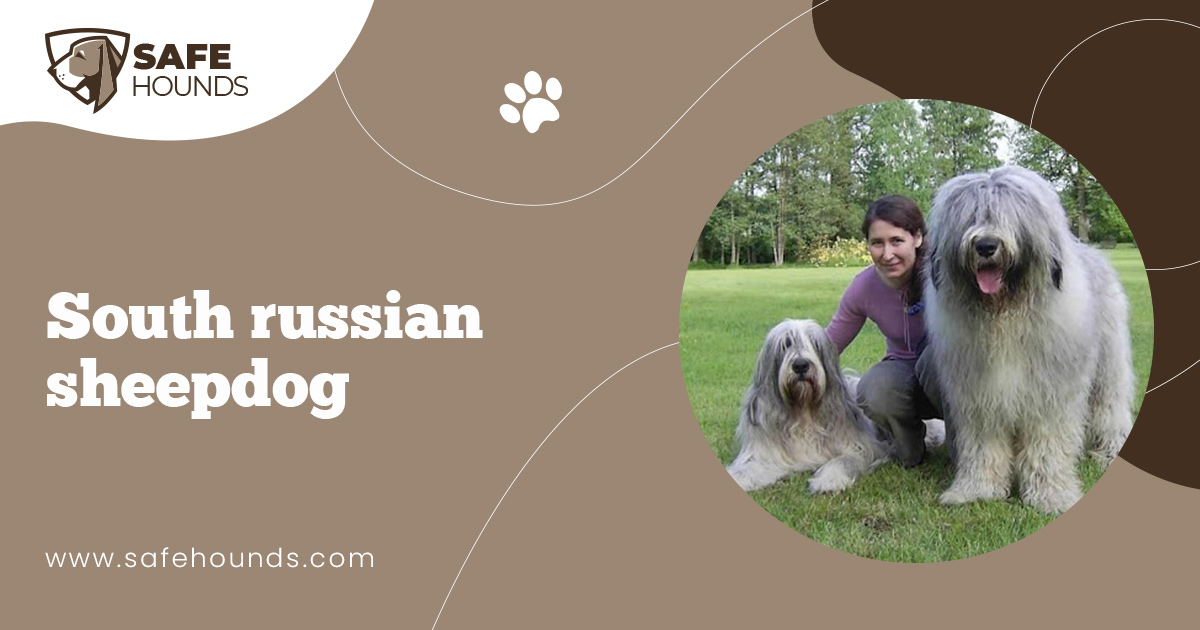 Ovtcharka (pronounced uhf-char-ka) is a Russian word which refers to a livestock guardian dog, a sheep dog or a shepherd dog. The South Russian Sheepdog or the South Russian Ovtcharka is a native Russian breed that was developed in the Russian steppe in the 1790s. These are bearded robust dogs with well developed musculature. An SRO is a large ferocious dog whose chief function is to guard and protect the flock from predators that include the wolves, the mountain lions and bears. The punishing jaws as well as the extreme strength enable this dog to protect its charges. More often than not, a South Russian Sheepdog is born with the flock and grew with the flock. The dog easily adapts to climatic and temperature changes and is well able to live with the flock. As such, the dog has developed a very protective behavior for the sheep it is guarding. An SRO is known to be a serious guard. The dog would ceaselessly patrol the perimeter, always alert, always ready to face anything that will cause danger to the flock.

There are many arguments about the origin of this breed. However, one thing is definite, a wolf is one of the ancestors of this breed. This is not only because the dogs skull appears to be similar to that of a wolfs but also because the dog has inherent behavior that is typical to a wolf. Apart from being ferocious, the dog is very independent, protective and suspicious. A South Russian Sheepdog living within the household will treat and protect the human family in much the same way it would protect and treat the flock. A South Russian Sheepdog is not a difficult breed but neither is it a family dog. The breed is not for everyone. SROs are not demanding dogs but they have a dominant nature. Males that are more massive and stronger normally show a more dominant personality than females. These dogs would react negatively to tense situations. Consequently, an owner has to show a strong leadership to be able to handle the dog effectively.

The South Russian Sheepdogs massive and well boned structure is covered with 4 to 6 inches dense coat that is quite harsh to the touch. The dense wooly coat has an unkempt look. Equal length of hair covers the head, the chest, legs and tail. At rest, the tail hangs down and reaches the hocks with the end slightly curving upwards. The long hair that covers the face forms a beard. Heavy fore lock will cover the eyes if left untrimmed. This breed has well developed undercoat. White is the most common coat color. Other coat colors are straw, white and yellow, ashen gray and other shades of gray. A white coat can have light gray markings or grey speckling. The dog has an elongated head and a slightly rounded forehead. This breed has a big black nose, big white teeth that fit closely. The hanging ears are relatively small and triangular in shape. Oval shaped dark eyes are set horizontally. This breeds lean neck is muscular and of moderate length. This is a robust breed. A South Russian Sheepdog has a straight and strong back, a short broad and rounded loin. The deep chest is reasonably broad and slightly flattened. The belly is moderately tucked up. The oval shaped feet are well arched and well covered with long hair. The muscular limbs and the athletic body provide the dog extra agility and speed. A South Russian Sheepdog has great power. They can run almost as fast as a wolf.

The South Russian Sheepdog has been accustomed to guarding and protecting the flock of sheep thus the dog has developed a domineering attitude towards anything or anyone that they think as their property. This property includes the sheep, other animals, the human family as well as the territory that they can scent fully. Because of the dominant nature, these dogs usually force their will upon other dogs. A rather weak owner will be dealt with in the same manner. For this reason, an owner should show strong leadership. The dog must be made aware who the boss is. The dog has to be taught from a young age that it is not the alpha male in the household. Otherwise the dog would be hard to control and discipline problems would arise. SROs are amazingly smart but training these dogs would not be easy. The dog has to see the reason for the command before it would obey. Training must be consistent as the dog has a short attention span. As mentioned, the SRO is not a family dog because of its dominant and aggressive nature. However, a well socialized and well trained dog would make a great pet. This dog will be friendly and tolerant of the children as long as they are made aware that the kids are members of the family. The dog would even be very protective of the children.

This breed should not be made an apartment dweller. An SRO requires a large area as it has extensive exercise requirements to stay in shape. Being a working breed, the SRO would need constant mental stimulation. A job will prevent the dog from being bored and from being a destructive tyrant.

A South Russian Sheepdog is an easy breed to care for. The dog has a long dense coat that protects it from extremely warm and cold temperature. Because this is a very active breed, the coat tends to matt easily. However, the coat practically cleans itself. A dog that has been working in the wet and muddy steppe would still have a striking white coat when dried. The coat would benefit from daily thorough brushing. Line brushing would make sure that the undercoat is thoroughly brushed. The area around the mouth should be cleaned daily.

The South Russian Sheepdog is otherwise known as Lonjuorousskaia Ovtcharka. This long haired white sheepdog has no precise origin. Some historians believed that this breed originated from the dogs of the pre-slavic arias that resided in the place where the South Russian Sheepdog originated 4 thousand years BC. These people use the original broudasti (prehistoric bearded dogs) as herd dogs. These dogs were described by L P Sabaneev as Russian Wolf killers or Russian Shepherds. When the arias moved to the west and to the north, these tribes were given the name Slavic and their dogs were called Russian Shepherds.

Another version of this breeds origin states that these dogs were developed from European herding dogs. This belief stemmed from the fact that the South Russian Shepherd has very similar hair type with the Austrian Shepherd. It was believed that these two breeds share the same ancestors. The Russian Imperial Law Books actually mentioned the importation of long wooly haired herding dogs in 1797. These dogs together with merino sheep were imported from Spain to Ukraine. These wolf looking hounds were utilized to herd sheep and to protect the flock from predators. However, the dogs proved to be too small for the sizeable territory of a Russian steppe. Moreover, because the herds of merino sheep have a natural instinct to stay together, a small herding dog would be redundant. Though there is a great need for a dog that will protect the herd from predators. Once again because of the small size, the dog proved to be inadequate to fight the Russian wolves. So the Austrian Shepherds were crossed with the tatar (Caucasian) shepherds, the Hungarian Komondor and the Crimean Greyhound which was common in Crimea during that time. The progeny of these cross breeding were large hardy dogs with aggressive temperament. These dogs became the ancestors of the South Russian Sheepdog. Most of the dogs that were imported from Spain were brought to Askania Nova. This large area in Crimea is considered to be the biggest sheep colony in Russia. The Falz-Fein family that owned Askania Nova continued to breed the South Russian Sheepdog. In 1850, about 2000 South Russian Sheepdogs exist in the area creating an approximate ratio of 5 dogs for every 1000 heads of sheep.

Breed population stated to decline when the steppe was reclaimed for agriculture. Dog numbers were further decreased when Askania Nova was destroyed and looted during the Russian revolution, the dogs were either stolen or destroyed. The Southern Russian Sheepdog is a loyal breed. A lot of dogs were shot for not accepting a new master. Fortunately, Prof V Brauner, a famous biologist came to Askania Nova in 1923. He found a few South Russian Shepherds. With the help of shepherds, breed enthusiasts and military kennels, more dogs were found. Reconstruction of the breed was started with the foundation of the state breeding center in Dzhankoi. The breed suffered another setback during the Second World War. Very few dogs survived. To revive the breed, the Komondor was once again crossed with the breed. Other dogs of similar type were added to the gene pool as well. Exportation of the dog was banned for many years. The Southern Russian Sheepdogs were mostly bred by military kennels to be aggressive guard dogs. The Southern Russian Sheepdog is no longer breed for aggression nowadays. New clubs were formed to popularize the breed in Russia.