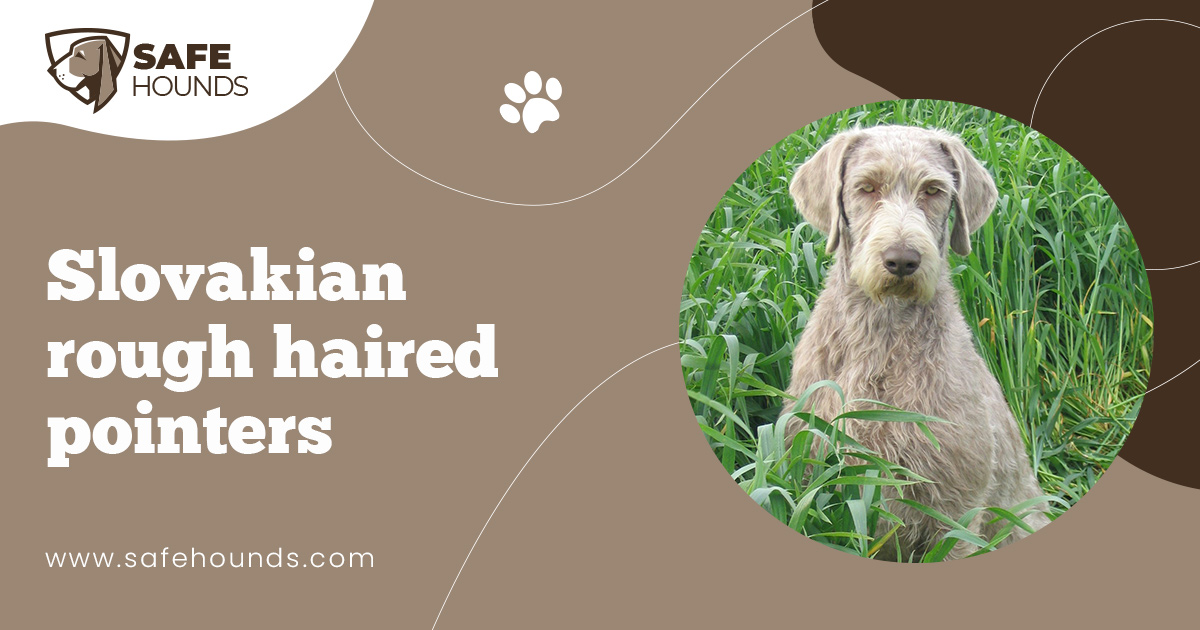 The Slovakian Rough Haired Pointer is an all purpose working breed of dog that was developed in the Czechoslovakia after the Second World War. This dog is believed to be the product of the amalgamation of the Weimaraner, the German Wirehaired Pointer and the Cesky Fousek. This recently developed hunting, pointing and retrieving dog is recognized in Slovakia as the Slovensky Hrubosrsky (Ohar) or Slovensky Ohar Hrubosrsty. However, outside its country of origin, the breed answers to a number of confusingly similar names. The SRHP is also known as Slovakian Wirehaired Pointing Griffon thus it is often confused with the Wire Haired Pointing Griffon. Both are distinct breeds and the Wire Haired Pointing Griffon can be distinguished by a smaller body and a slightly longer hair.

This versatile HPR dog is a real asset to any hunter. The dog is capable of working under difficult conditions be it on land or water. This natural tracker has a superb nose and an inherent determination to follow both air and ground scents. With its physical size, stamina and a good pace this dog can tirelessly cover large tracts of land. The thick coat protects the dog when it hunts in areas covered with heavy undergrowth. This breed is equally adept and happy retrieving in water. Steady at point, the dog is also an excellent after the shot dog and would unerringly retrieve the fallen game.

The SRHP is a passionate hunter. The dog is highly value

d by Slovakian hunters as the dog is biddable and focused in the field. However, this breed has other desirable attributes as well. The dog is loving, loyal and noted to have a calm temperament inside the house. This breed is a most suitable choice for the weekend hunter as the dog would be a wonderful home companion during the weekdays. Highly intelligent, this breed would be easy to train. A Slovakian Rough Haired Pointer does not have genetic health problems. This hardy breed has a life span of 14 to 15 years.

The body type of the Slovakian Rough Haired Pointer is very similar to the breeds from where it was developed. The whiskers, and facial furnishings as well as the rough or broken coat are typical traits of the Cesky Fousek and the German Wirehaired Pointer. The typical pewter-silver or tweedy gray brown coat colors are reminiscent of a Weimaraner. Eye color can range from the light colors of the Weimaraner to the deep amber eye color of the German Wirehaired Pointer.

This working dog has a noble head with a well chiseled appearance. The rectangular shaped skull has a moderate stop. The muzzle is straight and broad. Large nose is dark in color. Almond shaped eyes have dark eyelids. Puppies usually have azure eyes that turns into amber when the dog matures. The eyes have an intelligent and gentle expression. Broad based ears have rounded flaps and set on above the eye level. The medium length neck is well muscled. This breed has a straight well muscled back that slightly slopes to the rear and well pronounced withers. Broad and sufficiently long chest is deep reaching the level of the elbows. Ribs are well sprung and breast is well developed. The belly is moderately tucked up. Well furnished tail is rather high set. At rest the tail hangs downward and carried horizontally when the dog is on the move. The tail is usually docked to half its normal length.

This breed has a double coat. The straight 4 cm topcoat is flat and rough to the touch. The short undercoat is fine. Longer hair on the lower part of the muzzle forms a moustache. Short hair covers the forehead. Hairs above the eyes are more marked. The ears are covered with short soft hair. Coat color ranges from varying light and dark shades of brown or gray. The dog may have white markings on the legs and chest.

The Slovakian Rough Haired has a well balanced and affectionate nature. Highly esteemed for its excellent hunting capabilities the dog is also valued as it makes a wonderful home companion. Highly intelligent, the dog responds well to training. This loving breed is easy to live with. Energetic while hunting, this breed has a laid back attitude inside the house. Very calm and always eager to please, an SRHP is no doubt a superb companion. This affectionate fellow makes a lively but gentle pet and playmate of the children. The SRHP gets along well with other dogs in the household and tolerates other dogs too but because of a high prey drive, this dog should not be trusted with smaller pers. This breed is not for an owner living in an apartment or in the city. Being a working dog, it would have high exercise requirements. The dog would need a large fenced in yard to run as well.

It would not take a lot of efforts to keep a Slovakian Rough Haired Pointer looking good. Grooming is easy for this breed as the rough coat tends to shed dirt easily. Frequent bathing would not be necessary. It would only take a thorough brushing to remove the dried up mud on the coat of a dog that has been hunting. The rough coat would benefit from weekly brushing using a firm bristle brush. This dog is a retriever and the coat protects the dog when it retrieves in the water. Bathing should be done only when necessary so as not to remove the natural oils that water proofs the coat. Ear cleaning, teeth brushing and nail clipping must be made a part of the regular grooming routine.

The Slovakian Rough Haired Pointer is a relatively new breed of gundog that was developed in Slovakia in the late 1950s. Following the Second World War, the way of hunting in Czechoslovakia had undergone a major change. As majority of the good hunting dogs were lost during the war years, the need to develop a new breed arises. The new breed of hunting dog would have to be biddable. The dog should be able to hunt any kind of game from partridges to foxes. The ideal dog should be able to work on water as well as on varied types of terrain. As the dog will be utilized as an after the shot dog, it should be a good retriever with a good nose. This dog should not range too far given that a good Czech retriever should seek and retrieve at about 30 paces in front and 80 paces on each side.

Hunting in United Kingdom or in Ireland is far different from hunting in Czechoslovakia and in other Continental European countries. A Hunting Union that is organized in each European country is tasked to protect the sport. The union would also ensure that hunting dogs will be available by organizing dog trainings, giving out proficiency certificates and generally maintaining the working ability of each breed of hunting dog. This organization is not restrained by any kennel club rules so that if there is a need to improve a breed, it is a done thing to introduce other bloods to the breeding program.

The Slovakian Rough Haired Pointer is the result of breed amalgamation. A group of hunters headed by Kolomana Slimaka has started a breeding program that will create the ideal hunting dog. As the Weimaraners are the best dogs during that time it was used as the breeding foundation. The Weimaraners were crossed with the German Wirehaired Pointer and the Ceski Fousek and the Slovakian Rough Haired Pointer was born! This breed has surpassed the expectations of its developers. The dog not only hunts feathered game but it is also a courageous hunter that does not hesitate to fight with wild boars. The SRHP also hunts deer, foxes and kills vermin.

Because of a mistake in the translation of the Weimaraner standard the breed was once registered as Rough Haired Weimaraner. Although in 1975, the mistake was rectified by the German Weimaraner Club and the SRHP was removed from the Weimaraner classification. Due to the breeds outstanding working abilities it has gained enormous popularity. The SRHP was registered with the Slovakian Hunters Union. On June 6, 1982, the breed was officially recognized by FCI. Classified under the hunt, point and retrieve gundog subgroup, the SRHP was added to the Imported Breed Registry of the Kennel Club in 1998. The Slovakian Rough Haired Pointer made an appearance on the Meet the Breed segment of the famed British Crufts show in 2007.