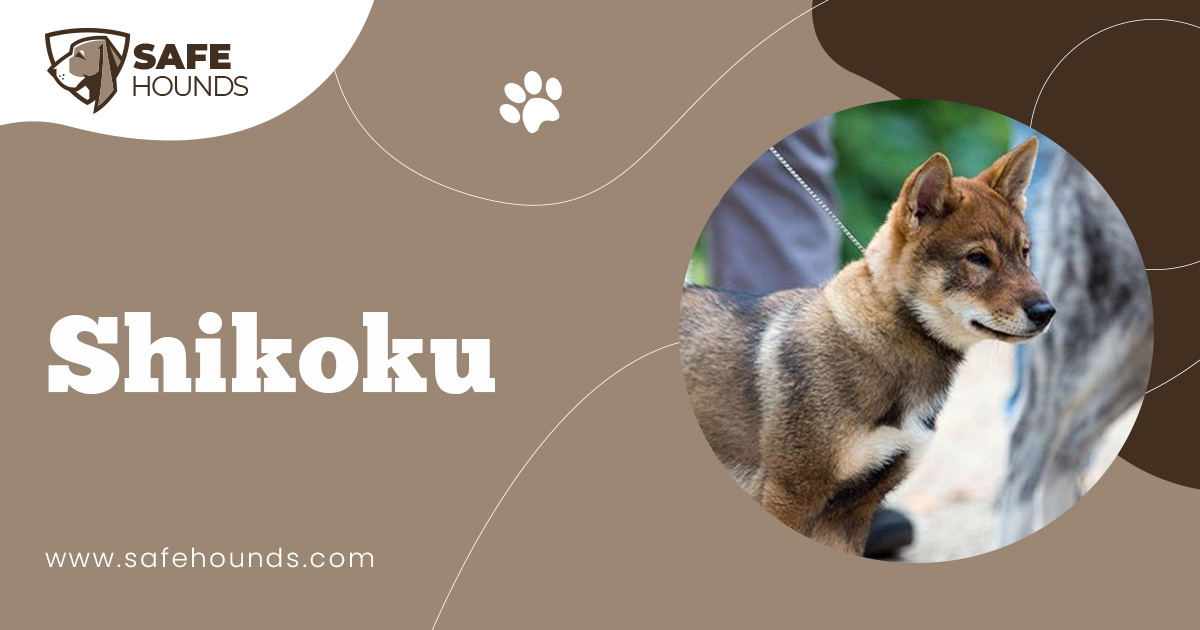 The Shikoku is one of the native Japanese dog breeds. This beautiful breed with impressive sesame colored coat got its name from the Shikoku Island where it was developed centuries ago to hunt large game. Wild boars and deer are the quarry of this breed. This Japanese dog is pure blooded, having existed in the remote mountainous villages of the Shikoku Island. The Shikoku like the Shiba, Hokkaido, Akita, Kishu and Kai has originated from Spitz type dogs. This breed has an overall wolf like appearance. It has a square shaped body, a wedge shaped head, prick ears and the tail that is well covered with longish hair curls at the back. This breed of hunting dog is most valued by matagi for its excellent hunting skills. This dog is often compared by hunters to a Japanese samurai because of its sharp features. When it comes to hunting, this brave and cautious dog shows good judgment in facing wild boars. The Shikoku and the Kai Ken are considered as deer hounds as well. In size, the Shikoku is between the Akita and the Shiba Inu but this medium sized breed is hardy and agile.

The Shikoku is a spirited dog. This excellent hunter and tracker makes a wonderful watchdog as well as it has an inherent distrust of strangers. Highly intelligent, this breed is known to be a quick learner. The Shikoku is not as obstinate as the other Japanese breed but it does show stubbornness once in a while especially when it is being trained. Positive consistent training method started at an early age will turn the dog into an even tempered, affectionate and loyal companion.

AppearanceThe Shikoku is a medium sized dog with a well boned, compact and muscled conformation. This beautiful breed has the urijaro markings. These are white or lighter colored markings on the side of the muzzle, on the cheeks, on the jaws and on the neck. The same markings can be found on the chest, underside of the tail and on the inner side of the legs. This breed has a broad skull. The stop is shallow but well defined. This dog has a rather long wedge shaped muzzle. The nasal bridge is straight and the nose is black. Strong teeth meet in a scissor bite. The Shikoku has well developed cheeks. Rather small triangular shaped eyes are dark brown in color and set well apart. Small triangular ears are firmly pricked and are inclining forward. This breed has thick powerful neck, well developed high withers and a strong straight back. The loin is broad and muscular, the deep chest has well sprung ribs and the belly is well drawn up. Set on high, the tip of the thick tail is almost reaching the hocks when let down. The tail is usually carried curved sickle-like over the back.

The Shikoku is an exceptionally beautiful dog. The straight outer coat is harsh to the touch, the undercoat is soft and dense. But what makes the coat impressive is the sesame coat color. A Shikoku can have a black sesame coat where the black hair is more than the white hairs or a red sesame coat where the red ground color of the coat is combined with black hairs. The tail that is covered with long hair adds to the impressive appearance of this hunting dog.

PersonalityThe Shikoku is a passionate hunter. It makes a dependable watchdog too. Because it is highly intelligent, it also excels in agility and aptitude competitions. These are not the only admirable talents of this native Japanese breed as it also makes a loyal, devoted and affectionate family companion. This energetic dog would be aloof with strangers but it shows its gentle affectionate nature to its human family. This playful breed tolerates even the rough handling of the children. This dog would be good with other dogs in the household but may show dominance over other dogs. Because of a high prey drive, a Shikoku should not be trusted with smaller pets. Very active outside, the Shikoku is quiet and calm indoors. The Shikoku is also an average barker. However, this does not mean that the dog would do well in an apartment. This athletic dog is a suitable choice of pet for a person who lives in the country or one that loves the outdoors as the dog would make an excellent jogging and hiking companion.

CareA Shikoku is a fairly healthy breed. If properly cared for, the Shikoku is expected to have a life span of 10 to 12 years. This breed sheds once or twice a year. This breed has minimal grooming requirements. Brushing the coat once a week would maintain the good condition of the hair and the skin. Brushing will remove dead hair and distribute the natural oils of the coat. However, the grooming routine should include eyes, ears and teeth cleaning. Nails must be regularly trimmed as well. A thorough grooming routine will ensure that any potential health concerns will be dealt with at once.

HistoryThe Nihonken are Japanese native dogs whose origin dates back to antiquity. These dogs were speculated to have come with the people that migrated from mainland Asia. Archeological finding have verified the fact that these dogs have existed during the Jomon Period (10,000 – 300 BC). Nihonkens are noted for their stamina, courage and great devotions to their masters. Six breeds of hunting dogs have evolved from the primitive Nihonken. These breeds of dogs that were developed in the different prefectures of Japan are the Akita, Keshu, Hokkaido, Kai Ken, shiba Inu and the Shikoku. All these Japanese dogs have the typical spitz body, double coats, prick ears and curled tail.

This dog took its name from Japans Island of Shikoku where the breed was developed. This dog was originally bred to hunt boars and deer in the remote mountainous region of Kochi thus the dog is often referred to as Kochi Ken, ken being the Japanese word for dog. The Shikoku is one of the purest breed in Japan. The Kochi ken is not a common dog. Outside its country of origin, this breed belongs to the rare breeds of dogs. Because of the isolation of the Shikoku Island and the inaccessibility of the Kochi prefecture a high level of purity was maintained while the breed is developing. Line cross breeding is also limited due to the isolation of Shikoku owners. This resulted to the development of different strains. The Shikoku has two original bloodlines – the eastern and the western from which five distinct strains were developed. From the eastern Shikoku line, the Tukushima (Iya) strain was developed on the northwestern foot of the mountain and the Kochi_Aki strain has evolved on the southeast part. Three strains evolved from the western Shikoku blood lines – the HataUwara (southwest), Hongkawa (south) and the Ehime-Ken (north). Later in the development of the breed, three varieties have finally evolved – the Hawa, Honggawa and the Hata. As there were no available descriptions of the different strains it can only be surmised that the difference lies on the thickness of the coat, on coat color and on the size of the dogs.

In the past when deer and boars are plentiful, these dogs are most valued by Japanese hunters (matagi). Once the Skikoku has tracked the boar the dog would either use the hoeru-dome mode of hunting where the quarry is detained by barking or the kami-dome method wherein the dog would restrain the boar by biting. Most matagi though would train the dog to hunt with the hoeru-dome method as it is less risky for the dog. When foreign breeds of dogs were introduced in Japan, the Japanese recognized the value of their native dogs. Efforts were made to preserve and to document the Japanese breeds. The Japanese Dog Protective league was created during the Showa era (1926-1988). Specimens of native Japanese dogs were collected from the remote areas and kept in kennels in the cities for supervision and protection. In 1937, the Shikoku was designated as natural monument of Japan. A Shikoku is a working breed. Present day Shikoku are still being used to hunt but quite a large number of these dogs are used to guard premises, to haul carts and sleds and at times to drove and herd animals. These valiant dogs are used in water and rescue operations as well.