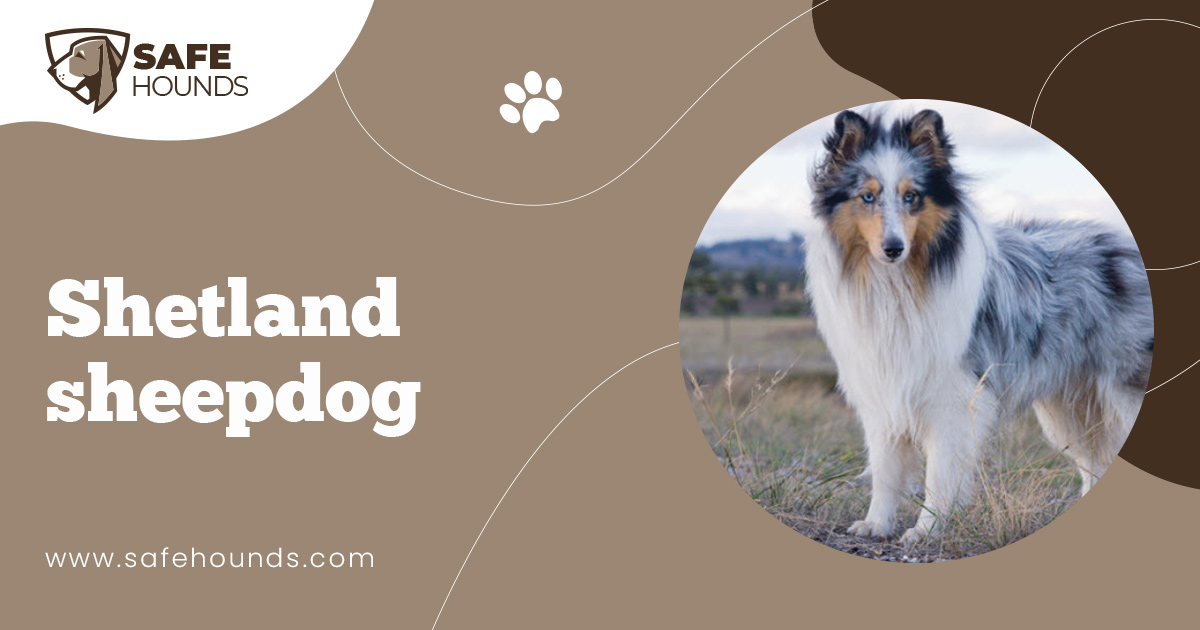 The Shetland Sheepdog is commonly referred to as the Sheltie. They look like a smaller version of the collie, though there are many differences between the two breeds. They were bred to be sheepherders in Scotland. They are a very beautiful dog with the long nose and and pie shaped head. They have long fur that is a double coat and their mane that resembles that of the lion. They come in several colors but the main color is the brown and white. Their almond shaped eyes are usually dark except in the blue merle dogs and theirs may be blue. They should always have a black nose and the teeth should have the normal scissor bite to them. These dogs are known for their speed and jumping abilities.

The males should always have that masculine look to them and the females the more feminine look. The girls are always dainty when they do things. The males do things with a more rugged grasp to it.

The shelties mental reactions are as fast as their movements and the breed is always anxcious to please their owner. They are naturally inclined to obey unlike many other breeds that have a mind of their own.

They have a great protective instinct and will make a great vigilant house pet. You may think they have a softer bark because of their size but think again. They do have a loud bark so you will certainly know they are around.

The Shetland sheepdog is a one family dog but it will not address everyone that is a stranger as bad either. They are not known for guard dogs. They are laid back and will not jump on people and some will not even look up from their nap when someone comes to the door.

The Shetland Sheepdog is known for being a smaller size and usually never gets to be more than 13 inches high and weigh around 14-17 pounds. Therefore, they are not a very big dog at all. Even though they are smaller, they are far from being a delicate dog.

There are several different colors of coat for the Shetland sheepdog. These include sable, tricolor, which is black, white and tan, blue merle, which is grey, black, and tan and the bi-blacks, which is black and white. The most popular color among owners is the sable.

The Shetland sheepdog has a long wedge shape to his head and the muzzle should be parallel to the skull. They have a lion like mane that will come around the neck, which is consistent with the longer hair on the rest of his body. They have a dense outer coat while the undercoat will be soft to the touch.

The feet are covered with feathery fur, as is the tail. The tail should hang down to his hocks and not stand or curve upwards. They have beautiful dark eyes that kind of make them look slanted. They will have an intelligent expression when you look into their eyes.

The nose should always be black and their bite should come to the scissor bite like most dogs. The have smaller ears that stand erect to the tips which should have a droop to them. They are very strong but not very muscular. The Shetland Sheepdog is very fast and can jump higher than most other dogs of this size. So do not expect him to stay inside a small fence if he wants out.

You will find the Sheltie willl be a fast learner because they are so willing to please and are a very loyal companion. Shelties are very good with children if raised with them. They still need supervision because of their smaller size they could be injured easily by children.

The Sheltie has been given the cover of being a yappy barker, but that is over rated to some degree. They can be trained to bark several times when some one comes to the door then stop.

They have a deliteful temper and are very gentle along with being one of the smartest breeds. They seem almost human like in their intelligence at times. They like to be kept busy. These are not the type of dog to lay around. This breed needs a lot of attention from you. They do not like to be ignored.

The Shelties double coat is water repellent, very long, straight and provides them with protection from the cold and rain. The undercoat is the one that provides the warmth in cool or cold weather.

They are a clean dog, so they do not need bathing often. Brushing is only necessary a few times a week if you desire. They will mat up in certain areas if you do not brush them and these area include behind the ears, under the elbow on their front legs and on their hind quarters. The more you brush them the prettier coat they will have. Toenails and hair between the pads need to be trimmed every couple of weeks to ensure traction and to prevent mud and snow from balling up on the feet.

The shelties came from Shetland Islands off the main coast of Scotland and came from what many say was cross breeding with the Border collie. This is where the smaller size came in to play. The smaller dogs were more likely to survive on the Shetland Islands than the bigger dogs because they needed less food and could find more places to hide being small to protect themselves from the elements.

The Shetland Sheepdog was brought over to America in the 1800s and gained popularity for being a herding dog. It is said that they guarded the sheep from birds that would peck at their sores. They would chase them away from the sheep, thus protecting the sheep from these pests. This is where many say they find their dogs chasing at low flying airplanes, as well. Of course, these owners lived close by airports. They would also go after any bird that came into their yard.

The first registration into the kennel clubs was in Badenock Rose in March of 1909 Kennel gazette. 28 Shelties were registered in 1909. The breed dwindled in May through September as only 12 were registered during that time. They were registered as Shetland Sheepdogs as a breed instead of being a category.

They were registered into Westminster in 1929. However, it took them four years to have their first specialty show. The standard in shows was the Collie miniature but now they have reduced the size to 13 to 16 inches for the smaller Sheltie.

The Shelties have become more popular among Collie lovers because of their size. They do not want a big dog if they live in the city. This is where the Shelties fit in nicely. They are smaller so they are ideal for apartment living.

Known as a Shetland sheepdog is was given the nickname, Sheltie in 1909. Today, that is usually what everyone calls them, it is rare to hear them called Shetland Sheepdog. In many cases, most people would not even know what dog you are talking about when they hear the name Shetland Sheepdog.