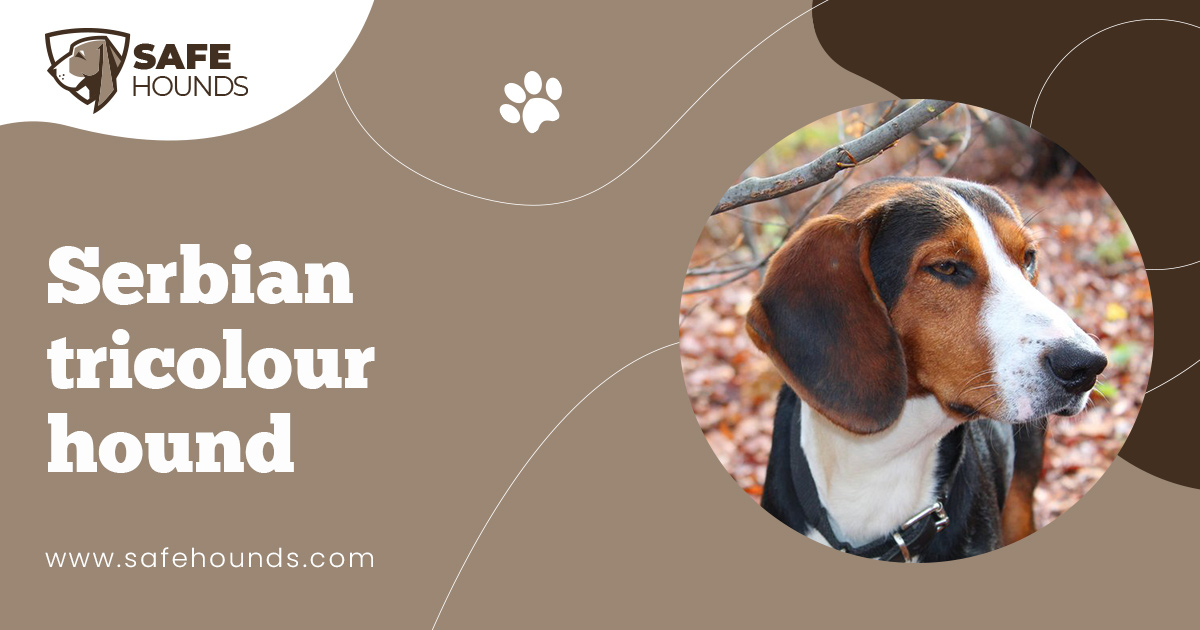 The Serbian Tricolour Hound is considered as one of the rarest breeds in existence. This breed is one of the three hounds that were developed in the former Yugoslavia. Before the split up of Yugoslavia, this breed is known under the name Yugoslavian Tricolour Hound. Since its development this breed has been utilized as a hunting companion. This dog is one mean hunter of small game like foxes and hare. Because of the dogs strength and ferocious nature, it is also utilized to hunt wild boar, feral pigs and other large game. Unlike other hounds that are hunted on a leash, this bred is allowed by the human hunter to run free and to seek the quarry on its own. This independent hunter will never be daunted by difficult terrain. It uses its excellent scenting ability to find is quarry. With its booming voice, this dog will alert the human hunter when a game is found. Unfortunately, this tenacious and tireless hunter was not introduced to hunting enthusiasts in other countries. This rare breed is relatively unknown in other parts of the world.

Having been developed from the Phoenician traders hounds, the three breeds of Yugoslavian hounds have almost the same confirmations. Oftentimes, these dogs are identified as the same breed. But what distinguishes the Serbian Tricolour Hound from the other two breeds is the white mark on the chest that enhances the striking appearance of the deep red base coat color and the black mantle. The handsome appearance as well as the well balanced and gentle temperament of this breed is the reason why in recent years this breed has evolved into a loyal and affectionate companion. Generally, hunting hounds make poor companions. Stubbornness is a typical hound trait. However, the Serbian Tricolour Hound is highly intelligent and it is noted for its eagerness to please. These lively hounds are known to amuse the family with little tricks.

The remarkable hunting ability and the gentle and affectionate nature are the reasons why this breed is most admired.

The Serbian Tricolour Hound is a medium sized dog but it is apparent that this breed has a robust constitution. This breed has a dolichocephalic head. It has a slightly rounded skull and an almost imperceptible stop. The cuneiform muzzle that is shorter than the skull progressively tapers from the stop to the well developed always black nose. This dog has thin close fitting black edged lips, strong jaws and teeth that meet in regular scissor bite. Medium sized almond shaped eyes have black irises and dark pigmented eye rims. This breed has a set on high pendulous ears. Medium in length, the rather thin ears hang close to the flat cheeks. This hunter has a powerful slightly arched neck. The rectangular body has a straight topline, a slightly pronounced withers and a strong well muscled back. Loins are well muscled as well. Chest is strong and the belly is slightly tucked up. The tail that reaches the level of the hock is abundantly covered with hair. Strong at the base, the tail tapers progressively to the tip. Tail is carried slightly curving up but never above the line of the back. Strong forequarters are straight and parallel. Shoulders are strong and well muscled. Strong hindquarters are straight and parallel as well. This breed has well muscled straight thighs.

A Serbian Tricolour Hound has a well pigmented elastic skin. The abundant gleaming short hair is slightly thick and lying well. Undercoat is rather well developed. Hair on the underside of the tail and on the back of the thighs is slightly longer. This breed has a deep red or fox red base coat, a black mantle that extends as far as the head and black marks on the temples. The white mark on the chest that distinguishes this breed from the other two Serbian hounds extends to the tip of the breast bone, to the belly and inside the legs. The tip of the tail can be white as well. The dog may have a white star on the head. The white blaze extends down to the muzzle and forms a collar around the neck.

The Serbian Tricolour Hound is greatly admired for its exceptional hunting talent. This breed is loyal, loving and obedient to it human family as well. A well socialized dog would be the superb companion and pet of the children. The genial nature of this dog is not for the family alone. The friendly nature of the dog is shown to other people and to other animals as well. Hunted in packs this breed is used to having other dogs for company thus it tolerates other dogs well.

Unfortunately, these dogs are not for everyone not for someone who does not have adequate space and not for an owner who does not have sufficient time to devote for the care of the dog. The Serbian Tricolour Hound is a working breed. As such it is expected that this breed would have extensive exercise requirements. This breed can live in an apartment or in a city but it would take a lot of efforts for the owner to ensure that the dog is provided with sufficient opportunities to exercise. Otherwise the dog will be destructive. Remember, this breed is a barking hunting dog and one that is not given the right amount of exercise will annoy the neighbors with its incessant barking and would manifest destructive chewing and digging behaviors.

The low maintenance coat is one of the pluses in choosing this breed. Short coated dogs would need very minimal care. This breed is for a busy owner as running a soft bristled brush on the coat of the dog once a week would be sufficient to maintain its good condition. Dogs that are kept as house pets need not be bathed very often as well. However, if the dog is hunted it would need to be thoroughly brushed not only to remove dirt from the coat but also to make sure that the dog has not picked up external parasite while it was hunting.

The Serbian Tricolour Hound also known as Yugoslavian Tricolor Hound is a very rare dog breed. This is one of the three smooth coated hounds of Yugoslavia. The other two hounds are the Serbian Hound which is prevalent in the eastern regions of Yugoslavia and near the Bulgarian border, the Serbian Mountain Hound is from the southwestern Planina range. The Serbian Tricolour Hound is also from the southern regions of Yugoslavia. All these Yugoslavian Hounds have almost the same conformations and differentiated only by some distinct breed characteristics. These Yugoslavian breeds have been confined in the regions that border Greece. Along with the Greek hounds, these Serbian hounds are the only breeds of scent hound in the Balkan regions and in southeastern Europe.

It was presumed that the Serbian Triccolour Hound was developed from the other Serbian Hounds in the early 20th century. In fact this breed was once considered to be a variant of the Serbian Hound. Although this was refuted by breed enthusiasts as they believed that along with the other Yugoslavian hounds, the Tricolour has existed for centuries and that this breed has also descended from the hounds that were brought by the Phoenician traders in the Balkan territories. This theory though has never been proven scientifically.

The Serbian Tricolour Hound is an ideal hunters partner. This breed hunts foxes and hares like the other Serbian hounds but this is a hardier and more ferocious breed. A Tricolour hunts feral pigs and wild boars. This breed is an exceptional hunter and for hundreds of years it has performed the job it loves to do. However, in recent years, this breed is frequently seen playing with children and being the energetic and loyal biking and jogging companion of its master. Because of a well balanced temperament, this breed has evolved into a dependable and loving dog that provides the family with warm companionship.