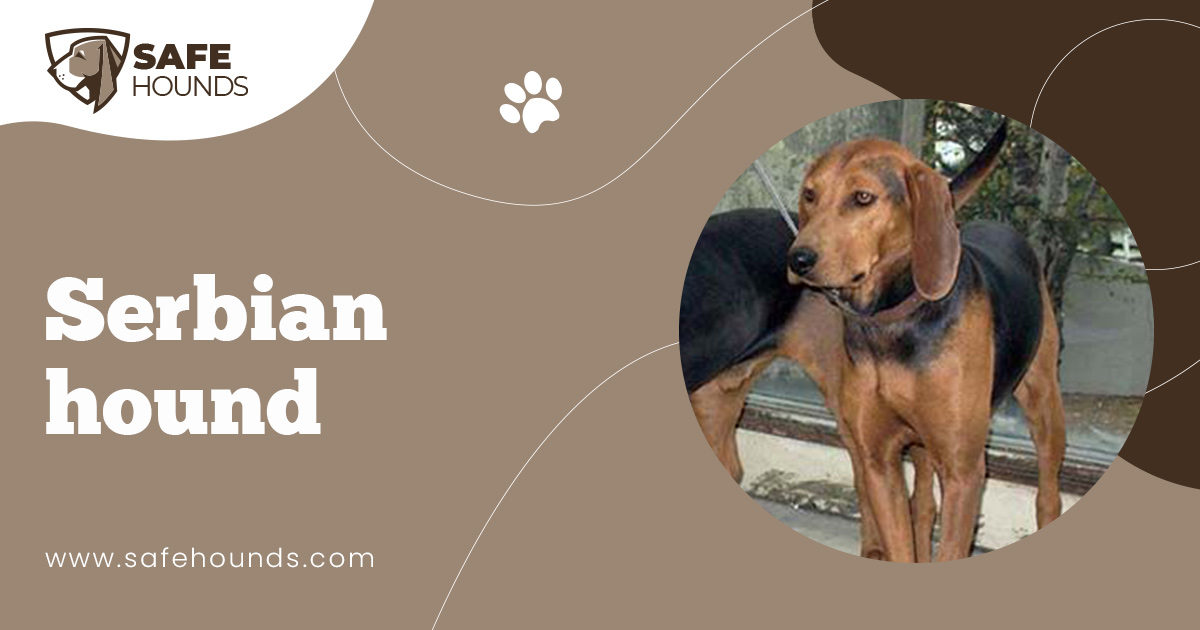 Known as the Balkan Hound in the early part of its history, the Serbian Hound is highly valued by hunters in Serbia and Montenegro for its remarkable hunting ability. Apart from having a good nose and a booming voice, this hound is a tenacious and tireless hunter. The Serbian Hound scents, tracks and hunts deer, foxes, rabbits and hare. These dogs are either hunted singly or in packs. Also known as Balkanski gonic and Srpski Gonic, a Serbian Hound is a medium sized dog with a robust constitution. This breed stands between 17 and 21 inches and has an average weight of 44 lbs. The short, smooth coat that is rather harsh to the touch has a fine looking red or tan color. The black saddle enhances the beautiful appearance of the dog.

The Serbian Hound is a hunter. Through out the dogs history it has been the able hunting companion of hunters. The tenacious nature of this dog is one of the reasons why it is highly valued by its owners. To a Serbian Hound, bad weather and difficult terrain will never be a deterrent in finding the prey. This breed forms a strong bond with its master and when it is not hunting, the dog plays another role that of being a lively and affectionate companion. The Serbian Hound is a lively and happy breed. The dog thrives on steadfast relationship with is human family. Highly intelligent and obedient, this breed is easy to train. Teaching the dog to do little tricks is easy as apart from the desire to please the master the dog also shows an aptitude to learn. This breed makes dependable watch dog as well. Highly alert, the dog will not fail to warn the family of intruders.

The Serbian Hound is a fairly healthy breed. No major health concerns are specific for these dogs and they are expected to live for 12 or 14 years.

The Serbian Hound is an impressive looking dog. This tenacious hunter noted for its excellent scenting ability is also valued for its beautiful appearance. This breeds elastic and well pigmented skin is covered with short but abundantly growing shiny hair. The slightly longer hair on the back of the thighs and on the underside of the tail adds to the striking appearance of this dog. Coat color range from red, yellow-red and a rust tone. This breed has a black saddle that extends to the head, black markings on the side of the temple and some individuals may have a round white mark on the chest.

This breed has a dolichocephalic head. In profile, the dogs skull appears to be slightly rounded. The well developed muzzle tapers to a nose that is always black. Medium sized, oval shaped eyes have dark irises and set slightly slanting. Ears of medium length and width have slightly oval tips. Set on high, the ears hang down close to the cheeks. A Serbian Hound has a slightly arched neck. The slightly oblong body has a straight topline, slightly pronounced withers and well muscled loins. The croup is well muscled and slopes slightly. Belly is slightly tucked up. The tail that forms an extension of the croup reaches the hock. It is strong at the base and progressively tapers towards the tip. The tail that is abundantly covered with hair is carried below the back line but slightly curving up. Powerful forequarters are parallel and well muscled. Shoulder blades are muscular. Well muscled and parallel hindquarters are flat and strong.

A Serbian hound is docile and will show a calm demeanor when it is not hunting and when it is inside the home. Although when the dog is in the company of the children it will show its lively and gregarious nature. The dog is sweet and gentle with the children and it is really quite amusing to see the dog entertain its playmates with little tricks. The sociable nature of the dog is not for its human family alone. The friendly nature extends to other animals too. Having been frequently hunted in packs, this breed tolerates other dog and is known to be good to other smaller pets as well.

The Serbian Hound is an active outdoor breed. This breed is very strong and has a high level of endurance. It is expected that the exercise requirements will be extensive. This breed is not a good choice for a prospective owner living in an apartment. The dog would need a large yard where it can run and expend its excess energies. An under exercised Serbian Hound will act out and be difficult to handle. The dog will ignore learned housebreaking training and will manifest its boredom through destructive chewing and digging. This breed has a strong hunting instinct. A fenced in yard is necessary otherwise this dog would run off when it finds an interesting scent.

The Serbian Hound is one of the breeds that need minimal grooming. One of the benefits of owning this dog is its low maintenance coat. Brushing the short coat regularly would be enough to distribute the natural oils and to maintain the coats good condition. Of course nail clipping, ear and teeth cleaning should be made a part of the grooming routine.

The Serbian Hound is one of the breeds of scent hounds that existed throughout the Balkan territory. Origin of this breed can be traced back to the 18th century. Some dog experts even believe that the breed has existed in the Balkan region as early as the 14th century although just like any other ancient breed this theory does not have a scientific basis. It was speculated that the hounds from Asia Minor have prominently featured in the development of this breed. It was thought that ancestors of this breed of scent hound were the hounds from Egypt that were left by the Phoenicians traders in the Balkan regions around 1000 BC. This breed was then known as Balkan scent hound and the first record that described the breed was made in the 11th century by Frank Laska. In 1924, the first breed standard was drawn. In 1939, breed standards were announced in Stockholm and among these standards is the one for the Balkan scent hound. On May 14, 1940 at a session in Bled, the breed standard was finally adapted by FCI.

This breed is widespread in the Balkan territories but it is more prevalent in Serbia thus the first registrations were made in the stud book of the Yugoslav Cynological Association. FCI has acted on the motion made by the Yugoslav Cynological Association to change the name of the breed given that it is most widespread in Serbia. On November 12, 1996 at a meeting in Copenhagen, the name Balkan Hound was replaced with Serbian Hound.

Throughout the history of this breed, it has proven its superior hunting abilities. With its excellent scenting ability and its inherent passion to hunt, the dog is a highly valued hunter of rabbit, fox and deer. This tenacious hunter is also known for its gentle and lively nature qualities that make this breed a most suitable companion. Well appreciated and popular in its country of origin the Serbian hound is rare in other lands. This dog is rather hard to come by. Locating a breeder is quite difficult and if ever you find one, the extremely high prices as well as the long waiting list can be very frustrating.