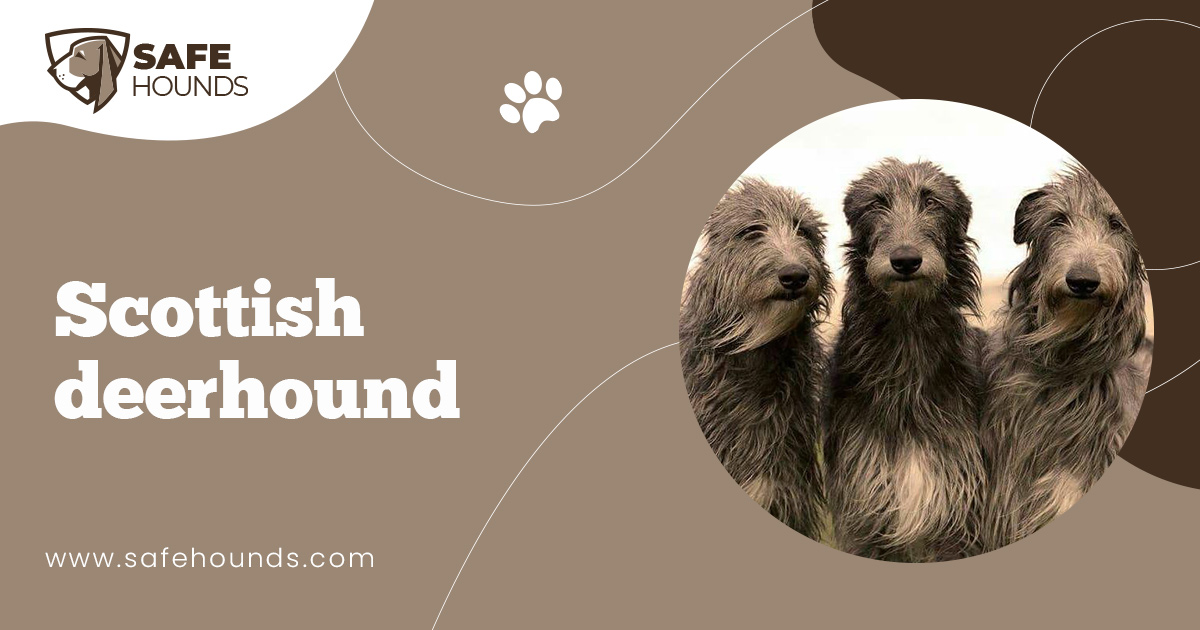 The Scottish deerhound looks almost like a Greyhound that has had a very bad hair day! The Scottish deerhound is larger and bigger boned than the Greyhound. The Scottish Deerhound is tall, slim, he has a mane, mustache, and beard, which are about 3 to 4 inches long. His coat looks like wire and it comes in various shades of a bluish gray, fawn, or brindle. They have dark ears and muzzle. The coat is softer on the under parts and his head. They carry their head held high like royalty and keep it in balance with the rest of his body. Many say they look to be starved because they have a stomach that is very high up and almost non-existent. This is farthest from the truth. This is just the lithe body of this type of dog.

His eyes are can be either a hazel or chestnut color and the nose is dark. The Scottish Deerhound holds his ears against his head until excited then they are held high up on the head. His tail is long almost touching the ground with its slim shape.

The deerhound is not for everyone, so there should be careful consideration in picking out this dog. He will probably not bring you a stick if you throw it or bark when someone comes to the door, but if you leave a roast out to defrost on the stove this is a snack to be had by him.

He is a big puppy and loves his long naps just as you do. If you do get one of these dogs, your life has changed forever. You will need to accommodate his size and his health care. In return, you will have a friend who is loyal and loving for life.

The height of the Scottish Deerhound is 30 to 32 inches and weighs in at around 85 to 100 pounds. The females are about 3 inches shorter and weigh about 10 to 15 pounds less than the males.

Their coat is harsh and has a wiry feeling, which is all over their body about 3 to 4 inches in length. The belly, breast area, and the head it is much softer than the rest of the body hair. They usually have a slight fringe on the inside of the legs but nothing like the collie does. They come in a bluish grey color and have been known to have colors such as yellow and sandy or red with red fawn. White is condemned by all establishments. They will allow white on the toes and chest but this dog is one to be self-coloring.

His head should be broadest at the ears and narrowing into the eye area. The muzzle will taper towards the nose into a pointed shape and he will have a level lips and strong bite.

His ears should be folded until excited then held high. They should be soft and the smaller the better. The color of the ears should be black or dark no matter what color the coat is.

His tail is long and slender within 1½ inches from the ground. Dropping into a curve when motionless and wagging exactly when excited. It should be covered all over with hair but not feathered at all.

They have dark set eyes and very light colored is not acceptable. They should have a soft look when in a relaxed state, but a keen, far away look when he is roused. The rims on their eyes should be black.

The Scottish Deerhound is an elegant dog, which is very gentle, loving, and loves children. They are not watch dogs, but they are very loyal and devoted to you. You may find him slow to obey commands but give him time and he will catch on.

They seem to get along with other dogs, but watch them with other non-canine animals.

They are a large dog and need their exercise as a youngster to develop properly. They do not need a large house to live in, but they do need to have a large yard to receive adequate exercise. The Scottish Deerhound needs more exercise than a walk in the park on a leash can give or even running around a small yard. If they do not get their needed exercise, they will become destructive and you will come home to a huge mess. The adults usually spend most of their time stretched out on the floor or couch napping.

They would prefer to have another deerhound as a companion and to romp and play with when you are not around.

They love company and are good with children, but do watch them around the smaller ones because of his size. He can knock a little one down and not mean to just by rubbing against them. They are very docile though and are not prone to biting.

The Scottish Deerhound is not recommended for an apartment but a nice house with a big back yard. They need to have exercise but not a lot. Just enough to tire them out, then they usually sleep. They should not be left off a leash or out of a yard because they are extremely fast and will chase after anything that moves.

They do make a great friend for joggers as they enjoy running a bit as well. They live to be around 10 years old.

The Scottish Deerhound is an average shedder and their coat does need to be groomed extensively. You will have to spend some time trimming and stripping their coat. Bathing them is only necessary when they get dirty, as they are pretty clean overall.

The greyhound is a centuries old inhabitant of the British Isles and this is where the distinctness of the breed excelled and then the distinctive dog became known as the Scottish Deerhound.

This dog was bred to hunt deer for the Scottish Chieftains in the middle ages. With hunting in the harsh climates, they gained a coarse protective fur coat. The Hound gained so much popularity with the Scottish that they became known as the royal dog of Scotland. There was a decline with the Scottish Deerhound because of the arrival of gun hunting, the progress of fenced agriculture and the decrease of the Scottish clan System. This was such a problem that this breed almost became extinct.

In the 1800s the breed was saved due to the help of two brothers by the names of Archibald and Duncan McNeill when they started breeding them. Queen Victoria and Sir Walter Scott both fancied and owned a Scottish Deerhound themselves. Around the time of World War II in Britain, these big dogs were hard to feed, so many people put them to sleep because of the lack of food. There were some people however, that were dedicated to their hounds and kept them around.

As of today, these dogs are mainly companion dogs but some people do still use them for hunting game because of their keen sense of smell. Some of their other talents include hunting, sighting, racing, agility, tracking, and lure coursing.

The popularity of Grey Hound racing was started and instead of destroying the dog when they were beyond their racing years a Grey Hound rescue was started for this breed. Many of Lancers paintings and drawings depict the grace beauty and dignity of the Deerhound. Famous painting owned by Sir Walter Scott was the famous Deerhound Maida and described this breed as The Most perfect creature of Heaven.