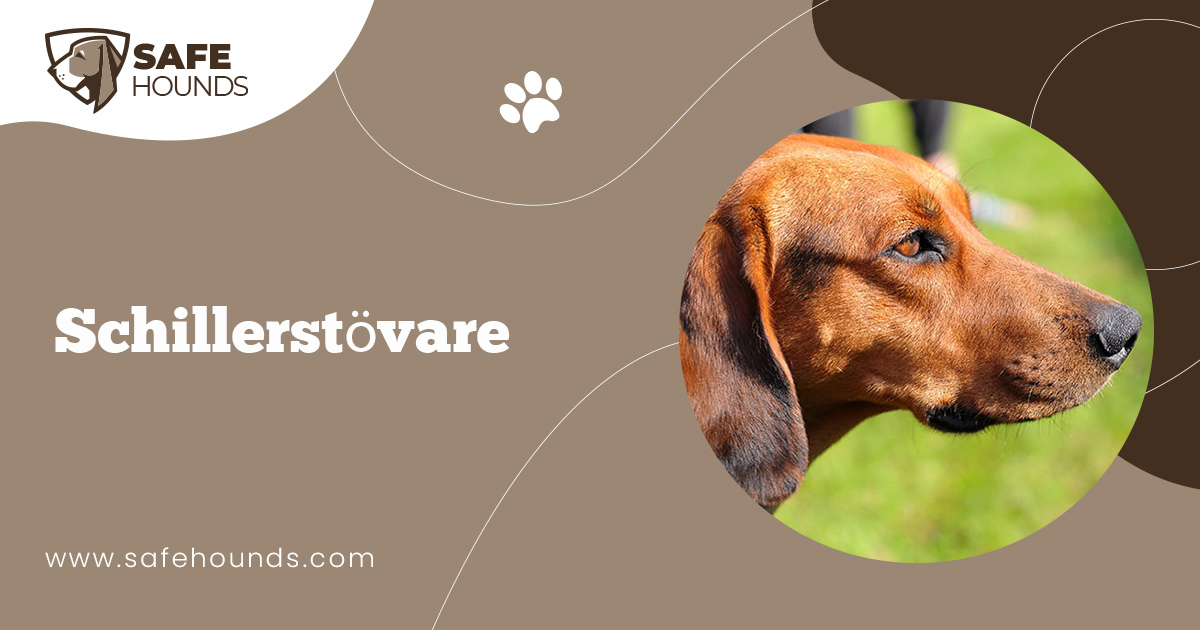 The hunting dog for the Frozen Land! That is the title given to the Schillerstövare by breed enthusiasts. The compliment was aptly given for the Schillerstövare also known as the Schiller Hound as it is considered by the Swedish Kennel Club as the fastest Scandinavian hound and one that can easily endure the freezing cold while hunting for long periods in snow covered terrain. Aside from the speed this breed is also noted for its tremendous power.

The Schillerstövare originated from Sweden. This hardy hunting dog was created by a farmer named Per Schiller who wanted to have a dog that will track and hunt foxes. Native Swedish dogs were crossed with scent hounds from Germany, Switzerland and Austria and the dog that took the breeders name was born. The Schillerstövare is an energetic dog with a natural instinct to hunt. This zealous hunter possesses a powerful voice that alerts the human hunter when a prey is found.

A Schillerstövare is a beautiful breed of hunting dog. This lean but well muscled dog has a rich golden tan coat that is made impressive by the jet black mantle. The dog is one mean hunter and highly valued by Swedish hunters for its tracking and hunting abilities. However, the impressive appearance coupled with a docile and calm temperament makes this breed a good candidate for a home companion. This bred is loved not only for its hunting prowess but also for the loyalty, for the affection and for the companionship it gives to its human family. The Schiller Hound makes a good family pet and companion but this breed would need early socialization and consistent training. This dog is intelligent but training can be quite difficult given that this is an independent breed. This breed is wary of strangers and as such would need early socialization as well.

The Schillerstövare may be a medium sized dog but the well boned and sinewy body gives the impression of extreme strength. This beautiful breed has a longish triangular head. The skull that is broad between the ears is slightly arched. The stop is well defined. This dog has a long muzzle, a straight nasal bridge that is parallel to the skull line and a black nose with well developed nostrils. Tight and close lying lips enclose strong well developed teeth that meet in scissor bite. Dark brown eyes give the dogs face a lively expression. Soft set on high ears hang down close to the cheeks. The ears are raised slightly if the dog is alert. A Schiller Hound has a long powerful neck that is closely fitted with supple skin. This breed has a strong level back, muscular slightly arching loins and the well developed chest that reach the level of the elbows has moderately sprung ribs. The tail that is set on line with the level back has a wide base and tapers towards the tip. The tail reaches the hock. It is either carried straight or slightly curved but never above the level of the back. Well boned, straight and parallel forelegs descend from muscular shoulders. Strong hind legs are parallel when viewed from behind. Broad thighs have well developed muscles. Not too short harsh coat lies very close to the body. The hair on the head, on the ears and on the front of the legs should be shorter and smoother. The back of thighs and the underside of the tail may have longer hair. This breed has an impressive appearance because of well defined black mantle on the tan coat. The black mantle covers the sides of the neck, the back and extends to the sides of the trunk and to the upper part of the tail. An adult Schillerstövares tan hair should not blend with the black. Black marking on the cheeks and small white marking on the chest and on the toes though are acceptable.

A Schillerstövare is a lively and affectionate dog. Energetic while hunting, this breed is calm inside the house and would only show it lively nature when playing with the children and when it is accompanying a family member for a walk. This dog tolerates other dogs in the household especially if socialized well. However, because of a high prey drive, the Schillerstövare should not be trusted with smaller pets. It would be wise to keep the rabbit inside a sturdy cage otherwise the dog may decide to play with the small pet. This breed is not a recommended pet for apartment dwellers. The dog has high exercise requirements and it would take a lot of efforts for the owner to make sure that the excess energies are expended.

This breed would not require too much grooming time. Regular brushing would remove loose hair. Rubbing the coat with chamois cloth would bring out the sheen. This breed though is a hunter. After the dog is hunted, the coat should be brushed and the ears and feet checked thoroughly for mites and foreign bodies that may have been picked up by the dog.

In 1886, 189 scent hounds were shown in the first Canine Exposition in Sweden. Among the dogs exhibited were the brother and sister hounds owned by farmer Per Schiller. Tamburini and Ralla 1 became the foundation of the breed of hounds that took the creators name  the Schillerstövare or the Schiller Hound when the breed was recognized by the Swedish registering body in 1952.

The Schillerstövare is a breed of rugged hunting dogs noted for their exceptional ability to hunt hares and foxes. This breed has descended from the famous hound of the Kaflas estate. This breed was developed in Swedens West Gothia area when Per Schiller crossed native Swedish hounds with the Kaflas estate hounds that originated from southern Germany. The dogs were further crossed with Swiss hounds. The Harrier, a breed of British Hound was also introduced to the gene pool. This resulted to the development of an energetic breed of hunting dog that is noted for its natural instinct to hunt. The breed is also considered to be the fastest Swedish Hound. And more importantly, the dog has the ability to skillfully hunt in snow covered terrain. The dog is equipped with a coat that withstands icy temperature.

This outstanding breed of hunting dog was recognized by Swedish registering body only in 1952 and was officially recognized by the Swedish Kennel Club in 1907. The Schillerstövare may be considered as a fairly young breed but ancestors of this breed have hunted the forests of Sweden since the Middle Ages. It was believed that East European types of hound were brought to Sweden by returning soldiers during the 15th to 16th centuries.

The Schiller Hounds elegant look belies its strength, speed and endurance. The strong and well angulated body gives the dog the stamina and the capability to tirelessly pursue the prey even in hard winter climate. This breed has a very powerful voice. The Schillerstövare is considered by Swedish hunters to be the best hound to hunt foxes. Highly appreciated in its country of origin, 140 Schillerstövares are registered yearly in the Swedish Kennel Club. Because it has a calm and obedient temperament, this tireless and passionate hunter is also commonly seen in the Swedish homes being the loyal and affectionate family companion.