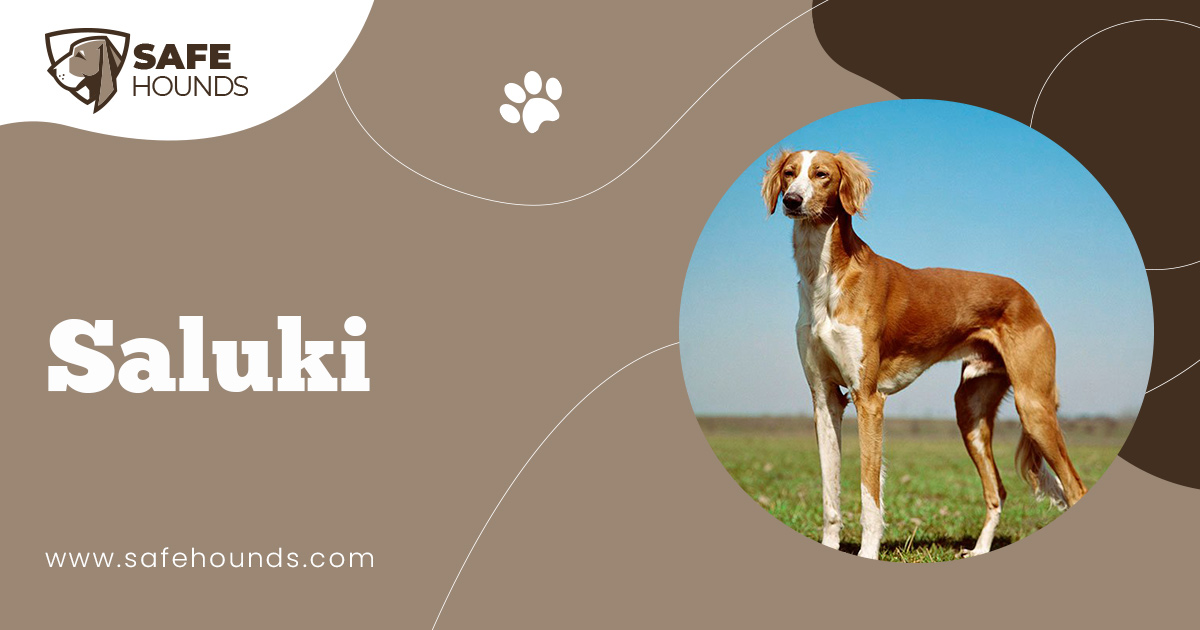 The Saluki is a beautiful standing dog. They are very well known for their hunting and racing ability. These dogs can run over 40 miles per hour and some have been known to go even faster than that. The Saluki is a wonderful companion dog that anyone would enjoy having as part of his or her family. They are very calm and gentle with family members. A Saluki is known to become attached to one person in the household, but they will still love everyone else the same.

The Saluki resembles a grey hound with their slim sleek bodies. They also take after them with their running and hunting ability. The Saluki may look as though they are not meant as a household dog, but the truth is they are actually are. They are wonderful companions for any house. Just make sure not to have too many other cats and dogs around. They prefer to be around other Salukis in the house. They can do well with other pets around as long as they are canine. Salukis do not do well with other non-canine animals in the house. Therefore, if you have Gerbils, Guinea Pigs, or any other kind of animal in the house they may tend to hunt it, as this is their instinct. It is best if you own a Saluki that, you do not own any other animals except Salukis.

Salukis are wonderful dogs and they have had problems in their history but now today people are giving them a chance. Today, the adoption of Greyhounds is very high and with individuals learning more about the Saluki, they are becoming more well known. However, too many people do not think of them as companion dogs but more as a running and hunting dog.

The Saluki has a body like a Greyhound. They have such grace and balance when they run. When they run at top speed all four of their legs are in the air all at the same time. Their body is slim like the grey hound body. They have silky featuring on their tail and their ears. There is another variety called the smooth coat with no featuring at all but this is rare to find. Their coat comes in colors of black and tan, fawn, cream, gold, white, and gold and red. There is a mix of some of these varieties of these colors that can be seen as well.

They have a well-portioned narrow head that tapers gradually down to their nose. Their ears hang down low and are long. They have large and skinny eyes that are either a dark brown or a light brown in color. Their eyes give off a nice, sweet dignified expression. Experts have stated the Saluki has the best eyesight around. They have a long body with muscular shoulders. They have hair between their toes to protect them on rough terrain when running.

The Saluki is an even-tempered dog and can do pretty well with older and gentle children. You may find that the Saluki will become attached to one person in the household over other members, but they will still love everyone. This just means they will prefer the company of one member over another member of their family.

These dogs are affectionate and gentle. Since they are so skinny, they cannot take rough-housing with anyone. When it comes to discipline, they cannot take a harsh voice so you will need to find another way for discipline. The Saluki can be skittish around strangers and other dogs that may be around. They can even seem aloof to their own family at times. If you want another dog in the house then think about getting another Saluki.

The Saluki can be a good watch dog. They are a calm and pleasant companion as well. They are good with cats and dogs, but they do tend to chase non-canine animals, so make sure they are not in the household with a Saluki around.

The Saluki is best for a large home with plenty of acreage for them to enjoy. They like sleeping indoors and they do not mind warm weather. If it is to hot they will start to feel uncomfortable.

The Saluki has a coat that is easy to groom. Just simply brush and comb them regularly and make sure to brush the longer hair very well. Make sure to check and clean their ears regularly. The Saluki is an average shedder.

When taking your Saluki outside for exercise make sure, they are fenced in, without any holes in the fence or ways for them to escape. They are hunters and they will hunt at first sight of any non-canine animal. Some of these dogs have been lost or killed because they take off in search of game. These dogs can run over 40 mph and are hard to catch. So make sure they are on a good leash or in a very well fenced in area.

The Saluki is the royal dog of Egypt. He may be older than the oldest civilization. They received their name from the Arabian city Saluki in the Middle East, which is no longer found on any map as it is now under sand. They found many mummified bodies below the sand in this area like the Pharaohs themselves. There have been many pictures of the Salukis in the tombs dating back to 2100 BC. They have always been thought of a sacred gift of Allah, so they were never sold or traded only offered as gifts.

Other names given them were Gazelle Hound, Arabian Hound, or Persian Greyhound, as its appearance would show. They say it may even be closely related to the Afghan Hound. They have brilliant eyesight for the desert. Their speed and agility makes hunting easy for them across the desert terrain. They have been used to hunt gazelle, which is the fastest of the antelopes. They have also hunted fox, jackal, and hare. The Saluki can jump 20 feet from a standing position so it was a great hunter.

The Besouin valued them for their beauty and hunting skills. They slept with their owners in the tents so they were protected from the heat and the cold at night.

When first brought into England they were known as Persian Greyhounds. No one really cared about them until Hon Florence Amherst imported the first Arabian Saluki in 1895 from the kennels of the Prince Abdulla in Transjordania. There name means one who gallops in Persian speaking countries.

The Saluki descended from small numbers and must be carefully bred to avoid inbreeding. They still have the largest genetic base among any animal from the Middle East. The American Kennel Club only recently allowed the Country of origin Salukis to be registered so the DNA base will increase even more as they are imported into the United States.