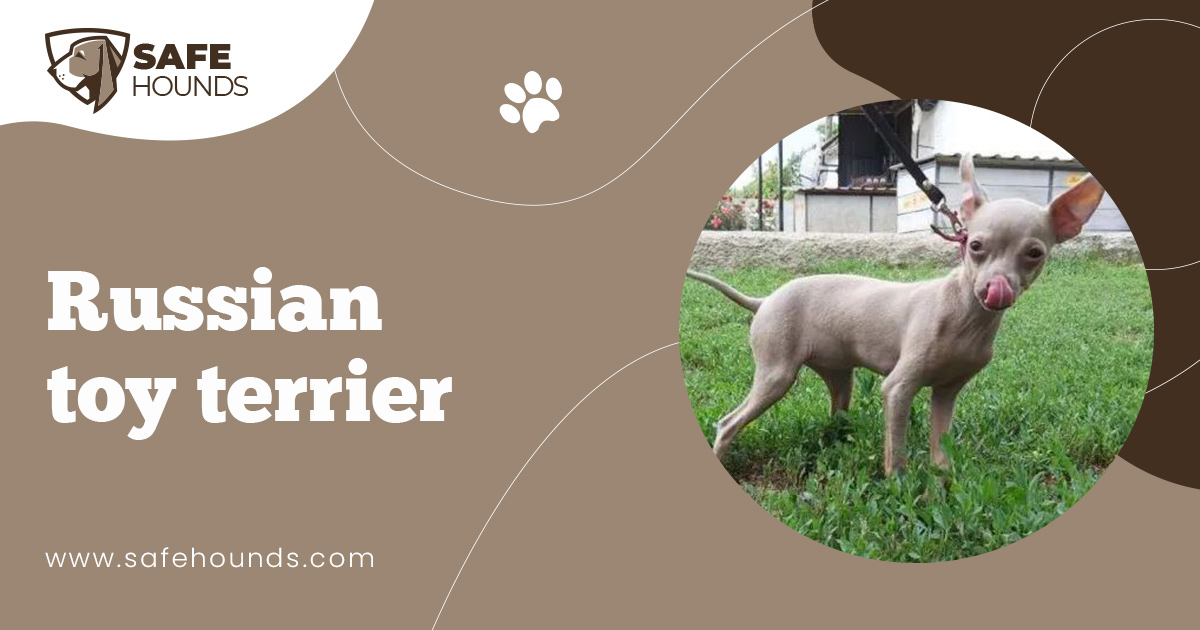 Russian Toy Terrier is one of the smallest if not the smallest dog in the world. Everything about the dog is small except for the round eyes that can be considered large if the diminutive size of the dog is taken into account. Toy dogs are expected to be small. Toy dogs are often seen wearing cutesy little doggie outfits. Dogs of this type are commonly seen cuddled by famous personalities or carried in posh designer bags. This toy breed is no different from other toy breeds. But a spectacular feature that never failed to gain attention is the very noticeable fringed ears that resemble the wings of a butterfly. Long plumes of hair extend from the dogs ears. Russian Toy Terrier has two variants – the long haired and the short haired. Both types have smooth glossy skin but the long haired type has fringed ears and the short haired variant resembles a miniature deer.

This breed was developed in what was then known as the USSR. This toy breed resembles a longhaired Chihuahua. It was speculated that the Chihuahua, the Yorkshire Terrier and other breeds of English toy dogs along with the native Russian toy breeds were used in the development of the breed. This breed almost became extinct during the war years. Fortunately some breed enthusiasts have managed to restore breed population. The Russian Toy Terrier has become a popular home companion in Russia.

This small elegant dog is very lively, eager to please, never shy and never known to be vicious. This even tempered breed is a most suitable home companion especially for senior citizens. This lovable dog would be the masters shadow and would want to participate in all the activities of the family. The Russian Toy Terrier may be very small but it has all the qualities of being a true companion. The only problem with having one in the family is that this dog is addicting. Once a Russian Toy Terrier managed to be ensconced in the hearts of the family you will not stop until you get another one.

The Russian Toy Terrier is a tiny but very elegant looking dog that is considered to be one of the most popular decorative breed in its country of origin. With an average feather light weight of 3 to 6 pounds and with a height of 8 to ten inches, this breed is considered to be one of the worlds smallest dogs. The dogs diminutive size should not give an impression of frailty. This is a hardy and agile breed. A Russian Toy Terrier is even deemed as a miniature Doberman. If they are seen being cuddled and carried by their owners it is because these sweet adorable dogs are a joy to hug.

Compared to the body, the dogs head is quite large. The lean muzzle is tiny but it is well defined. The muzzle tapers smoothly to a small nose that takes the color of the coat. Fairly large dark eyes are dark pigmented and set wide apart. The eyes are always lively and full of life. Thin big ears stand pricked high on the skull. The hair on the ears is what differentiates a smooth haired from a long haired Russian Toy Terrier. Ears of the long haired dog would be like butterfly wings as they are profusely fringed with long hair.

This breed has an elegantly arched neck. The small compact body is strong. The short back is straight, the slightly rounded loin is well muscled and the oval chest has well sprung ribs. Belly is moderately tucked up. Tail that is usually docked is carried high. If tail is left in its natural state, it is well covered with hair and elegantly carried above the topline in sickle fashion. This breed has two types of coats. Short haired dogs have short smooth hair that lies closely to the body. This type of Russian Toy Terrier has no undercoat. The body of the long haired variant is covered with hair that is about 3 to 5 cm in length. The hair can be straight or slightly wavy. The head is covered with shorter hair but the hairs on the ears are long and profuse.

The Russian Toy Terrier is the perfect companion for the whole family. This dog may not accompany the master on hunting trips but it will be a lively brisk walking companion. This is a versatile dog that would cater to the needs of its master. It will be a lively and energetic playmate of the children in the same manner that it will be an affectionate and loyal companion of the elderly. The Russian toy Terrier is a friendly breed and it enjoys human companionship. The dog is not only friendly to people but to other dogs and other pets as well. Owners have the tendency to spoil this lovable dog. However, it must be remembered that this is a canine and it must be treated as such otherwise the dog would develop a small dog syndrome. This dog would do well in an apartment as long as it is provided with its exercise needs. No matter how tempting it is to carry the dog, it should be allowed to walk. Dogs have a primal instinct to walk and the Russian Toy Terrier is no exception.

The two variants would have different grooming needs. The short haired type can be brushed at least once a week but the long haired variant would need daily brushing to avoid mat formation. Both types would benefit from a bath every month and both would need regular ear cleaning and nail clipping.

Dogs are much loved by the Russians. Dogs were considered as status symbols a sign of wealth. Old Russian aristocracy favors these animals. The family of the Russian Czar displays the pedigrees and certifications of their dogs. Owning popular breeds of hunting dogs and joining traditional hunts is a good opportunity to rub elbows with the Czars family. Ladies have to have a ladys dog as well. During the 17th and 18th centuries, toy dogs became a most valuable gift. Russian sailors would scour different countries in Europe to find the smallest and the most appealing small dogs. These Ladys dogs as they were called during those times are worth 10 times their weight in gold. A little dog is a most common feature in ladies portraits. In fact, the popular name for Russian portraits and other works of art during that period is The Lady with Dog.

The toy dogs as well as the other breeds of dogs were destroyed during the communist revolution in 1917. The dogs were considered as useless animals of spoiled capitalists. With the leadership of Lenin, the communists killed the dogs as they were consuming food while the poor working people are starving. A few toy terriers though were saved by surviving breed enthusiasts.

The Russian Toy Terrier is a fairly new breed of dog. This toy dog was only created in Russia in the middle of the 20th century. The English Toy Terrier was considered as the most popular toy breed in Russia at the beginning of the 20th century. However, because shipping of toy terriers was stopped from the 1920s to the 1950s, the dog population reached a critical level. Revival of the breed was started by Russian breeders in the mid 1950s. Because very few toy terrier breeds were left and many of which have no pedigrees, all dogs were used in the breeding program. This resulted to puppies that differ greatly from any established terrier standard. From these cross breeding the Russian Toy Terrier has evolved.

On October 12, 1958, a male puppy with an impressive beautiful fringe on the ears and limbs was born. The progenitors are both smooth haired although the sire has a slightly longer hair. The breeder decided to keep the remarkable characteristic of the dog. The male dog was again mated with a bitch that has a longer hair. The long haired variant of the Russian Toy Terrier was developed. Specific selection and planned breeding has developed the two variants of the Russian Toy Terrier- the long haired and the smooth haired.