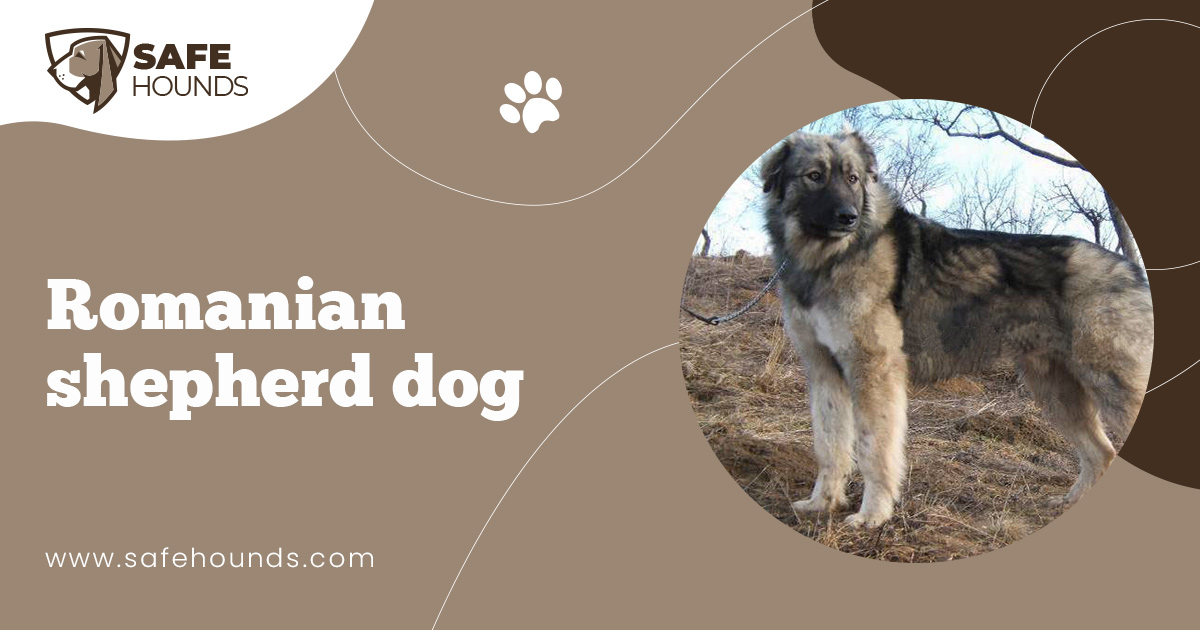 The Romanian Shepherd Dog and Dracula have one thing in common both came from Transylvania! Bram Stoker, the author of Dracula has chosen Transylvania as the setting of his novel. The Romanian Shepherd Dog also known as the Carpathian Shepherd dog was developed in the Carpathian mountain regions and in Transylvania. This rustic breed was used for centuries by Carpathian mountain shepherds to guard and protect the herd from wolves, bears and other predators. Romania is noted to have a high wolf population. A Romanian Shepherd Dog is a strong breed known for its ferociousness. The dog does not only ensure the safety of the flock from predators but also safeguards the property from marauders and thieves. In Romania it is a common practice to attach a piece of log to the collar of the dog. This is a symbol that notifies passersby that the dog is a ferocious one and that the dog is an owned property. The dog has a surly temper and very often threatens travelers. The log on the collar prevents the dog from being shot on sight by law.

A Ciobanesc Romanesc Carpatin (another name for the Romanian Shepherd Dog) remains pure in the isolated and higher elevations of the Carpathian mountains. Specimens of the breed existing near the Balkans farther south of Romania are bigger than the dogs in eastern Romania. These dog are smoother coated and most commonly dark and piebald in color. The difference in size can be attributed to the crosses made with the mastiffs and the pariah types of dogs found near the coast. Apart from herding these bigger dogs are utilized for carting and hauling. These flock guards of Romania are still extensively used in the remote areas of the country. This breed is unknown outside Romania as it has never found its way to the Western countries.

The Romanian Shepherd Dog is a large sized dog that has a vigorous and a powerful appearance. The breed has a rectangular body given that the body length is greater than the height measured at the withers. This breed has a well defined sexual dimorphism. Males are easily distinguishable from females as the former are taller and bigger than the latter. This breed is a mesocephalic (moderate headed) type. The head is powerful but not heavy. The dogs forehead is domed and narrows towards the stop. The truncated cone shaped muzzle is equal in length to that of the skull. A Romanian Shepherd Dog has a wide and large nose that is always black in color, tight and thick well pigmented lips and strong straight jaws. Strong teeth meet in a scissor bite. The dogs slightly sunken medium sized eyes are almond shaped and dark brown in color. Black pigmented eyelids tightly fit the eyeball. The rather small triangular ears have rounded tips. Set wide apart higher than the level of the eyes the ears are folded backwards and carried close to the cheeks.

This breed has a well knit and well muscled body, a firm straight topline, a solid, straight and well developed back and a roomy well developed chest deep enough to reach the level of the elbows. This dog has well sprung ribs and a tucked up belly. The set on high tail is bushy, abundantly covered with hair. When the dog is at rest the tail is carried low and saber-like, when the dog is alert and on the move the bushy tail is carried upwards, at times even higher than the topline but never curled at the dogs back. This breed had strong legs and large feet that allow the dog to do its herding job excellently. This breed has ash-gray skin pigmentation. This dog has an outer coat that is dense, straight and coarse to the touch and an undercoat that is thick and soft. The head is covered by a much shorter hair but the rest of the body especially the neck, tail, flanks and buttocks are profusely covered with long hair. Coat color varies. Some dogs would have sable coat with black heads others would be brindled, black and tan, wolf grey and some would have white marks.

For centuries the Romanian Sheep Dog has been the most valuable companion of Romanian shepherds. For centuries these rustic dogs have been protecting herds in the Carpathian Mountains against predators and rustlers. The ferociousness of this breed is legendary. During the ancient times owners would protect their dogs from being killed by fastening symbols of ownership on the collar of the dogs. The dog may exhibit a vicious character when protecting the herds but it is very docile and gentle to the people it considers as its family.

These dogs would show unconditional devotion and extreme protective instinct for the flocks. This is a calm, even tempered dog that forms a strong attachment to the master. Because of the balanced temperament, the dog is now a common sight in cities. The dog has adapted well to being house companions. People who have opted to keep this dog as pet have found a dependable guard dog as well as a gentle playmate of the children.

This dog is not suitable for apartment life. The dog is used to living with its flock. The all weather resistant coat makes sure that the dog can stay comfortably outdoors. Being working dogs Romanian Sheep Dogs would need vigorous daily exercise. A home with a yard would be a most suitable living arrangement for the breed.

This breed needs very little care. The weather resistant coat practically cleans itself. Occasional brushing will promote the good condition of the coat. Mud and dirt that clings to the coat would peel off when dried. Dogs should be bathed only when necessary as frequent bathing will remove the weather proofing of the coat. As with any other breeds of dogs, ear cleaning and nail trimming must be included in the grooming routine.

The Romanian Shepherd Dog calls Transylvania and the Carpathian mountain regions home. The Carpathian Shepherd Dog as the breed is also called is speculated to be the cousins of other European flock guardians. These means that all these dogs have descended from the dogs that came from the east. Similar to other ancient breeds of dogs, it is uncertain when the ancestors of this breed came to these regions. One thing is sure though, these dogs have existed for a very long time.

Romania is a county of abundant vegetation. About 20% of the countrys territories are meadows used as pasture lands for sheep. Bordering these pasture area are forests teeming with wild carnivores. Brown bear, lynx, wolves and other predators cause extensive damage to livestock. Wolves are considered to be the greatest enemies of the shepherds. Wolves in packs are well coordinated and organized. Each wolf would have a specific task to do when the pack attacks. Romanian herdsmen and peasant are in great need for a dog that will guard and protect the flock from these predators. These dogs would also guard the flock against sheep rustlers. The Romanian Shepherd Dog was selected from the breeds endemic to the Carpathian and Danube areas. These dogs were selected because of their efficiency in performing the given task, that of guarding and protecting the flock from predators. The dogs were selected because of their balanced temperaments. These dogs are so fierce and violent very much able to fight the wolves and the bears which are much bigger than their size but at the same time show gentleness and manifest protective instincts for the sheep. These dogs would love and protect the human family but would be very suspicious and wary of strangers. A Romanian Shepherd Dog would be aggressive and act at once if it deems the family and the property it is guarding is threatened. These dogs do not lead the herd but it would go wherever the herd would go alert and ready to protect the flock.