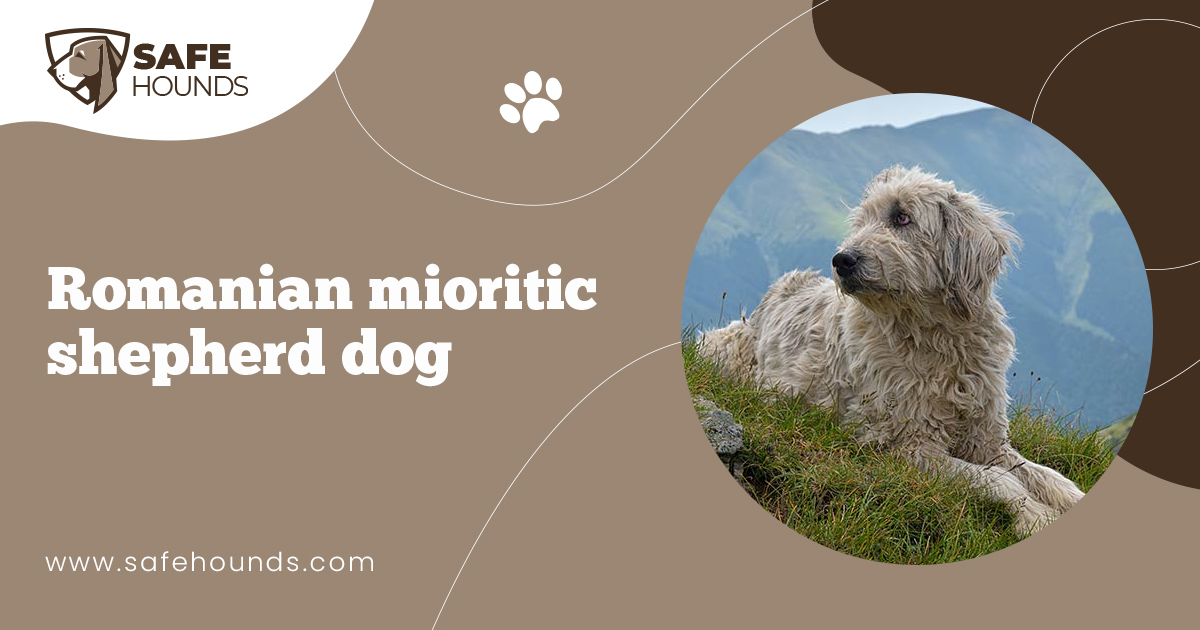 The Romanian Shepherd Dog is a breed of dog that originated in Romania. This breed was selected from the endemic breeds of dogs in the Carpathian Mountains. The Ciobanesc Romanesc Mioritic as the breed is otherwise known is a massive dog even made bigger by the attractive fluffy hair the gives the dog a giant teddy bear look. The white, pale grey or cream colored hair often fools the predators into thinking that the dog is one of the sheep. The wolves, bears and lynx will be taken by surprise when a lying Romanian Mioritic Sheperd Dog would suddenly sprint and accost the predator. Aside from the eye-catching appearance this dog is really valued because of its main role of protecting and guarding the herd from predators as well as protecting the owners property from thieves.

In spite of the massive size the dog is extremely agile. This dog is really fast, well able to surprise the enemies with precise and lithe movements. This dog doesnt seem to have a fearful bone in its body. A Mioritic would seem to be a harmless fur ball but the dog will courageously face an attacker even one that is several times bigger than its size with no apparent concern. At the precise moment the dog would lunge and strike at the exposed belly of the predator.

This dog has an all weather coat that enables the dog to adapt to any kind of habitat. The coat protects the dog from extreme heat or cold. An unprotected man may be killed in seconds in a freezing temperature, not a Romanian Mioritic Shepherd Dog as the dog loves cold weather so much. The dog would opt to sleep in the snow even if a shelter is provided. As with any other kind of guard dog, the Romanian Mioritic Shepherd Dog is not for a first time dog owner. This dog is headstrong and would need a firm owner who will have to show the dog its rightful place or rank in the family, otherwise the dog would develop into an obstinate one. It would certainly be difficult to control a dog that is over 100 pounds.

A Romanian Mioritic Shepherd Dog is a massive dog that is made even bigger by a long and fluffy coat that grows abundantly. Coat color is basically white though some dogs are light cream or pale grey coated. Others would have predominant white hairs and patches of cream and pale grey. This breed has a double coat – a top coat that is rough (similar to a sheeps wool in texture) long and slightly wavy, often growing from 3 to 6 inches in length and a waterproof undercoat that is very dense, soft and smooth. A single litter can have pure white puppies and grey and white puppies. The double coat covers the entire body of the dog except for the eyes and the nose.

It would be quite difficult to discern the features of the dog because of the thick fluffy hair. However, it is apparent that the dog has a massive head and a broad and rather arched skull. This breeds black nose is broad and well developed. Ears that are not too large are triangle in shape. Ears are set on high and hangs on both sides of the head. Medium sized eyes are slightly oval in shape. Eyes are amber or hazel in color. Eyes are covered with the fringe of the eyebrows and rarely visible.

A Romanian Mioritic Shepherd Dog stands about 27 inches measured at the shoulders and weighs between 100 and 150 pounds. This dog has a rectangular body. The legs may appear short because the abdomen and chest are thickly covered with long hair. Forelegs and hind legs however are well boned and strong. The paws are thick and wide to enable the dog to cross snow covered terrain. The set on high tail blend with the fur of the body and often gets unnoticed. At rest the tail hangs down reaching the hocks with a lightly curved tip. When the dog is on the move the tail is carried high level with the back but never bent over the topline.

The Romanian Mioritic Shephers dog has been used for centuries by Carpathian herdsmen because of the dogs outstanding abilities to guard and protect the sheep from predators, be it of the four legged or the two legged kind. The dog is most noted for its ferociousness and dedication to defend the flock entrusted to his care. This breed is incorruptible, vigilant and very well disciplined one that is known to follow and obey the instructions and commands of the master very well. This is probably the reason why a Mioritic is also a very dependable house pet. These dogs have an inherent urge to protect its human family. The dog may be very loyal and docile with the family but it is know to be wary of strangers.

A Mioritic loves children. This dog would enjoy to be made a part of the childrens activities. It will get along well with other dogs and animals in the household especially if they are socialized well. A male Mioritic however will be protective of its territory and it would not be surprising if the dog shows an aggressive behavior to another male dog in the yard.

This breed is not for apartment living. The dog would need at least a yard where it can run and play. Because these dogs are extremely energetic with huge amounts of endurance and power, they would need enough space where they can run freely. These dogs are not meant to live indoors. A prospective owner should be one living in the country or in a home with a large yard. With a large yard the dog can exercise on its own. But as the dog is wary of strangers the yard must be secured with a fence.

A Romanian Mioritic Shepherd Dog does not need extensive maintenance. Although quite long and thick, the coat would not be hard to maintain. However, a puppy would require an extensive maintenance. The coat must be brushed for at least 10 minutes everyday. This is to keep the coat clean and to prevent tangles from forming. As the dog gets older less grooming will be required. Brushing the coat every few days would be sufficient to maintain its tiptop condition. Avoid bathing the dog too often as it would remove the waterproofing of the coat. The dogs coat would take more than a day to dry. So of you do bathe the dog you have to use a hair dryer or bathing should be done when the temperature is really hot.

The Romanian Mioritic Shepherd Dog is an ancient breed of dog that has naturally spread all over the Romanian territories. It was believed that the progenitor if this breed are the moloss dogs that were brought by the Roman legions when they passed and crossed through Romanian territory during the Roman Empire migration. These dogs have legendary ferociousness, courage and strength. In fact during the Middle Ages, Miorotic dogs were used in the armies of medieval kings. Ancestors of these dogs were used to fight the invading Romans. Thousands of years ago, these dogs are most commonly known as the Romanian Baracul. These dogs have helped the people of Dacia fight the Romans. The valiant efforts of the dogs were immortalized in the Emperor Trajans Roman column. This historical monument in Rome shows the engraved images of fighting Romans and Dacs. The Dacs are being helped by the Carpathian Mioritic Dogs.

The Romanian Mioritic Shepherd Dog was most valued by Carpathian herdsmen. These dogs are used in hunting but the primary utilization of these dogs is to protect and guard the flocks against predators as well as to protect the property of the shepherd against thieves. Miorita, the famous Romanian poem ballad has mentioned these exceptional dogs.

Presently, Romania has the most number of wolves, bears and lynxes all over Europe. You can imagine how the herdsmen during the ancient times would fare without the help of the Romanian Mioritic Shepherd Dogs as these predators would have existed in even bigger numbers during those times. Aside from guarding the flock these dogs are noted for their prowess in hunting game that is much bigger than their size. The Mioritic is known to be a more ferocious hunter that its cousin the Romanian Carpatin Shepherd Dog.

These days the Mioritic is widely utilized as a hunter as well as in herding and protecting flocks and properties in Romania. This dog has evolved into a wonderful home companion. However this breed is not known outside its country of origin. This natural breeds standard was made by the Romanian Kennel Club in 1981. In 2005, the breed was officially recognized by FCI.