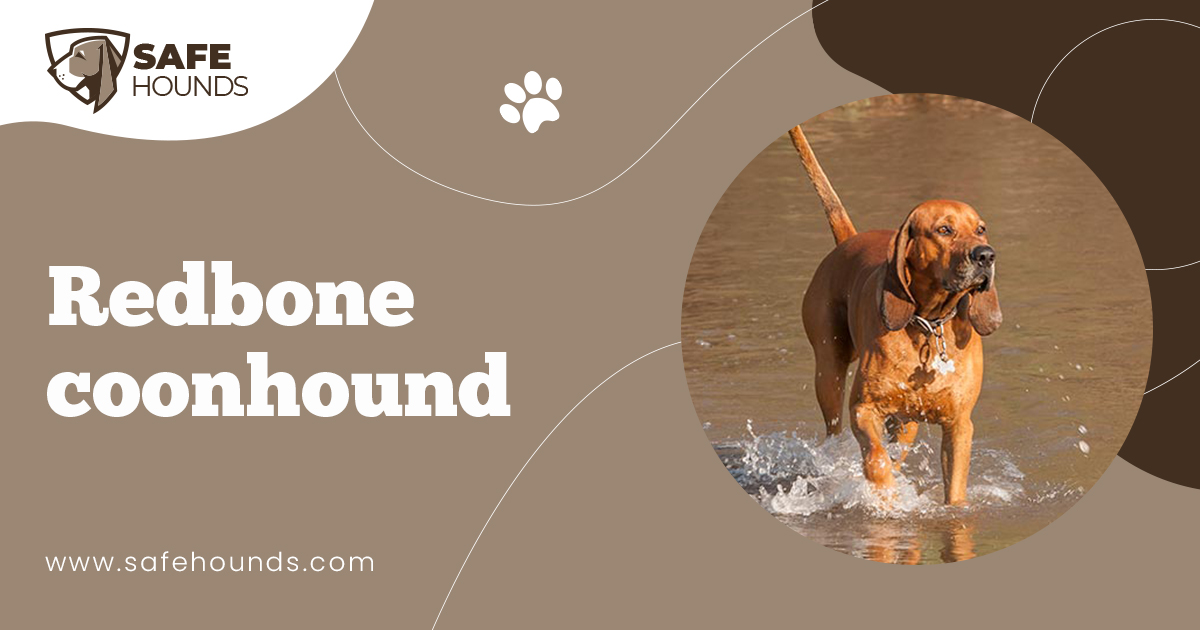 The Redbone Coonhound is a dog that has been bred to hunt raccoon. In some areas, they are also used to hunt bobcat, cougar, and even bear. This breed is vey agile and that helps them to be used for hunting in a wide variety of areas, such as mountains, swamplands, and even the water. The Redbone Coon hound is the only coonhound that is solid colored.

The Redbone Coonhound is recognized by the UKC, AKC, CKC, NKC, APRI, and ACR. They make good watchdogs and will alert you when you have visitors. However, they do not usually make a good guard dog.

The Redbone Coonhound is a well balanced and swift dog. This holds true even on the most difficult terrain. This dog has an excellent cold nose and a flashy red coat. They have what has been described as a handsome look and they have a confidence about them. Without question, they have excellent hunting skills.

The Redbone Coonhound is a beautiful dog with a muscular body and long floppy ears that are known to reach all the way down to its nose. They have webbed feet that are equipped for swimming, which is a sport they enjoy. At one point, this dog was bred for looks only. They are happy dogs with a pleasing voice. They are very specialized in tracking prey and have very good scenting abilities that have been obtained from the bloodhound.

The Redbone Coonhound is friendly at home. If they are raised around the home, then they make excellent house pets. Some drool quite significantly. This breed gets along well with other dogs and children, as they are gentle and docile.

The Redbone Coon hound is an even tempered breed that is very happy and good around children. This dog is quite affectionate and has a bark that is pleasant sounding. They really enjoy being around their owner and family. If the Redbone Coonhound is raised indoors as a puppy, it will adapt easily to life with the family. The Redbone has a strong natural desire to please its owner. They are quick, alert, and able to work across a wide variety of terrains. The agility of this breed is a real advantage when they are tracking in uneven territory. It is very easy to train the Redbone Coonhound to follow and track prey.

The Redbone Coonhound needs an extensive amount of physical exercise. They have a very high level of endurance. Each day they should be taken on a walk or jog. It is recommended to keep these dogs in a well fenced area when they are exercising on their own. This is because they have very strong hunting instincts and they have a tendency to run away in search of prey.

The Redbone Coonhound is an American breed that was developed in the state of Georgia in the 1800s. They were bred from bloodhounds and foxhounds. According to reports, the name Redbone Coonhound came from Peter Redbone of Tennessee, who was a dog breeder. Other breeders who were well known among lovers of this breed are Georgia F,L. Birdsong from Georgia and Dr. Thomas Henry in the 19th century. Breeders intentionally bred the Redbone Coonhound to be faster than other coonhounds. They were also bred to have a more developed sense of smell. They have excellent qualities that make them very valuable for pack hunting. In the very beginning, the Redbone Coonhound had a black saddleback. However, by the beginning of the 1900s, the color was a pure red tone. That is the color they are today.

In literature, the most well know Redbone Coonhounds were Old Dan and Little Ann. They were featured in the classic childrens story Where the Red Fern Grows.

Many years ago, if a coon hunter owned a red dog of unknown ancestry, they would refer to this dog as a redbone if the dog had a good ability to track raccoons. Later, breeders began to selectively breed these dogs to produce a superior coonhound with superior tracking capabilities. This select breed would be the same in conformation and color. Breeders in the states of Georgia and Tennessee wanted a hound that was faster and a better scent tracker than the existing coonhounds. The first dogs as a result of this were called saddlebacks. The background color of the saddleback was red and the majority of them had black saddle markings. Over time and through selective breeding, the black saddle markings were bred out. The solid red dogs became known as the Redbone Coonhounds. Foxhounds are the ancestors of the Redbone Coonhound. Reportedly, a Bloodhound cross was made and this accounted for the white chest and feet markings, which show up on occasion in Redbone puppies today. This mixture makes the Redbone Coonhound a vey good hunting dog. Primarily, they are used in treeing coon but they can be adapted to other game.