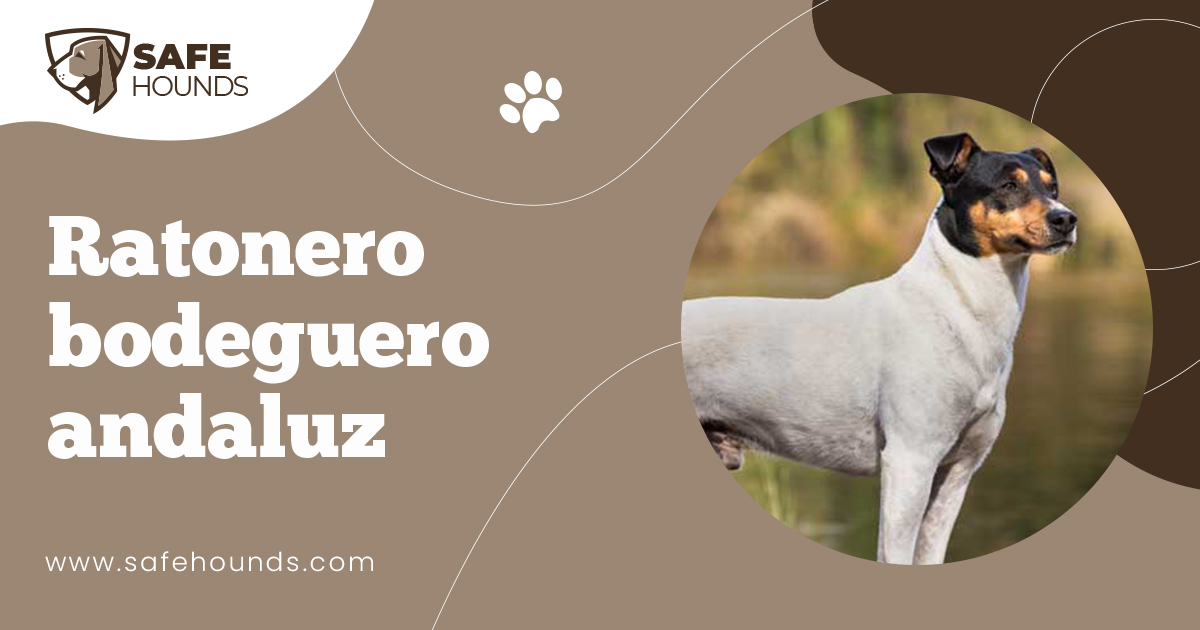 The Ratonero Bodeguero Andaluz is a terrier type of dog that was developed in Andalusia, Spain. As the name suggests this breed was specifically created to eradicate rats and mice from wine cellars. Terriers are commonly utilized to reduce mice and rat population from ports, warehouses, stables, farms and houses. These dogs are even taken aboard ships to control rats and mice. The Ratonero Bodeguero Andaluz would essentially perform these tasks too but the breed name specifically suggests the utilization the breed was primarily developed for. This type of terrier was created to hunt mice and rats in bodega where wine barrels are stored. Bodega is the Spanish word for wine cellar and rata is for rats. Ratonero Bodeguero Andaluz means Wine Cellar Rat Hunting Dog of Andalusia.

This breed that was considered as wine cellar guardian was developed in the late 18th and early 19th centuries. Smooth coated Fox Terriers brought by British wine merchants were crossed with native Spanish terriers commonly called Ratero Andaluz. A medium sized ratter was developed from this crossing. The breed closely resembles a Jack Russel Terrier in fact the dog was at times referred to as Spanish Jack Russel Terrier. The Ratonero Bodeguero Andaluz has a predominantly white coat that is very short and covers the body surface in uniform length. The dog is commonly seen with a brown, tan or black mask.

Similar to other breeds of terriers, the Ratonero Bodeguero Andaluz has an inherent drive to kill rats and mice. However, this breed is a mean enemy of rabbits, hares, badgers and other small game as well. This agile and strong dog would exhibit a restless and nervous energy. The lightweight body makes the dog extremely fast. At the slightest sound and rustling, the dog would turn and jump in a well coordinated movement to run after its prey. The breed is still performing its original job, an RAB is constantly alert and forever ready to run after rodents. Due to its affectionate nature, gentle temperament and adaptability to any situation, the Ratonero Bodeguero Andaluz makes the quality of peoples lives so much better truly a wonderful addition to any home.

The Ratonero Bodeguero Andaluz is a small to medium sized breed. The height and the length typically give the dog a square shaped build although females tend to have a slightly elongated body. The skull is flat. The small triangular shaped head is well balanced but gives the dog a rather delicate appearance. The muzzle is long, the nasal bridge straight. The smooth stop is not too pronounced. The nose of this breed is black. Obliquely set, small, dark brown eyes are slightly prominent and have an intelligent and alert expression. Cheeks are well filled. High set triangular ears are broad at the base and bent forward at the tip. Strong jaws enclose complete dentition that meet in a scissor bite. Long muscular neck is without dewlap.

The Ratonero Bodeguero Andaluz is an athletic breed. Males measure from 14.6 to 16.9 inches at the withers. Females are generally smaller and stand from 13.75 to 16.1 inches. This breed has to follow its prey in burrows thus the ideal height for male is about 15.75 inches and 15 inches for females. The dog has a compact and slender body. The long back is straight. Loin is short but muscular. The broad strongly muscled has slightly arched ribs. Belly is slightly tucked up. High set tail is carried erect. A Ratonero Bodeguero Andaluz may be born with a bob tail. Natural tails are commonly docked to a quarter of its natural length. This ratter has a short smooth dense coat. This breed has a typically white body and a tricolored (black, tan and white) mask. The dogs generally have tan eyebrows that give the dog a four eyed appearance.

A Ratonero Bodeguero Andaluz is first and foremost a ratter. The dog is lively and friendly. It also has an affectionate nature but because of its high prey drive, the dog can be stubborn and ignore the call of the master once it hears faint rustling sound or sees slight movements. Hunting rodents is the main hobby of this breed. The second is playing with children. The dog loves children so much so that it can be the shadow of its little master. However, the master has to manifest a firm and confident behavior and be the leader of the pack. Allowed to have its own way, the dog can develop behavior problems. This breed will tolerate other dogs but it can be very dangerous to smaller pets. A Ratonero Bodeguero Andaluz has the typical active and high strung temperament of a terrier. The dog can easily adapt to any environment and situation. The dog would thrive well in the wide open spaces of a home in the country in the same manner that it will be happy to live in an apartment in the city. City bound dogs however, will need to be provided with regular opportunities to exercise.

A Ratonero Bodeguero Andaluz is a low maintenance breed not only because of its size and short coat but also because this is a clean breed. Good nutrition and minimal grooming will ensure the good condition of the coat. This breed is an average shedder. A firm bristle brush occasionally used on the coat will remove dead hair. However, being a ratter, the dog has the tendency to be bitten by rats. Rat bites must be thoroughly cleaned. Apply antiseptic on the swollen and affected area to avoid infection.

Rat terriers were developed around 1800s in Great Britain. Using rat terriers is a very effective way of eradicating vermin from stables, barns, warehouses and homes. Generally, these rat hunters are small dogs that are about 14 to 20 inches in height and possess a small and compact but strong body that is ideal for rat hunting. These strong jawed dogs have extremely fast and agile movements. The Smooth Fox Terrier is one of the top notch breeds of hunting terriers in Great Britain. This breed is the progenitor of the Ratonero Bodeguero Andaluz, a breed of ratter used in the wine cellars in Andalusia, Spain.

The Ratonero Bodeguero Andaluz is also known as Andalusian Mouse Hunting Dog, Bodeguero Jerezano, Perro Rotonero Bodeguero Andaluz, Cazarratas, Perro Cuadras, Perillo Ratonero, Ratonero Andaluz. All these names specifically point to the utilization the breed was particularly developed for. In the late 18th century, British wine businessmen settling in the Jerez countryside for the Sherry making industry have brought with them rat terriers from England to control rat population in vineyards and to hunt rats hiding between Sherry barrels in wine cellars. The same breed of ratters was brought by miners to this region south of Spain. These ratters were crossed with Raterillo Andaluz, a breed of Spanish terrier. The crossing resulted to the development of the Ratonero Bodeguero Andaluz. Although already established in the early 1900s, the Toy Terrier was later introduced to the breed. Selective breeding has established a breed of medium stature with a predominantly short white coated body and a three colored face mask. The breed has folded ears and very dark eyes.

The breed has existed in the Andalusian region for years. This ratter is considered to be a purebred but no efforts were made to have the breed recognized. In October 1993, Bartolome Benetiz Perez Luna has founded the Club Nacional del Perro Andaluz Ratonero Bodeguero. It was also during this time that the first breed standard was written. In September 21, 2000, the breed gained national recognition when the Spanish Ministry of Agriculture and the Real Sociedad de Canina de Espana (Spanish Purebred Royal Association) proclaimed the RBA to be a native Spanish breed. Although accepted by numerous dog registries and recognized by minor kennel clubs, the Ratonero Bodeguero Andaluz is as yet unrecognized by the Federation Cynologique Internationale.

The Ratonero Bodeguero Andaluz has performed the functions it was specifically developed for. However, the dog has not only been the worst nightmare of rats and mice. With a high prey drive, the dog has also hunted and drawn badgers and foxes from their burrows. Because of the friendly and lively temperament, the breed has become a welcomed addition to the family.