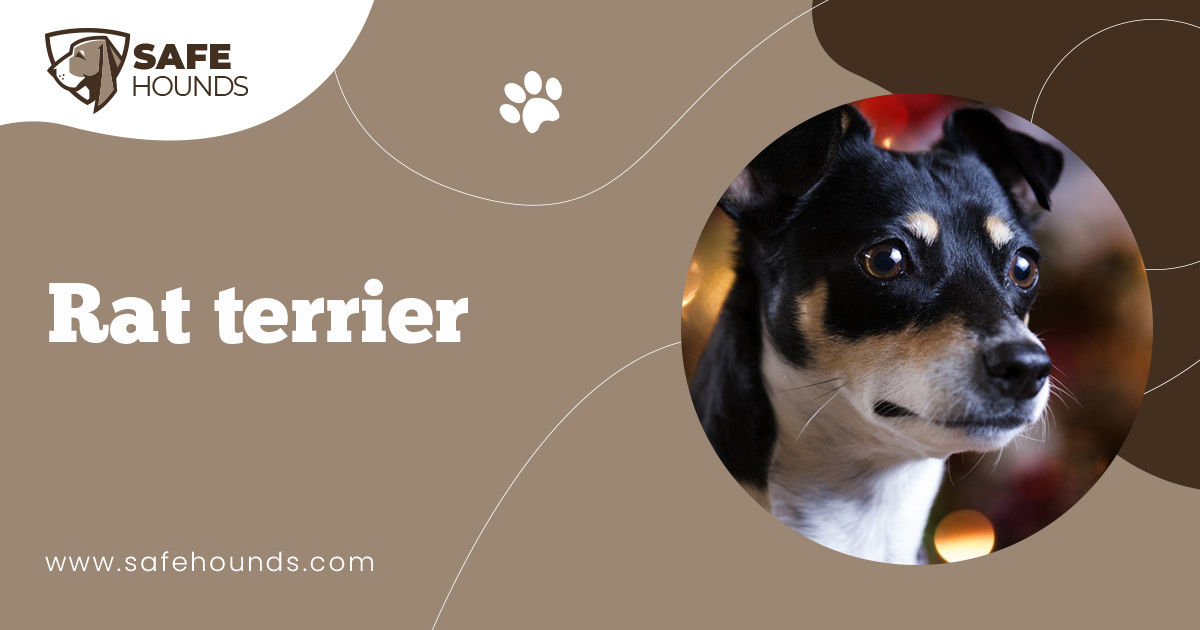 A dog that hold the impressive record of killing 2501 rats in 7 hours, another dog is noted for eradicating rats from the White House, Buttons, the little dog that was trained by Eleanor Powel to do a tap dance scene in the 1941 MGM musical filmall these dogs with extraordinary abilities are Rat Terriers.

A Rat Terrier is a dog that originates from the United States. The dog is also known as the American Rat Terrier, Feist, Rattling Terrier and Decker Giant. These dogs have a compact well muscled body and a rather small head. The name Rat Terrier was given to the breed as these dogs were noted for their ability to excel in rat pit gambling. Centuries ago, dogs are let loose in a pit with rats. Dogs that kill the most number of rats within the preset time wins. Aside from controlling vermin, Rat Terriers hunt squirrels, rabbits and other small game.

Present day Rat Terrier would still hunt the occasional rat but these breed is most prized for their loyalty and for being an excellent companion. These dogs are naturally lively and inquisitive. This is one type of dog that thinks it is human. A Rat Terrier with a cocked head would look at you with different facial expressions, at times the dog would seem to implore, other times the dog would have comical look on its facealways trying to please the master. If you are getting a Rat Terrier pet be prepared to have a shadow as the dog would be by your side at your slightest movement. Rat Terriers are wonderful pets for the energetic owner as well as for the elderly. The dog would be content to lie on the lap or at the foot of an elderly as long as it is given a few minutes to run outside to use up their excess energies. These dogs are also suitable pets for an energetic owner who would spend a lot of time outdoors. The dog will be a constant companion, both as a dedicated friend and an untiring worker. Rat Terriers would be happy in a farm or in a yard more so if the dog is given a task to do.

A Rat Terrier however is a dog that has the propensity to be in less than ideal circumstances. Because of its inquisitive nature the dog often finds itself stuck in a hole and up in ladders and trees. A Rat Terrier is not a yappy dog but when this happens the dog would surely raise the roof, asking to be rescued.

Rat Terriers are muscular dogs that comes in four sizes: the Toy which weighs up to 8 pounds, the Miniature Rat Terriers which are about 15 pounds, the 25 pounders are called the Standard and the Decker Giant that weighs up to 45 pounds. This breed has a beautiful thick, smooth and shiny coat that comes in black, brown, blue, charcoal, liver chocolate, red, lemon, fawn and apricot. Generally, the dogs are white with piebald or tricolored spotting. Some dogs are brindled, merle or ticked.

The dog has a slightly domed skull. A medium length slightly tapering muzzle and well developed cheeks. Wide set prominent eyes may be round or almond shaped dark brown or light hazel in color. Nose may be black or may be pigmented with the same color as the eyes and the eye lids. The jaws are strong and sufficiently hinged back to catch and carry prey easily. Tight lips enclose evenly spaced teeth that meet in a level or scissors bite. The dogs V-shaped ears may be buttoned, pricked or semi pricked. The ears are carried upright when the dog is alert or in motion.

The dog has a compact and well muscled body. The moderately long neck is muscular, slightly arching at the crest and gradually widening from the base of the skull. Oval shaped chest is moderately deep and well ribbed. The tail is traditionally docked to 2 – 3 inches but present breeders prefer undocked tails.

Rat Terriers are people dogs, they crave and thrive on human attention. Usually sensitive and intuitive, these dogs would anticipate the owners every movement always anxious to please, would somehow know the masters mood and try to be comforting or amusing. These dogs especially puppies would demand constant attention. Rat Terrier puppies are playful dogs and would remain playful and active for the rest of their life.

Sociable and playful by nature, the dog makes good playmates for children. Some dogs would be wary of children especially if they are not raised with them but most Rat Terriers are patient and tolerant with kids. They would be in 7th dog heaven if the kids shower them with attention. Most of these dogs can even be seen sleeping with the kids. However, if there are sweet natured Rat Terriers there are also aggressive Rat Terriers that will return pain if pain is inflicted on them. Clumsiness of the kids that caused the ear of the dog to be pulled, the paw to be trodden may cause the dog to react aggressively.

A Rat Terrier is not a dog aggressive breed. They live peacefully with other dogs although some fights may ensue over food. Generally, the dog would consider other smaller pets as a part of the family especially if they were raised together. However since these dogs are hunters by nature, they would chase the neighbors cats, hamsters, and any other swift moving small animals. Once the chase is on, the dog would climb trees and scale a fence.

Rat Terriers are generally friendly. These dogs are not barkers but they can be very vocal if they see an intruder and sense a threat to the family. These dogs are highly territorial and would guard the owner as well as the properties very efficiently. As mentioned before, these dogs are social and when they saw that the owner accepts and approves the stranger they would be friendly too.

These dogs can live in an apartment provided they are given the chance to exercise. A Rat Terrier would require a 30 minute exercise daily. These dogs would be excellent companions in jogging, hiking or a leisurely stroll in the park. This may be high energy dogs but they are known to have a quiet time indoors once in a while. These are intelligent dogs that should be given constant mental stimulation. This dog would need to be given the opportunity to use their minds otherwise the pet can get bored. Boredom is expressed by incessant barking and destructive chewing.

A Rat Terrier is a joy to own. This is a very affectionate dog that would enjoy to be constantly snuggled. The dogs would use their paws, grumble and mumble when ignored. Some owners would attest to the fact that a Rat Terrier is addicting and once you have one in your home be prepared to be owned by the dog.

Rat Terriers are short haired dogs that shed a lot. The dog sheds heavily in spring and fall and also during the heat cycle. After whelping the dog shed a lot too. During these times the coat must be frequently brushed with a rubber curry mitt or a soft brush to remove dead hair. Some owners vacuum the hair for about 15 seconds. This removes dead hair more effectively.

The dog may be bathed occasionally but ensure that it is thoroughly rinsed. Nails would need to be trimmed regularly. Be careful of using dog cologne for this breed. Rat Terriers are known to have allergies. Bluing the fur or conditioning often results to rashes and itchiness.

The Rat Terrier is an all American breed that was developed when the early immigrants cross breed the Fox Terrier with the Old English White Terrier, the Bull Terrier, the Manchester Terrier and other European terriers common during that time. The dog that resulted is most prized for its agile movements that made it an excellent hunter of small game. Aside from being hunters, these dogs were developed to be farm and ranch guard dogs. During that time, the Rat Terrier is a pretty ordinary dog but because of the Jack Rabbits pestilence, the farmers thought of solving their problem by creating a dog that will be able to eradicate the rabbits and other vermin. The Rat Terrier that is already known for its agility and speed was cross breed with Whippets, Italian Greyhound and other breeds also known for their speed and agility for the purpose of enhancing the speed and versatility of the Rat Terrier. Some Rat Terrier owners bred the dog with the Beagle which is known for its strong prey drive. The result is the present day Rat Terrier, a shrewd and excellent hunter with an energetic and happy disposition.

From 1910 to the 1940s, the dog became so popular. It was even featured in several movies. The poison control for vermin and the mechanized farming contributed to the decline of the breed. In 1950s one a handful of Rat Terriers exists. Fortunately, interest for the breed was revived in the late 70s. The Rat Terrier has gained recognition not only as a ratter but also as an excellent and loyal companion.