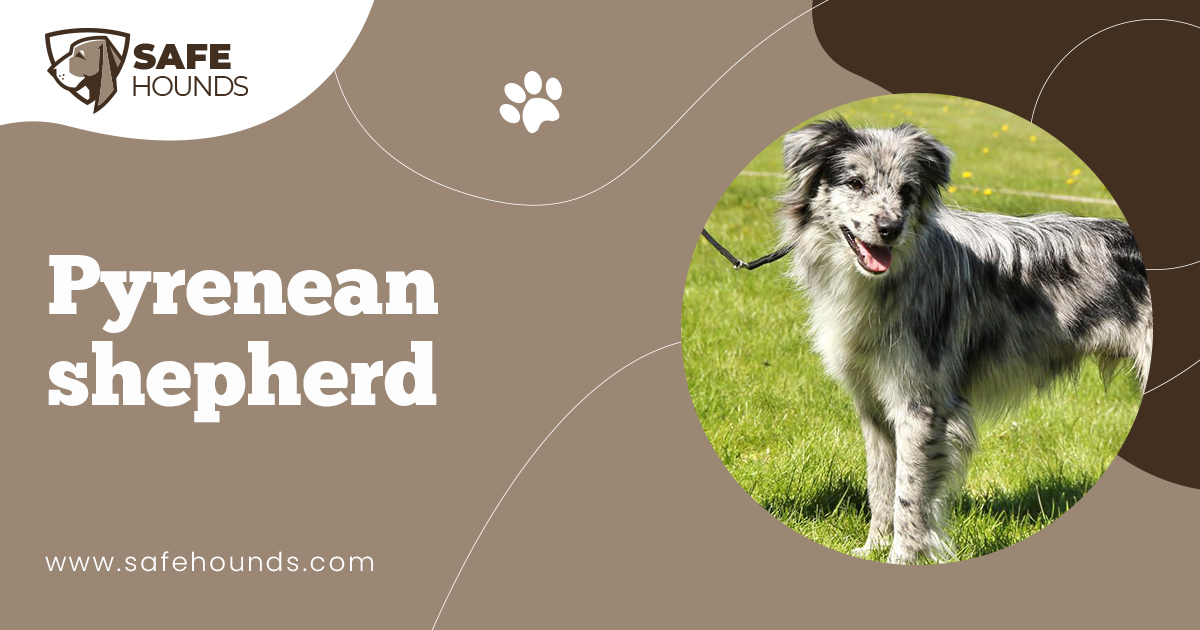 The Pyrenean Shepherd is a small and lean dog. They are described as lively with an outgoing personality and high intelligence. They have a unique triangular head and what some have called a windswept face. The Pyrenean Shepherd is very alert and ready for action. As a general rule, they have a natural distrust of strangers. When they are socialized from a young age, this breed has a very lively and cheerful disposition. There are two varieties of this breed. Once is the smooth faced and the other is rough faced. Both varieties are born in the same litters.

Usually, the head is triangular in shape. The head is small in proportion to the size of the dog. The top skull is almost flat. The eyes are open, very expressive, and almond shaped. They are not deeply set or prominent. The eyes are dark brown in color.

The ears of the Pyrenean can be either cropped or uncropped. The ears are quite short and are moderately wide at the base.

The nose of the Pyrenean Shepherd has a black nose. Any color other than black is a disqualifier. The lips of this breed are described as tight fitting, which gives the dog the appearance of smiling. Its teeth are strong and large.

The Pyrenean Shepherd is not simply a drover or herder. This breed is very versatile as a herder and has the intelligence to adapt to various circumstances in order to help the shepherd it works with. The herding instinct in this breed is so strong that as a young dog, it can herd animals without help from an older dog. This dog really loves its work. The Pyrenean Shepherd is known to become very attached to his owner and will exclude all others. This breed is very active and wants to be involved in the days activities at all times. He is quite distrustful of strangers but very friendly with members of his own family.

The Pyrenean comes in two varieties. One is the smooth faced and other is the rough faced. From simply looking at the coat of this breed, it appears this breed would require much maintenance. However, this is not the case. If the coat of the dog has a proper texture, it is quite easy to maintain and it stays very clean. All that is really required is a quick brushing once very few weeks. It is important to remember to trim the claws on the back leg of the Pyrenean Shepherd or they will grow quite long and this can cause an injury

The Pyrenean Shepherd has lived in the Pyrenees Mountains in southern France for as long as people can remember. The true origin of this breed is not firmly established. There are various myths that have been passed down over the generations. Some have claimed the breed descended from native Pyrenean foxes and bear. Others claim the Pyrenean Shepherd dog was the original dog of the Cro Magnon people. It is reported that bones of small dogs are found in Neolithic fossil deposits. Also, according to some reports, goat and sheep herding was so well established in the Pyrenees, that by 6000 B.C., the entire ecology of the area had been completely transformed because of overgrazing. For centuries, herding has been a very important part of the economy in the High Pyrenees. This ancient lifestyle has continued into modern times. Many Pyreneans Shepherd dogs continue to herd sheep today in the Pyrenees Mountains.

Medieval accounts report that the Pyrenean Shepherd was constant companions of its shepherd. Where ever the shepherd went, the dog went also. As the early modern period began, you could see depictions of this breed in lithographs, paintings, and engravings. Some of the noteworthy early modern depictions include Descmaps Le retour du berger, Buffons Histoire Naturelle, and Dartiguenaves Costumes des Pyrenees. It is reported among residents of the High Pyrenees that when the Virgin Mary appeared to a young shepherdess in 1858 at Lourdes, this shepherdess had a small Pyrenean Shepherd dog by her side. Pictures and other representations of his breed dating back to the 18th century display the same ear crop that is still present today in the breed.

Some Pyrenean Shepherds came to North America in the nineteenth century. They accompanied flocks of sheep imported from the Pyrenees Mountains. This breed was instrumental in founding the Australian Shepherd. They are primarily smooth faced blue merles. In the 1930s, the founder of the Great Pyrenees in the USA imported four Pyrenean Shepherd dogs. One was Houzard de Fontanettes from the M. Senac-Legranges kennel. However, they did not breed them.

Later, in the 1970s, a great Pyrenees breeder from Washington, imported a breeding pair of Pyrenean Shepherd dogs from a kennel in France called Estaube. These puppies introduced many Americans to this unusual French sheep dog.