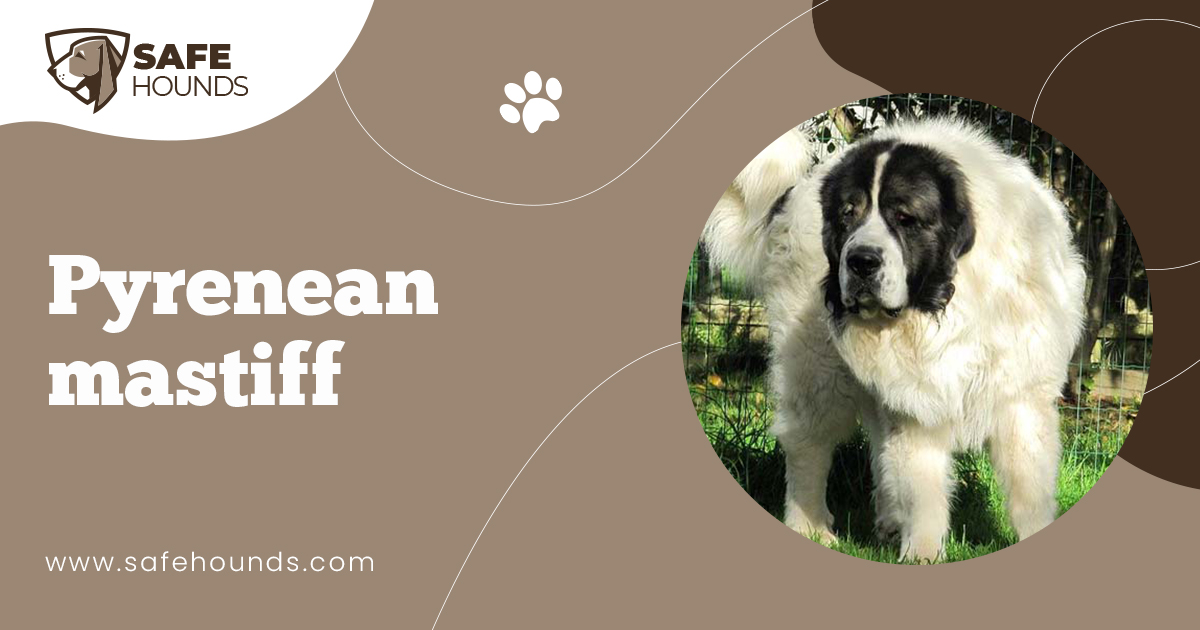 A very large rectangular dog with a massive broad head and very wide breast, one with an impressive thick white coat with golden markings will never fail to grab attention but what is most noticeable is the carlanca around the powerful dewlapped neck the dog is a Pyrenean Mastiff of bygone days! Modern day Pyrenean Mastiffs no longer need to wear the carlanca, a special iron collar with protruding spikes used to defend the dog against the attacks of wolves and bears. Originally utilized to guard and defend the flock against beasts of prey, these dogs are most commonly seen accompanying herds of sheep being transferred from winter feeding confinement to summer grazing land. The dogs massive appearance, its thunderous bark not to mention its formidable strength would discourage thieves and intimidate wolves and bears from harming the flock. The Pyrenean Mastiff is a most sought after breed especially by the Sheep and Herd Federation of Spain because of the dogs superb ability to protect the flocks of sheep. In recent years the dog has evolved into a dependable guard dog and a wonderful home companion. The dog makes an excellent protector of the family. No one should dare to challenge the temperament of this breed. A Pyrenean Mastiff knows its strength and capabilities. Never one to show off, the breed would be calm and docile, very friendly and at times would seem to be indifferent to what is going on around him. The dog may not have the hair trigger temperament of other guardian breeds but once it perceived a slightest threat to the family, property or flock under its protection the dog would move with alacrity and show its formidable strength and ferociousness.

The Pyrenean Mastiff is often confused with the Spanish Mastiff though the similarity of the breeds ends in having originated from the same country, Spain. The Spanish Mastiffs coat is shorter, the head slightly bigger and the neck has more loose skin. The Pyrenean Mastiff is also compared to the Frenchs Pyrenean Mountain Dog although it is clearly evident that the Great Pyrenees profuse coat stands out from the body and that the dog has a more graceful and elegant head.

This large breed matures slowly, often taking two years or more to reach full maturity. A Pyrenean Mastiff is not easy to breed. Moreover, the large bodied bitch is clumsy and often tramples the young. This breed has a life expectancy of 8 to 13 years.

The Pyrenean Mastiff is a breed of molosser. As with any other molosser breeds the size and the structure of the dog is considered to be one of the desirable qualities that are given much importance. This dog may have a massive conformation but it has an elegant appearance and the dog does not give the impression of being heavy. A Pyrenean Mastiff is in fact light on its feet. The dog hardly leaves any footprints because of its light steps. This breed has a large strong and rather long head. The broad sturdy skull is slightly convex. The slightly triangular muzzle tapers gradually to a large, broad, black and moist nose. Strong white teeth meet in a scissor bite. Small dark eyes are almond in shape. The eyelids just like the lips are black pigmented. Set on well above the line of the eyes, the medium sized triangular ears hang close to the cheeks. The neck takes the shape of a blunt cone. Broad and muscular with loose thick skin that forms double dewlaps.

A Pyrenean Mastiff has a rectangular body that shows extreme strength. It is strong boned and well muscled. The back is strong and muscular, the long loin is broad and the broad deep chest has rounded rib cage. Ribs are widely spaced apart. The belly is moderately tucked up. This breed has strong well muscled fore and hindquarters. Forefeet have well arched splayed toes with webbing in between. Some specimens may have double claws. The webbed toes and the dewclaws provide additional support not unlike a snow shoe when the dog ploughs through deep snow. A Pyrenean Mastiff has a thick, elastic pink tinged skin. The thick hair is rather coarse to the touch. Hair on the body is about 6 to 9 cm long. On the neck, shoulders, and backsides of the legs as well as on the tail, the hair is longer. The coat is bristly all over except on the plume of the tail. The beautifully plumed tail hangs low when the dog is at rest and carried in saber form with a hooked tip when the dog is alert. White is the predominant coat color. The coat can have golden, black, or shades of grey markings. Skins under these markings have dark pigmentation.

The Pyrenean Mastiff was primarily developed to be a flock guard. This breed has strong work ethics. It is a common practice of this dog to select a place with a high vantage point where it can watch the flock, always alert and ready to defend the flock against predators. Nowadays, the Pyrenean Mastiff is seldom seen roaming the countryside with the flocks of sheep. This breed has retired from its original occupation. The dog has found its niche in the homes of dog lovers, being the loyal companion and the affectionate and gentle playmate of the children. This breed has a calm and stable temperament. It craves human companionship and would always want to be included in the activities of the family especially those that involves the children. This breed loves kids. However because of the massive size, the dog can inadvertently hurt very small children while at play.

This is not an aggressive breed. The dog is tolerant of other household pets although it would not be uncommon for the dog to show a dominant behavior towards other male dogs. A Pyrenean Mastiff will not instigate a fight but it will protect its territory at all cost especially if it involves fighting for a female dog. Early socialization and obedience training will benefit any breed of dogs though for a Pyrenean Mastiff socialization and obedience training is imperative. This is a large breed. An unsocialized and untrained dog would be hard to control because of its massive size. This breed has an inherent distrust of strangers, the reason why it makes an excellent guard dog. This silent sentinel will protect the family and the property at all cost. This dog does not bark without a reason and when it does, it means that something is amiss or an intruder is sighted. The calm demeanor belies the swiftness of movement.

This dog is not suitable for first time dog owners or for a person living in an apartment. This breed has high exercise requirements and would require large spaces. The dog would appreciate to wander in a well fenced area, to sniff at everything and to expend its energies on interactive games.

This breed has moderate grooming requirements though grooming can be time consuming because of the dogs massive size. The longish coat is prone to form mats if not brushed thoroughly. Weekly brushing would ensure and maintain the good condition of the coat.

The Pyrenean Mastiff is one of the giant Molosser breeds. This breed is believed to have descended from the dogs brought by the Phoenicians 3000 years ago when they travelled from Assyria and Sumeria to the place which is now Spain. This breed is said to be the cousin of the Spanish Mastiff. Spain is yet unborn during the Middle Ages. Only the Castilla and the Aragon kingdoms existed. From these two kingdoms two breeds of dogs were developed. The Spanish Mastiff was developed in Castilla and the Pyrenean Mastiff was developed in the Aragon. The Pyrenean Mastiffs became the flock guards of the Aragonien sheep herds and for centuries has protected the sheep from wolves, bears and other predators. These are excellent guard dogs that were utilized to protect the farm, the houses and the castles. The dogs are most commonly seen guarding herds of sheep being transferred from one grazing land to another. Around 1930 to 1940, the large herds of sheep slowly disappeared. Wolf population in the Spanish Pyrenees Mountain has also declined. Locomotives were now used to transport the sheep. Consequently, dog population tremendously decreased as feeding the large dogs that has no useful job has become a burden especially during the hard times after the Spanish Civil War years. Fortunately, a group of Spanish breed enthusiast have made concerted efforts to revive the breed. About 100 dog were found and from these dogs 30 were selected to be made the base of the breeding program. In the 70s the breed has started to make a comeback. The Spanish Pyrenean Mastiff Club was formed in 1977. The clubs main objective is to save the breed from extinction. The breed is still considered to be rare but interest for this majestic breed was revived. The Pyrenean Mastiff has definitely made a come back, this time not to be the companion of sheep but to be the loyal companion and dependable guard of the family.