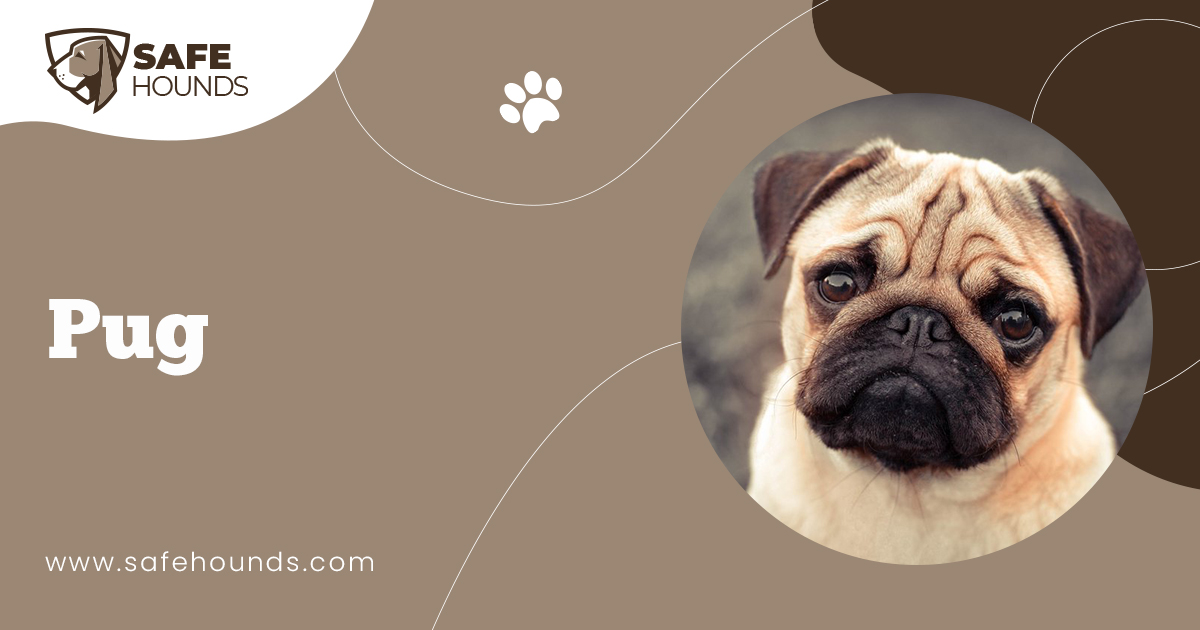 The Pug is a breed of dog that is a dog to have as your own. Pugs are loving, caring, absolutely desire all the attention, and will always be there for their owner. Pugs love to play and are very active. They love to run around and play but they need to be slowed down because of their breathing. Over exercising your Pug can result in them starting to wheeze or what is known as a backwards hiccup. This does not hurt them even though it may scare their owners. It helps to rub their throat so they swallow.

Pugs do not need to have a giant yard to play in. Simply playing with them in the house with toys and such will make the Pug happy to no end. Pug puppies do tend to chew on things and can still chew up until they are a year and a half. So, make sure to watch them so they do not chew on anything they should not be chewing on.

Pugs love to show affection to their owners all the time. They show it by either lying down with you at night on the bed, cuddling, or they show it by licking your face. It is their way of showing you that they love you.

Pugs are great to train. They are smart when it comes to learning something new. So, if you want to teach them to sit, roll over, speak or any kind of trick then they will be willing to work with you. Make sure, when you punish your pug to not raise your voice. This is something Pugs are sensitive to and they might become afraid. So, just use simply talking with them and they should have no problem listening to you during training and all the time.

The Pug has a body that is compact, stocky, kind of square, and thick. Pugs have ears that can come in two varieties. The first one is the rose look. This is where the ears are small, round, and folded with the front edge angled toward the mask, giving the head a more rotund shape. The second one is called button. This is where the ears are level with the top of forehead and folded at a sharp ninety degree angle. Their ears are very soft and feel like velvet. On their cheeks, they have moles, which are considered their beauty spots. They have very expressive eyes that are dark and gleaming. Their tail has a tight curl that lies on their back or in some Pugs, they have a double curl to their tail. They have straight and strong legs. Their bite has a slight undershot bite to it. Their face has wrinkles with a kind of pushed in looking face. This is one characteristic that everyone knows, loves, and has helped to make them so popular.

Their fur coats are soft and sleek. They can come in a range of colors like apricot, fawn, black, and in silver. Fawn colored Pugs have a double coat of fur. They have a thick undercoat and a thin overcoat. In the United States today, there is a big variety of black and Fawn Pugs instead of the Silver Pug. The Silver Pug is more likely seen in European countries. There are however silver colored Pugs in the United States but not very many as they are not as popular.

Many people have been known to say that the Pug is A lot of dog in a tiny space. This is because of how perky, loving, loyal, happy, affectionate, playful, and charming they tend to be. Pugs have been known to be the type to get jealous when their owner is paying attention to something else other than them. So, make sure to give them all the attention you can. Pugs are great with children and very well, when visitors are around. You can also be sure if you have other pets in the household that the Pug will do fine with them.

The Pug can be a good watchdog because of the devoted nature to their home and family. They are not big barkers but will let you know when someone is around. Pugs are a great dog to train. They love to learn new and exciting tasks and are very smart to the point that they learn it quickly. When punishing this breed, you do not need to have a harsh tone with them because they are very sensitive to your voice.

Pugs are great for apartment life and can do fine even without a yard. They are fairly active indoors. Pugs, however, are both sensitive to overly cold or overly hot weather.

Pugs have a smooth and short coat that is easy to maintain and take care of. They only need brushing and bathed when needed. When they are given a bath, make sure to dry them off very well and quickly so they are not chilled.

The wrinkles on their face need to be cleaned on a regular basis to prevent any infections. Best way to clean their wrinkles is with a baby wipe. Just rub it in the wrinkles. The moisturizer found in baby wipes will also help to keep the skin of the wrinkles soft. The wrinkles need weekly cleaning or any time you notice a dirty build-up. They are prone to yeast infections in and around the wrinkles if the area is not kept clean. Pugs are normal seasonal shedders so they are not good for anyone with allergies to dogs.

Pugs need their exercise to stay in shape and to avoid becoming over weight. Make sure when letting them exercise that they do not over do themselves and start wheezing. This can be a problem if they over work or play a bit too hard.

The Pug is one of todays oldest breeds of dog. They have been known to go back as far as 400 BC over in Asia. There have been a few stories told on the origin of the Pug, so to be exact when talking about their origin can be difficult.

One theory is that the Pug was brought back from the Lowlands, in the Far East, by Dutch traders. They said that the Pug had descended from the short-haired Pekingese. Yet another theory is that it was crossed either with a small Bulldog or with a rare French Mastiff by the name of Dogue de Bordeaux. Therefore, as you can tell, the exact origin is quite fuzzy.

Artist Hogarth had his love for Pugs. In one of his masterpieces, he included his pet Pug Trump. In the 16th Century, they were also adored by the European Courts, which reached popularity around the Victorian times. The Pug was a pet at the Tibetan monasteries and then afterwards traveled to Japan. The breed became popular in Europe and then was the pet of royalties in many different countries. The Pug is also the official dog of the House of Orange over in Holland.

A Pug had saved the life of William who was Prince of Oranges when he had alerted him of Spaniards approaching in 1572 at Hermingny. Josephine who is the wife of Napoleon used her pug to send messages back and forth to her husband when she was in prison by putting notes under the collar. In 1860, when the British had overrun the Chinese Imperial Palace they found many upon many Pugs and Pekinese. They brought the dogs back to England with them. In 1885, the Pug breed was noticed by the American Kennel Club and has now become a popular breed. The Pug today has become a wonderful companion dog and very much loved by many owners.