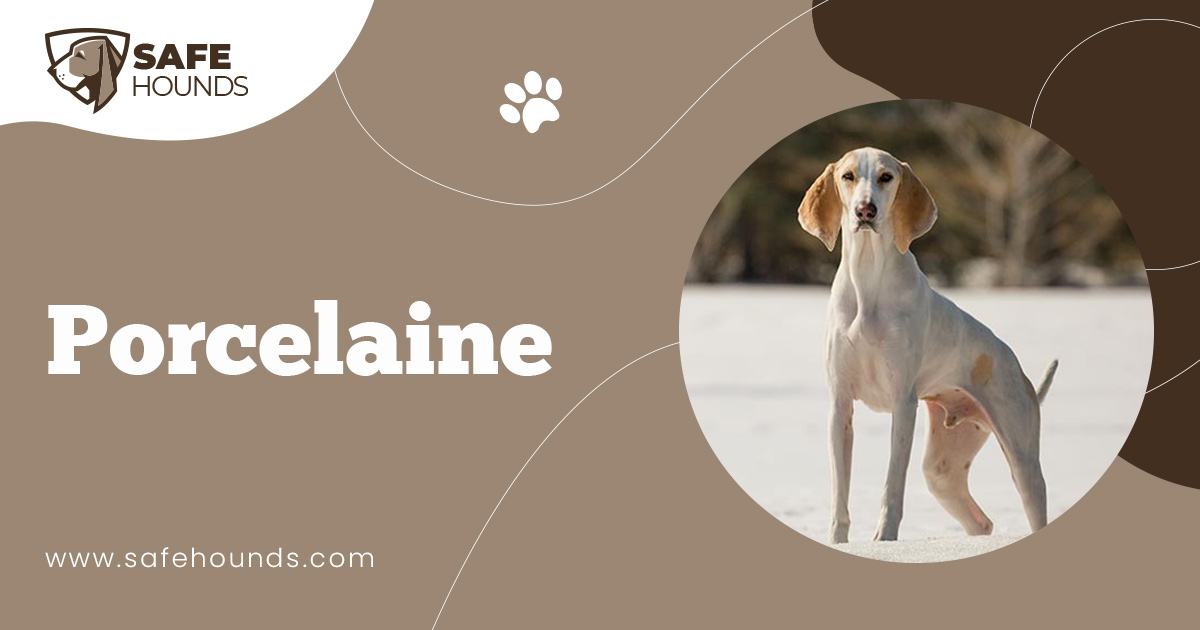 A Porcelaine statuette of a dog on the porch of a white stone house attracted the attention of passersby. What a beautiful figurine! It looks like a real dog Suddenly, the statuette throws back its neck and with its nose in the air, let out a beautiful melodious howl. Its a real dog after all!

The dog is a Porcelaine. Also known as Lunéville Hound and Franché-Comté Hound, this breed of scent hound that was originally utilized to hunt hare and roe deer calls France home. The breed was given the name Porcelaine because of the incredibly short, very fine smooth hair and the black mottling on pink skin that gives the coat the sheen likened to porcelain. At a distance, the coat would look like a pale blue glass.

This breed is a vigorous and tireless hunter that possesses an excellent scenting ability and a melodious resonant voice. Porcelaine Hounds hunt in packs. These very independent dogs would hunt on their own without waiting for the orders of the owner. The dog can be difficult to train given that they do not have the canine eagerness to please behavior. If you want a dog that would immediately follow your command you have to look for another breed as the Porcelaine is definitely not for you. These dogs are excellent hunters not only of hares and roe deer but of large game as well. This brave dog would not be intimidated by wild boar. The Porcelaine is one of the few French breed of hunting dogs that have gained the interest of hunters form other countries.

The Porcelaine is a talented hunter that is noted for its melodious voice. Aside from the well balanced temperament and the impressive appearance, the dog is sociable and would bask in the attention it gets from people. This makes the dog a suitable home companion. Energetic while hunting, a Porcelaine is calm and well behaved at home.

The dog was given the name Porcelaine because of the shinning glassy coat that gives the dog a statuette-like appearance. This breed has the classic long ears that are typical to a French breed of dog. The dogs finely sculpted head has a wide rounded skull, a flat forehead and a marked stop. Of good length, the straight muzzle that slightly arched at the end is tipped by black well developed nose with well opened nostrils. This aids the dog in tracking and hunting. Black pigmented upper lip covers the lower lip without drooping. Developed dark eyes give the dog a sweet and intelligent expression. Thin ears that are conical in shape have pointy tips. These drooping ears are set on the side of the rounded head and curls inwards not unlike that of a Labradors. This breed has a fairly long and muscular neck that shows a little dewlap.

A Porcelaine is large breed of scenthound. Males are slightly bigger than females. The breeds average weight ranges from 55 to 62 pounds. This beautiful French scenthound measures from 21 to 23 inches at the withers. A Porcelaine has broad straight back and prominent withers. Chest of average width is deep. Ribs are rather long but not flat. The dog has a slightly tucked up flanks. Well attached long tail has a strong root and thins at the end. The tail is usually carried with a slight curve. Long and rather skinny legs have small cat-like feet.

A Porcelaine has supple fine pinkish skin that has sparse dark mottling. The generous smattering of liver colored and light brown spots shows through the white coat and give the coat a translucent pale blue color. The coat is what earned the dog its name. The incredibly fine and short hair that lies flat against the skin without showing any bare patches is very glossy. A Porcelaines coat is usually solid white but some specimens white coat may have varying sizes of circular shapes in shades of orange, fawn and apricot. Puppies are born with pure white coats. The markings develop as the dog matures.

The Porcelaine was bred to hunt. This dog is an energetic and ferocious hunter. The dog also has a sweet nature, gentle and easy to handle. These qualities make the Porcelaine a suitable home companion. This sociable breed will show its friendly nature to one and all. This tireless hound will enjoy home life and would always be ready to play with the children. Having been hunted in packs, the Porcelaine tolerates other dog well. However, the dog must not be trusted with smaller pets. Because of a high prey drive, a Porcelaine has the tendency to chase smaller animals. This sociable animal does not like to be left alone for a considerable time, the dog will be destructive. A Porcelaine is also known as the singing breed. A Porcelaine that is not given much attention by the family will show its boredom by its excessive singing. Prospective owners must be aware of the fact that this breed is a hunter and one that has high energy levels. Apartment living is not recommended for this breed. It would take a lot of efforts for an apartment dweller to ensure that the exercise requirement of the pet is provided. Country life is ideal for this breed as they can be allowed to run freely.

The short coat of a Porcelaine would not need extensive grooming. Using a soft brush on the coat daily will remove dead hair. Frequent bathing is not necessary as the short coat practically sheds off dirt. However, the dog is a hunter and it would need to be thoroughly checked for ticks, thorns and other foreign objects that may have been embedded on the ears and between the toes. The pendulous ears would need regular cleaning to prevent infection.

The Porcelaine is considered to be one of the oldest breeds of scenthounds that originated from France. The bred is also known as the Chien de Franché-Comté. The name was taken from the France-Comte province, a former French region that borders Switzerland. This very old breed was speculated to have descended from the now extinct Montaimboeuf, the ancient breed that was directly developed from the Talbot Hounds. It was also believed that this beautiful and statuesque breed has descended from the English Harrier and from the Swiss Laufhunds. Because of the impressive white coat the Chien Blanc du Roy and the white variant of the St. Huberts was considered as the progenitors of this breed. Like any other ancient breeds the origin of the Porcelaine is also uncertain. However, the breeds existence was traced back to the 1600s.

For many years, the Porcelaine Hounds were kept by monks in monasteries and abbeys in the Luxeuil and Cluny regions. The dogs then were considerably larger and noted to have coarser hair. The French Revolution in the 1700s has greatly affected the breed. Because the dogs were mostly kept by the upper classes, the revolution has almost decimated the breed population. The Porcelaine actually disappeared. Only a few specimens were seen on the French-Swiss border. This actually led to confusion as to the dogs origin. Records of the breed exist in France as early as 1845. As compared to the 1880 records of the breed in Switzerland, it was finally decided that the Porcelaine is a French breed.

The breed disappeared after the French Revolution. When the French nobility fled France, the dogs were taken with them and a good number of hounds reached other lands. Breed enthusiasts in France also instigated a breed revival program. Breeders have used the Laufhunds in reviving the breed in 1845. Breed reconstruction was successful. The Porcelaine scenthound now has a stable population. Although still considered rare, the breed was saved from extinction. In 1971, the Porcelaine Club was formed. The dog was officially given the name because of the white glossy coat.

Porcelaines can now be seen in other countries. The Rousseau family from the east of France fled to Louisiana during the French Revolution. Some Porcelaines were taken with them. The Rousseau was granted by King Louis XIV large tracts of lands. The Porcelaine were raised in the Rousseau plantation. It was reported that 250 Porcelaine hounds were kept by the family. A painting owned by the family showing 31 Porcelains while killing a panther was shown in a 1906 Paris exhibit. The plantation was broken up after the Civil War and most of the dogs were given as gifts to ranchers. It was speculated that the Porcelaine has prominently figured in the development of the Native American hound breeds.