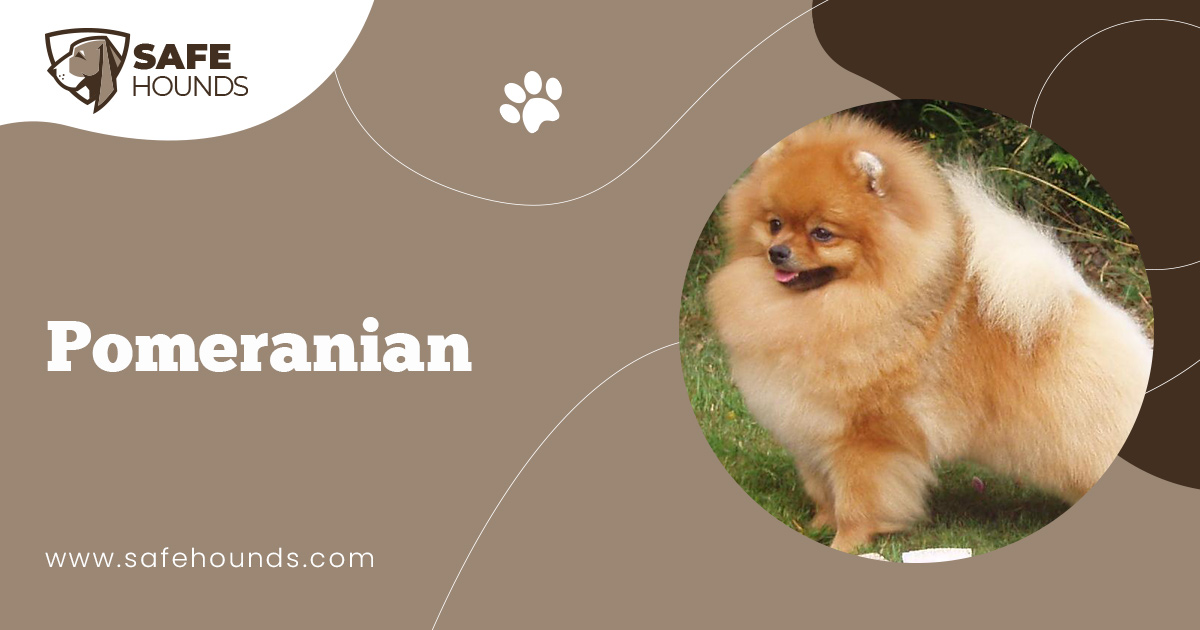 This tiny little bundle of joy is a member of the Spitz family. Many have said they look like tiny little foxes with their wedge shaped heads and upright little ears. They all have dark little eyes and have a very intelligent look on their face. The nose is usually black but some have the same color as their coat. They are very lightweight and fragile.

They love to stay close by their masters, therefore if you have a favorite chair you sit in you should always check before sitting, as you may sit on your little dog. You also have to watch so you do not step on them, as they will be right under your feet. They desire attention all the time.

You can expect complete loyalty from this little guy. They are very fast learners and love to get attention. Pomeranians love to play and these dogs make great pets for the elderly because they love to sit on your lap and be petted.

They are an active dog so a walk will suite them just fine. Even thought they are attentive and fast learners, you want to make sure they are trained with a firm hand or they will rule you. They are a nervous little breed though so watch them around children if they get too much playtime, they might get snappy and bite. This is rare but it has happened. They love to bark so they must be taught early about excessive barking when someone comes over or they may never be quiet.

When looking at a Pomeranian you will see a fluff ball with eyes. These little dogs are all fur and very fluffy. They have dark little beady eyes and a nose to match. They hold there little tiny ears straight up. Their teeth should match into a scissor bite. They have a prominent tail that flips over their back fanning out the fur so it covers their back. The fur around their head is puffed up making them look a lot bigger then they are. You will notice this when you give them a bath. Not much there when the fur is all wet.

They usually weigh from 3 to 7 pounds and stand around 7 to 12 inches in height. There are about six different colors of coat including red, orange, white or cream, brown, blue, or black. The red and black are the most sought after. There are several that have two colors to their coats and these are known as parti-colored. The American kennel Club only recognizes some of these colored coats.

They have a double coat with the undercoat being soft and fluffy and the top coat being the straight and longer harsher coat. They need daily brushing to stop matting from occurring. The males will shed once a year while the female only shed when they are in season after having a litter or when they are stressed.

There are no such breeds as a miniature or toy Pomeranian. Do not buy from a breeder that advertises this. If they are smaller than stated above they are probably underweight or may have a disease. Beware. You want one that is around the normal weight of 3 to 7 pounds and about a foot tall.

Many people have said Pomeranians are nothing but barkers. Well, they will bark and stop if trained right. It is not the dog, it is the owner that makes your dog what it becomes. These dogs are very sweet and loyal towards children. In addition, if raised properly with do quite well with other dogs and cats in the home. They will love if you give love right back. If they are not trained right, just like any other dog they will end up as rescue dogs. Too many people do not see the charming side of Pomeranians or any other dog because they are too impatient to teach them how to behave. You must work with your dog and he will learn.

Your Pomeranian needs daily brushing to keep their coat all fluffy and unmated. You will want to give them a bath only when dirty because bathing will cause the fur to lose its sheen and oil if bathed too much. You can comb out the hair when it is shedding, which for males is once a year and female when in heat.

Have their teeth checked and keep their toenails cut and your dog will be happy. Of course, regular vet visits and the proper dog food is a must.

Apartment life is great for the Pomeranian as he is active but he will get his exercise by following you around. You should allow him to take a walk or play in a fenced in yard in order to receive enough exercise.

The Pomeranian originated from the Artic Circle, specifically Iceland. They are relatives to the Samoyed, Malamute, Husky and the Siberian husky. The Pomeranians ancestors were used for pulling sleds and carrying loads for their masters as well as hunting and guarding their homes. Then in 1700, explorers brought them to Pomerania where they were used as herders. The Deutscher Spitz is most likely the dog used in the mix to aid in the creation of the Pomeranian. They weighed around 30 to 35 pounds.

Queen Charlotte of England brought a white dog home that weighed 15 pounds. This is the time when they were given their name Pomeranian. Pomeranians were the first dog to live in Buckingham Palace. However, the wealthy people of England wanted a much smaller dog. This is when the downsizing began. Of course, with the downsizing they started to have genetic problems as well.

Queen Charlottes granddaughter, Victoria, was a dog lover. She raised over 15 breeds in her time, but towards the end, she fancied the Pomeranians. The ones Victoria owned weighed around 8 pounds and were given the name Toy Pomeranians. Today all Pomeranians weigh around 3 to 7 pounds. They are bouncing bundles of fur and love to play!

Some famous people who have had Pomeranians include Michelangelo who had one that would watch him as he painted the Sistine Chapel ceiling. Isaac Newton had one named Diamond. Mozart had one named Pimperl and Chopin was always amused by his girlfriends Pomeranian that he composed the Valse des petits Cheins for her.