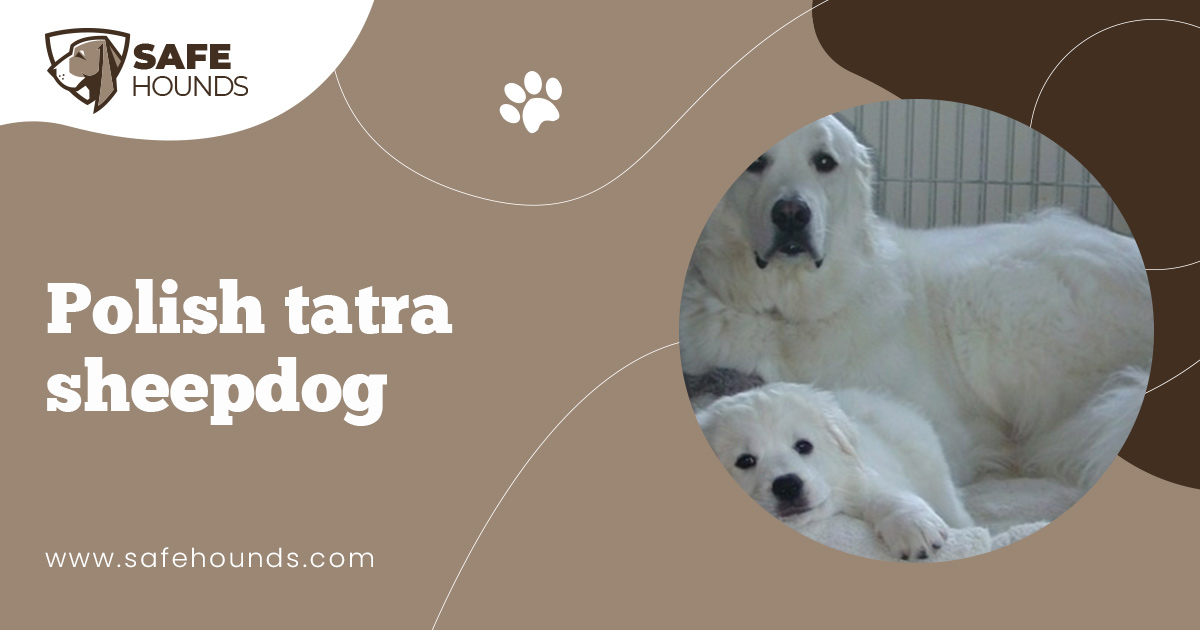 A sheepdog would either guard or herd sheep. The Polish Tatra Sheepdog may look like the other white flock guardians but there is actually a big difference. This breed of giant sheepdog that is most commonly found on the scenic foothills of the Tatra Mountains is both a guard and a herder of sheep! The Polish Tatra sheepdog has existed since the 14th century in Podhale, a region in southern Poland. In the day time, this dog would listen attentively to the shepherd and immediately carry out the command, be it to gather the flock or to guide the sheep to another pasture or to the pen. The dog is neither a heeler nor a nipper. It would gently and quietly move along with the sheep and use its immense body to guide the sheep. The amiable and gentle character of the dog will change once the sun sets as it has to perform another role. This time the dog is going to be the flock guard, one that would mark the perimeter with its feces and urine to warn the predators not to trespass. Placid in the daytime, the dog would be vigilant and constantly patrol the territory. Instead of being disturbed by the deep sonorous canine voice the Gorale (shepherd in Poland) can sleep soundly knowing that the sheep is free from harm.

The Tatra is a big dog, usually weighing 100 to 150 pounds and measures from 23 to 34 inches at the withers. This breed of sheep dog has a massive heavy boned and well muscled body. The all white profuse coat give the dog an attractive appearance. This energetic breed loves the great outdoors but they are also known to be devoted and loyal to its human family making them outstanding and dependable workers and gentle and loving family pet as well. The dog makes a good watch dog as it is wary of strangers. Very territorial, the dog would bark to warn the family of intruders. This is a self thinking, independent breed. Training therefore can be quite a challenge. Irritability is a fault of the breed. Socialization and training must be started from puppyhood.

When you see a Polish Tatra Sheepdog it would be very apparent that with the well boned and powerfully muscled body the dog can effectively perform is functions, that of guarding and herding the flock. Still, the dog has been chosen to be companion and household pets because of its eye catching appearance.

This breed has a rounded head and skull that is proportionate to the body. The dogs nasal bridge is broad and the strong muzzle gently tapers to a black nose with well opened nostrils. Dark pigmented lips are taut and well fitting. Strong teeth meet in a scissor bite. Expressive eyes are dark brown in color, medium sized and slightly slanting. Medium length ears are thick, triangular in shape and densely coated. A Tatras medium length neck is muscular and profusely covered with hair that forms a mane. This breed has a massive and compact rectangular body with a broad level back, wide loins, deep chest and rather flat and oblique ribs. Tail that is set on rather low is carried below the level of the back when the dog is relaxed. When alert, the tail forms a curve and is carried over the back.

The Polish Tatra Sheepdog has an attractive pure white coat. The coat is so profuse combings are made into fine woolens and used for upholstery. The head and the front legs are covered with shorter hair. The neck and the rest of the body are profusely covered with longer hair. The waterproof double coat allows the dog to withstand extremely cold or hot weather conditions. The thick hair can be straight or slightly wavy. The top coat is rough to the touch. The undercoat is dense and profuse.

The Tatra is a courageous and hardy sheepdog. It is a loving and devoted family pet as well. The dog is devoted to the master and gentle with the children especially if the dog was raised with them. A Tatra may have a well balanced temperament but it will not tolerate abuse from its master or from the children. The dog is wary of strangers and would bark ferociously to warn the family of intruders but it seldom bites and would only do so if challenged and if there is a necissity to protect the flock and the family. The dog is tolerant of dogs and other pets. The dog is not an excessive barker but it has the tendency to bark at anything unusual. A Polish Tatra Sheepdog is not suitable for apartment living as it will surely disturb the neighbors. Also, the dog has high exercise requirements. Because it is accustomed to roaming the pasture, it would rather go for long walks or accompany the master jogging than play catch ball with the children. It would appreciate to be given considerable space to exercise and a task to do.

This sheepdog has a profuse coat that needs to be groomed regularly to avoid the formation of mats. Although white coated, the dog will not require frequent bathing as the coat practically cleans itself. The natural oils of the coat shed off dirt easily. The undercoat is shed heavily twice a year. During shedding season, the coat must be regularly brushed to remove dead hair. A dog that stays indoors will shed the whole year thus, regular brushing is necessary. Ears must be cleaned at least once a week. Eye cleaning, teeth brushing and nail clipping must also be done regularly.

The Tatra originated in Podhale, the small region in southern Poland that is against the highest peak in the Capathian Mountains, the Tatra range. It is believed that this breed was developed from the Tibetan mastiffs. The Tatra, similar to the dogs from Romania, Czechoslovakia and Hungrary were developed from the dogs introduced by the Phoenicians to the eastern world. It was speculated that the Tatra is nothing but the white variant of the Sarplaninac that was introduced by the Wallachian traders to Poland. However, the Tatra are much bigger than the said white dogs and it was speculated that the Podhale dogs originated from the Hutsul dogs. Other dog experts believe that the Tatra is the only Polish Molloser similar to the mollosers of Turkey and Greece.

The Tatra Mountains where the dog originated is a small though very picturesque area that was mainly utilized for shepherding. For centuries, the Tatra have been a most valued helper of the Polish farmer. The dog was utilized to herd and protect the flock. These dogs earned the title the thinking dogs as it has a rather unique way of protecting the sheep. A Tatra pack would usually surprise the predators. Instead of leaving the flock to go after the wolves, the dogs would show great restraint and wait for the wolves to move in. Without breaking the pack, the dogs have a better chance of killing the wolves. The dogs stayed with the grazing flock but come winter, they be utilized to haul carts filled with farm produce. Tatra specimens showing high intelligence were used as guide dogs in and military and police work. When mountain climbing became popular in the middle of the 19th century, the dogs tail was used as a handhold when traversing rough and steep terrain.

World War 11 has decimated the Polish Tatra Sheepdog. The breed has earned another title from Tatra lovers. The Tatra is a breed that refused to die as although it managed to survive the war years, the breed almost become extinct because the flocks decreased tremendously when the country fall under the rule of the communists. A revival program was started by breed fanciers in the 1960s. The remaining specimens were crossed with the Kuvasz. By mid 1970s, the breed population is gaining stability. The Polish Tatra Sheepdog was officially recognized by the UKC in 1995. The Tatra is still considered as one of the rare breeds of dogs although the dog is now found in other European countries as well as in United States.