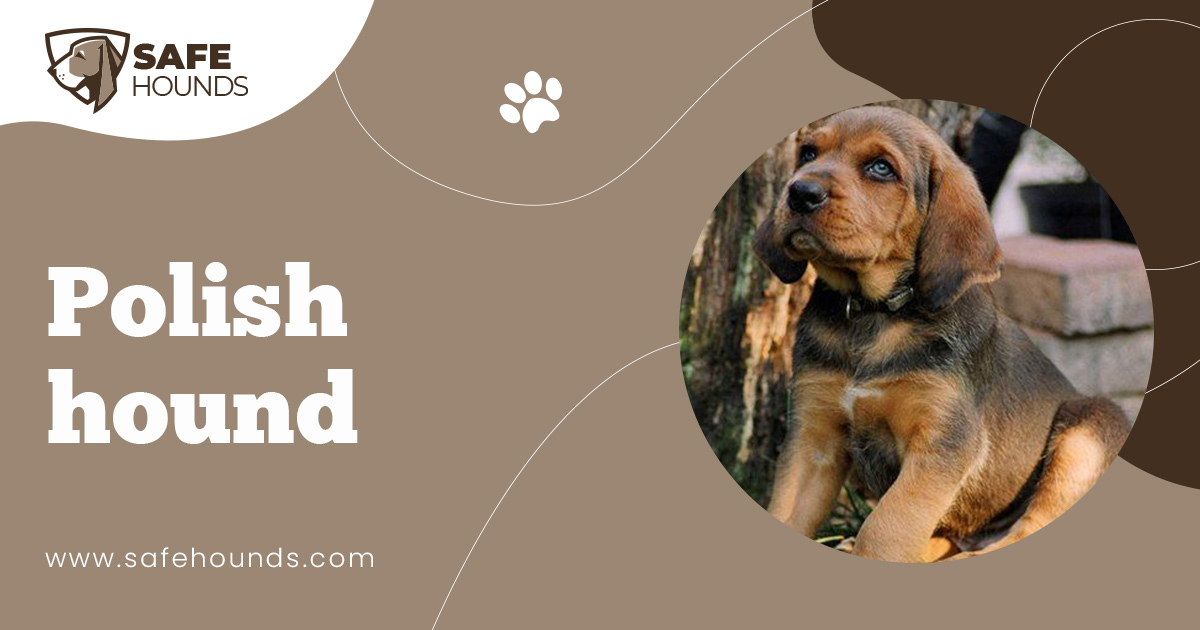 Polish Hound, otherwise known as Ogar Polski was primarily developed to hunt. This breed has existed since the 13th century and was noted to have been the favored hunting companion of the Polish nobility. These hounds became a most common feature of the noblemens manors from 14th to 18th century. The origin of the breed is cloudy. Some believed that the Polish hound was developed when St. Hubert hounds were crossed with local dogs. It was also speculated that German and Austrian breeds were the ancestors of the Polish Hound. The Polish Hound is a massive breed of scent hound with an impressive muscular physique. The breed is noted for its keen sense of smell and for its beautiful resonant voice. This passionate hunter is noted for perseverance that borders on stubbornness. When it comes to trailing a prey, harsh weather and difficult terrain will never intimidate the dog. The beautiful singing voice is one of the distinct characteristics of the breed. Moving at a steady gallop the dog would incessantly bark while trailing a scent.

The Polish Hound has an average life span of 13 to 14 years. Being a large breed, the Polish Hound matures slowly. These dogs are not finicky eaters. A good quality kibble given on several small meals is recommended for better health. This breed is first and foremost a hunter. Because of the rather small population, the dogs are seldom seen on dog competitions. However, when they do compete, the dogs almost always grab the leading place. A Polish Hound makes an ideal companion and family pet. This intelligent breed trains easily. It has a loving and loyal temperament. Wary of strangers and very protective of its human family, this dog makes an excellent guard dog, one that will protect the family and the territory at all cost.

The Polish Hound is a breed of medium to large scenthound with an impressive muscular body. The subtle stature of a female easily distinguishes it from the rather heavy conformation of a male. On the trail a female can be differentiated from a male because of its higher pitched voice. With the strong bone structure and the compact build it is apparent that this breed has strength and endurance. The Polish Hound has a noble head with a distinctive wrinkled forehead. The elongated and truncated muzzle is neither pointed nor wedge shaped. The muzzle is tipped by the large wide black nose. This dog has strong jaws, thick drooping lips and teeth that meet in a regular bite. Slanted dark brown eyes have a gentle and serene expression. Rather long ears with slightly rounded tips are set low and hang close to the head.

A Polish Hound has a thick powerful and well muscled neck with loose and richly folded dewlap. This breed has a muscled long broad back, wide deep chest, well sprung ribs and capacious belly. The abdomen is slightly tucked up. The thick tail is low set. The lower part of the tail is covered with long hair. The tail is normally raised but not rolled up. On the move and when the dog is alert, the tail is raised but not above the horizontal line of the body.

Polish Hounds have thick medium length hair with dense undercoat. Longer hair covers the dogs back, the back of the hindquarters and the lower part of the tail. A Polish Hounds podzary (burnt) tan coat color is much appreciated by Polish hunters although this breed can have a black or dark grey body, tan legs, head and ears. White hair that forms a star or a blaze that extends to the muzzle and chest gives the dog a distinct appearance.

Polish Hounds are tenacious hunters. But aside from being outstanding hunters, these dogs are equally good in being home companions. These are gentle, affectionate and loyal pets that make excellent companions and playmates of the children. This dog tolerates other dogs and other pets of the family. The dog does not have an aggressive behavior but it is also loyal to the family. This would mean that the dog would protect the family and the property if necessary. The dog would not fail to sound the alarm if and when an intruder is detected. Moreover, the massive size as well as the resonant voice will deter any intruder. This dog would do well in a rural or urban setting. A Polish Hound does not have a very high exercise requirement. Long walks would keep the dog fit.

A Polish Hound is an easy dog to care for. The slightly longer hair protects the dog from harsh weather conditions but it does not need extensive grooming. This breed does not shed much. Regular brushing with a firm bristled brush would remove dead hair and maintain the good condition of the coat. As with any other breeds, frequent bathing is not necessary. A damp cloth will be sufficient to clean the dog. However, the pendulous ears must be given more attention. Regular cleaning would be necessary to prevent ear infections.

The Polish Hound commonly known as Ogar Polski is an ancient breed of hunting hound that calls Poland home. Like many other ancient breeds, the origin of the Polish Hound is quite unknown. The breed is indigenous to Poland but there were speculations that it is related to the Austrian and German hunting breeds. This breed is a passionate hunter noted for its keen scenting ability. Poland then and now is covered by game rich forests. This keen hunter has always been highly valued by Polish hunters for its good resonant voice and for the perseverance to hunt in varied terrain even under harsh weather conditions.

This breed of hunting dog may be relatively unknown outside the Polish borders but it is quite popular in its country of origin. 14th century records validated the fact that this breed was highly favored by Polish nobility. It has gained a rather large following in fact the dogs utility was fully described in the Myslistwo z agary (Hunting with hound dog) written by Jam Ostroros in 1616. The writings however, were concentrated on the hunting prowess of the dog and never on the description of the dogs appearance. The dogs therefore were not distinguished until in the 17th century when two different types of hunting hounds emerged.

Descriptions of the Polish hunting hounds were found in 19th century literature. In 1819, Jan Szytier fully described and differentiated two types of Polish hunting dogs – the Polish scenthound and the Polish Brach. In 1821, W. Kozlowski further described and illustrated both types. These two types of hunting dogs were used in Poland particularly in the difficult and harsh mountainous terrain of Polands eastern regions. The strife of the war years has made a great impact on the population of the hunting dogs. The breeds almost became extinct. Fortunately, two colonels have made efforts to revive the breed after the Second World War. Colonel Josef Pawuslewicz (1903 – 1979) developed the breed that is now called Gonczy Polski. This breed is the smaller Polish hound. The larger line that was developed by Colonel Piotr Kartwik was given the name Ogar Polski. However, broth breeds were categorized as Polish Hound by the English. To recreate his line of Polish hound Colonel Kartwil used the dogs imported in the 60s from Nowogrodek, an east of Europe region. After a valid standard for the breed was created the Ogar Polski was officially registered by FCI in November 15, 1966.

The breed is relatively unknown outside its country of origin. The breed is also considered to be rare. Really quite a pity as the Polish Hound is not only an outstanding hunting companion but also an affectionate and loyal home companion.