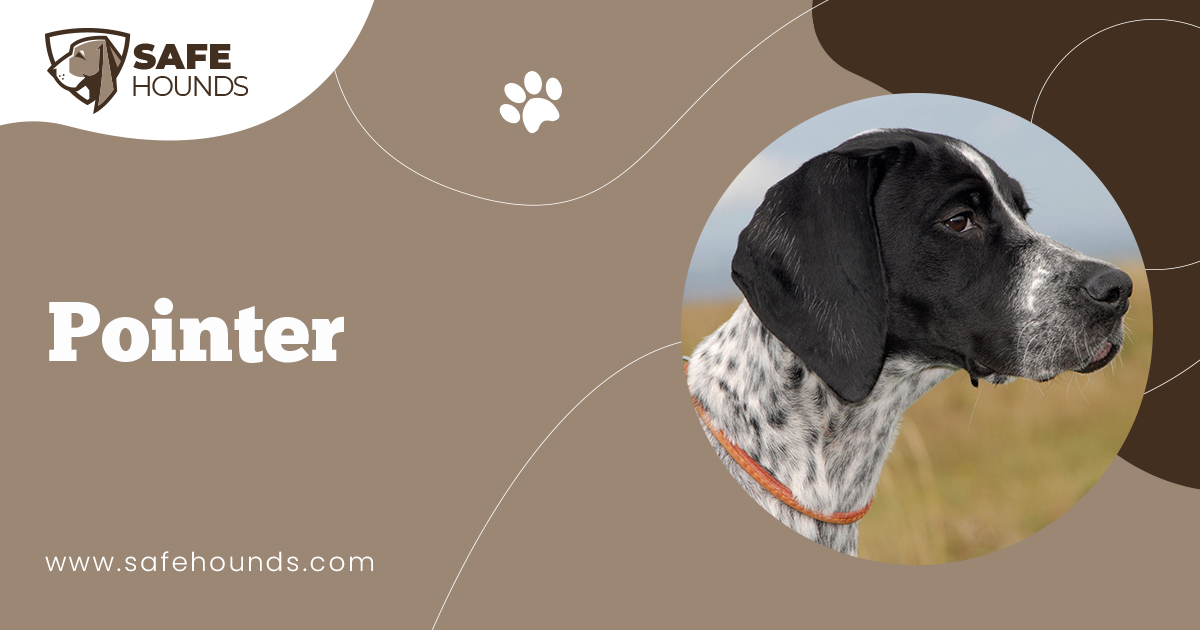 The Pointer is a breed of dog that has been known for hunting for several years and still to this day is used for hunting. They can be a family pet as long as they are getting the exercise they need on an everyday basis. These dogs if under exercised can become restless and might start destroying things in the home. So, make sure, if you have a pointer for a family pet that they receive the proper exercise.

The Pointer is a dog that is known for being kind, gentle, and loving. They love kids and love to play with along with them as part of the family. This breed is also good with other household pets. Not only are they good with the family, but they are also pretty easy dogs to take care of since they are naturally clean animals. These dogs have a life span of 12 years to 17 years. Therefore, this dog will be with the family for many years. This is why taking care of them is important to do so they live a long, healthy, and happy life.

So, if you are an average hunter and looking for that one dog to help take down the prey and point it out for you when you shoot it, then the Pointer is the right dog for you. The one thing to love with these dogs is they form their body where they are pointing at the prey that has been shot, so you know where it landed after it has died. This is the dog that will find any prey you take down no matter where it is at.

The Pointer is a powerful dog and also very graceful. This dog has an alert type expression to their face at all times. Their body is muscular and they have a very athletic body. Depending on the color of their fur coat they can have either hazel or chestnut colored eyes. Their ears are pointed and about medium size. The Pointer has a long neck. Their tail is very straight and tapered. Their tail is never docked. They have oval feet and their dewclaws can be removed from the front legs, but that is an option for this breed.

Their coat is sleek and shiny with short hair. The colors this breed can come in are mainly white, but they have been known to have a liver color (brown), lemon, black, or orange. These colors can be solid, patched, or speckled colors. The color of their nose should be the same as tier markings on their fur coats

The height for the Pointer for the males is between 25 to 28 inches and for the females it should be between 23 to 26 inches. The male Pointers weight is around 55-77 lbs. While the female is normally smaller than the males are.

The main distinction about this breed is their head, feet, and their tail. When used out hunting you might see their body kind of point to the prey that has been killed when they find it. This is the most unique feature of this hunting dog that everyone loves to see.

The English Pointer has been known to be called a gentleman. Not only are they full of energy but they are also gentle and patient when it comes to children. This dog can adapt to most situations and is very smart when it comes to hunting or any other tasks you may want them to do. They are very trainable and love to learn new things. The Pointer is very loving and affectionate towards their owner and their family. Some Pointers can be high strung, so make sure to have them socialized at an early age to prevent timidity to people or household animals. This dog can bark when unfamiliar noises make occur, but they are not used for being a watch dog of any kind. The Pointers hunting ability starts at an early age and even puppies that are eight weeks old can even show signs of pointing. The Pointer is good with other household pets.

The Pointer is not recommended at all for apartment living. They are active indoors and do best with a big yard so they can run, romp, and play. Make sure to keep an eye on them incase they go out hunting on their own.

The breed of the Pointer is very easy to take care of. A simple brushing once or twice a week with a firm bristle brush will be fine. They only need a bath when really dirty since the Pointer is a very clean dog on its own.

Make sure to check their feet after they have been out exercising or hunting in case of any torn pads or torn toe nails. Also, make sure to keep them clean as well. After hunting with your pointer make sure to dry them off well so they do not get chilled after hunting. Always check the ears regularly for mites, dirt, or fleas that may become trapped. The Pointer is an average shedder.

Make sure to give this breed all the exercise in the world. This is a very active breed and can be even more active than the regular active family. If they do not get enough exercise then they might become destructive in the house.

About two centuries ago this dog was created. It was created with a mix thats for sure. The pointer was developed by crossing the Italian Pointer, the Foxhound, the Bloodhound, the Greyhound, the Newfoundland, the Setter, and the Bulldog. Even with a mix like this it has created one of the most outstanding hunting dogs around.

The Pointer has been around for almost 80 years. They were named the Pointer because of the way they would have their bodies when they found where prey was hiding. The first time the Pointer was mentioned dates back to 1650. At this time, the Pointer was only used to point out where the prey had fallen and then the Greyhound would retrieve the game. The Pointer became a choice of dog around the early 1700s. They mainly hunted upland birds, but have been known for hunting other game as well. Their sense of the game makes them a wonderful hunting partner.

One modern Kennel Club noticed this breed in 1936. One dog that received the most notability was a dog imported from England in 1876 named Sensation. This dog is now known very well for being on the emblem for the Westminster Kennel Club. So, this breed called the Pointer is very well known with being on the emblem and known for the hunting lives they have lived and still live to this day!