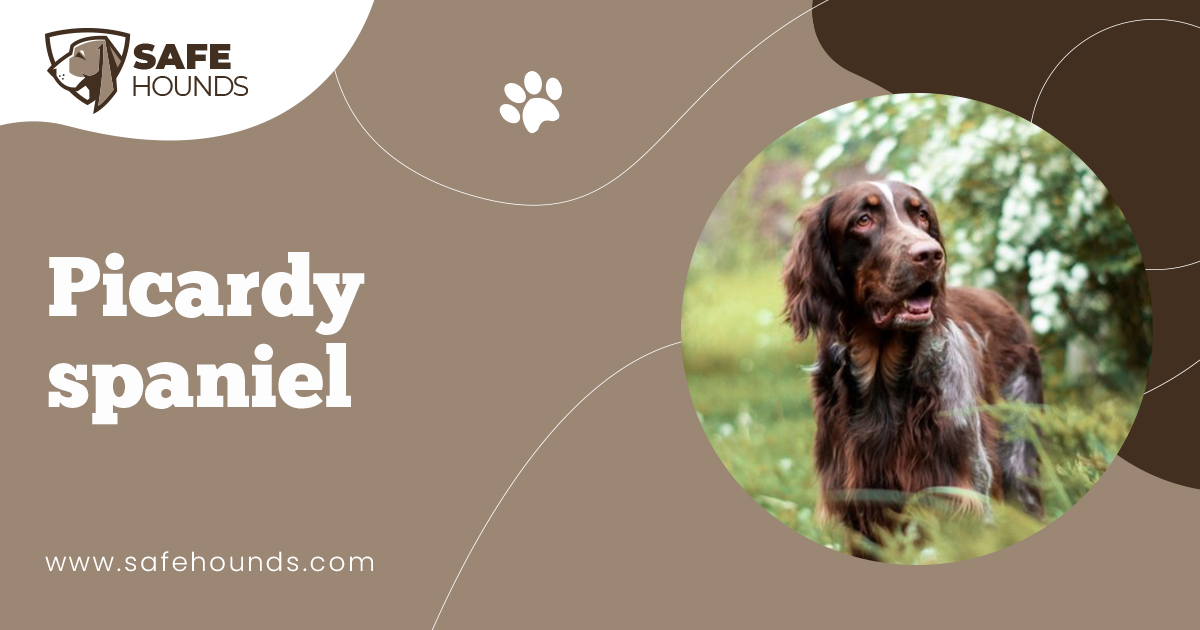 The Picard Spaniel is a courageous and a tenacious dog. A hunter can not ask for a more suitable hunting companion. This dog though is naturally amiable, always in good spirits and forever wanting to please the master. These qualities endear the dog not only to the hunter but also to the rest of the family.

The Picardy Spaniel may have a strong and muscular body but at a glance one can see that the dog is elegant. The physique as well as the coat gives the dog an impressive appearance. Some dog owners would choose a breed for its working ability. Others would opt for one that has an admirable appearance. Owners of Picardy Spaniels are fortunate as the dog both has good working ethics and at the same time has a striking appearance.

The Picardy Spaniel is a square bodied breed. Dense, fine and supple hair that is slightly wavy covers the entire body. Coat colors are usually chocolate, chestnut brown and white. The coat is heavily ticked giving an impression of two toned brown roan. The dog may have sandy colored markings on the head and white or gray spots on the legs. The coat gives the dog protection from difficult weather conditions as well as from brambles in varied terrain.

The Picardy Spaniel really has outstanding looks. The round medium sized nose is well rounded. The well opened dark amber eyes have a frank but friendly and gentle expression. The ears are set quite low but they beautifully frame the head with its covering of silky hair. The tail may not be long but it is well furnished with silky feathering.

A Picardy Spaniel has a most pleasant personality. This breed is appreciated not only because it is a good hunter but also because it is an intelligent and well mannered dog. A Picardy Spaniel makes a wonderful pet. This dog forms a strong attachment to the family. It is a loyal and devoted pet that would eagerly anticipate the commands of the master. This dog would not dip a foot to test the water if asked to fetch a toy or to retrieve a game from deep water. A Picardy Spaniel would always do its best to please the family. The dog would liberally dish out affection but would also need to be stoked and expect to receive praises. Having formed a strong attachment with the master, the dog would want to be where the master is. This breed can live outdoors, in fact they are equipped with a weather resistant coat. However, as this breed would constantly look at the owner for direction they would prefer to live inside the house. Always needing human attention, the breed makes a gentle and lively companion and playmate of the children. This is not an aggressive breed. A Picardy Spaniel tolerates other dogs though some specimens may have the tendency to chase smaller pets.

This breed is not suitable for apartment living. The dog may prefer to live inside the house to be near the human family but it is known to be inactive indoors. A most suitable owner is an active person living in a home with a yard where the dog will have the opportunity to expend it energies. Being working dogs, Picardy Spaniels would need vigorous exercise.

This breed does not need extensive grooming but it does require weekly brushing to maintain the condition of the medium length silky hair. Attention must be given to the ears as being a hunting dog the Picard Spaniel is prone to ear infection.

The Picardy Spaniel belongs to the vast family of spaniels that originated from France centuries ago. Both the French Spaniel and the Picardy Spaniel are considered to be the oldest continental breeds. This is due to the fact the both breeds are speculated to have stemmed form the ancient Chien d Oysel. These dogs were described in the writings of Gaston Phoebus and Henri de Ferriere towards the end of the 14th century. During this era hunting is one of the favorite sports of the nobility. The Picard Spaniel became the favorite of royalty and was seen accompanying kings and princes on hunting expeditions. This was evidenced by the painting done by Desportes and Oudry. The spaniel was portrayed in painting of royal hunts. Moreover, The Picardy Spaniels were the first hunting dogs to be admitted in salons.

This breed became more popular when privilege hunting was abolished as an aftermath of the French Revolution. Middle class citizens and farmers have now taken to hunting. The Picardy Spaniel has spread throughout France although a large concentration of the breed was found in the wooded and swampy areas of northwest France. With the weather resistant coat, the Picardy Spaniel is well able to withstand the wet and the cold weather.

The Picardy Spaniel is a versatile and courageous hunter that does well in the woods, in the plains as well as in the marshes. The breed is also known to be affectionate, obedient and sociable – qualities that makes the Picardy Spaniel an outstanding home companion.