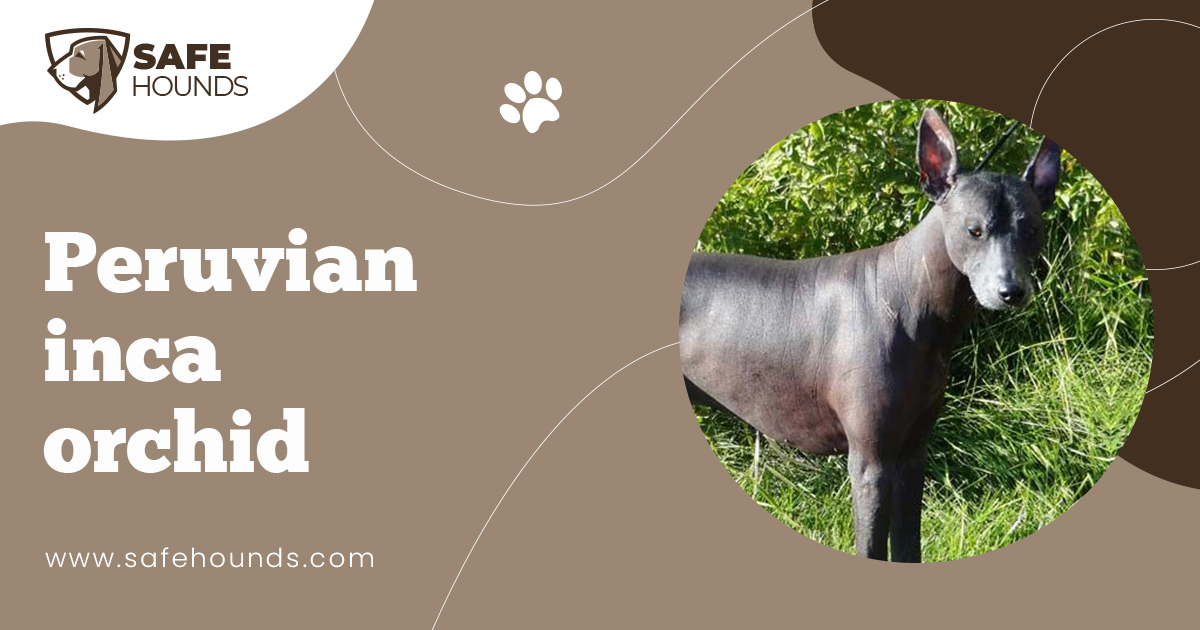 Caa-alkpo in the native Peruvian dialect means the dog without vestment. This is the name given to the Peruvian Inca Orchid for the very reason that the dog is hairless. Peru is the home of these very ancient dogs that existed before the Inca culture. PIO is also known as Perro sin Pelu del Peru (Dog without hair of Peru), Inca Hairless dog and Peruvian hairless dog.

During the Spanish expeditions in Peru, the Spaniards were amazed to discover hairless dogs in the cool darkened rooms, among the orchids that decorated the homes of Incan nobilities. These dogs were primarily developed by the Incas as bed warmers. The PIO like any other hairless dogs are known to have a higher body temperature therefore these dogs are ideally used as hot water bottles. Although devoted family pets, PIOs often became the main dish in an Incan meal because it was believed that the dog has medicinal efficacy that can relieve rheumatism, arthritis and other muscle aches and pains. Incas are known to have a rich culture and traditions. These hairless dogs were sacrificed in religious rites and ceremonies. Loyal pets were also killed and buried with their masters.

The Peruvian Inca Orchid dog resembles a deer both in structure and in gait. These dogs belong to the sighthound family. They hunt by sight. There are actually two types of PIOs – the hairless and the coated (powder puff) varieties. Both dogs can be born in the same litter. Parents that are both coated would produce a coated puppy. Hairless pups as well as coated ones are produced if one or both parents are hairless. The coated or the powder puff variety is quite rare and disqualified from conformation showing. These dogs are mainly used for breeding purposes. Breeders wanted to improve the skin and teeth problems that afflict the hairless variety.

The Incas were known to practice selective breeding. Brother and sister marriages are practiced by this race to ensure purity and consistency of genetic characteristics. This practice is carried over to the breeding of their dogs to produce dogs of pale hues. Lighter skin toned dogs are move valued. These light colored dogs however need to be protected from the rays of the sun not only to prevent blisters and sun burns but more importantly to avoid the possible development of skin cancers. Dark skins furnish protection from the harmful rays of the sun. Dark skinned hairless PIOs are considered daytime dogs as unlike the light skinned ones they can roam the streets even during daytime.

The light skinned hairless variety is very sensitive to light. The dog would continuously squint if exposed to bright lights. PIOs do not like the lights of day, they abhor the rays of the sun. Because of their hairless condition they are sunburned and blister easily. These dogs would stay quiet and passive indoors all days but when night time comes the dogs would party! These dogs would roam the streets of the city under the moonlight thus gaining the name Moonflower dogs.

As aforementioned the PIO comes in the coated and the hairless varieties. The hairless though are more preferred. Peruvian Hairless dogs come in three sizes: the small which stands 10 to 16 inches, the medium which are 16 to 20 inches and the grande or the large that are known to measure from 20 to 26 inches tall. Skin colors would range from elephant gray, copper and chocolate brown. Some dogs are mottled, others have one distinct color and a number of dogs would have pink spots. Eye color would depend on the color of the skin. Hairless PIOs have wrinkled lips. The candle flame shaped erect leathery ears are at times covered with wisps of hair. Some dogs would also grow crew cut hair on top of the head. Skin is pliable and soft. The hairless variety lack premolars and most of these dogs would become toothless in maturity.

Coated PIOs hair is at times the same as a Dobermans in length. Some powder puff PIOs would have longish hair similar to that of a Collies. The most common color is white with variedly colored and shaped patches. This hairy version of the PIO breed has rose ears. Because of the dense hair covering, the ears are not pricked. The coated variety has full dentition.

Both the hairless and the coated Peruvian Inca Orchids are lithe with light boned and well muscled bodies. Both have long tapered tails. Although dental and eye problems are common in this breed PIOs have an approximate life span of 11 years

Peruvian Inca Orchids are very affectionate dogs. These are kissing dogs that would love to snuggle and sleep in the owners bed. Once loyalty is formed it would become a devoted and ideal companion, one that would provide constant amusement to the human family as these dogs are known to fool around and act as clowns. These are very gentle dogs especially to small kids. However, because of the nature of the hairless coat they would not appreciate rough handling.

These are smart quick witted dogs that would respond to obedience training easily. Some dogs though are independent thinkers and would get easily bored with repetitious commands. Mental stimulation is needed to entice the dog to follow commands. These are sensitive dogs too and harsh reprimands would make the dog scoot in a corner to sulk.

These dogs would make ideal watchdogs as they are suspicious and reserve with strangers. These dogs would show aggressiveness in front of strangers, would not let strangers come near them. However, because of their slight build they would make poor guard dogs. PIOs love the company of other dogs and if properly socialized would tolerate other smaller pets.

These dogs would do well in an apartment as this breed would need to live indoors because they are virtually naked and would need to be protected from the elements. The dog can not tolerate harsh weather conditions. In summer, the dog need to be kept cool and during the cold months of winter a sweater would be most needed to keep the dog warm. These dogs do not need rigorous exercise but just like any would need to be exercised daily. A suburban home with a fenced in yard would be a most suitable home for a PIO. If the weather permits, the dog will have ample space to roam even in daytime. If the dog will be kept outside the home a shady and warm place should be provided.

The Peruvian Inca Orchid is a clean dog given that being hairless makes it free from fleas. The dog though is susceptible to acne and black heads. Contrary to the notion that because the dog is hairless it would not need to be cared for, PIOs skin would constantly need to be protected from the sun. A sunscreen should be lathered on the dogs skin if it has to go out in the daytime. This is to avoid sunburn. Some owners of show dogs use exfoliating creams similar to what humans use to keep the skin soft and to remove dead skin. If your dog does not compete in conformation shows creams and lotions would be enough to make the skin supple. Soft skin tends to tear easily and would not be suited for a PIO in a normal environment. The Peruvian Hairless dog has no doggie smell but bathing the dog with gentle soap regularly is recommended.

The coated PIO would not need very elaborate maintenance as the dog does not shed. Coat though must be brushed regularly.

These dogs were originally developed by the Incas as bed warmers. Because the dogs are hairless, they are kept inside the house all day and after sundown all the other coated dogs will be locked in kennels and the hairless dogs will be allowed to roam the streets. Locking the coated dogs will ensure that the hairless PIOs will not be mated with coated dogs. The Incan nobility lived in large homes with rooms festooned with exotic flowers. The Spanish colonizers found these dogs in the cool dim room of the Incas.

Theories about the origin of the Peruvian Inca Orchid abound but it is most likely that the dog originated from the Xoloitzcuintli, the hairless dog from Mexico. These breed was brought by the Ecuadorean sea traders. These dogs were taken by the traders aboard the ship as a source of fresh meat.