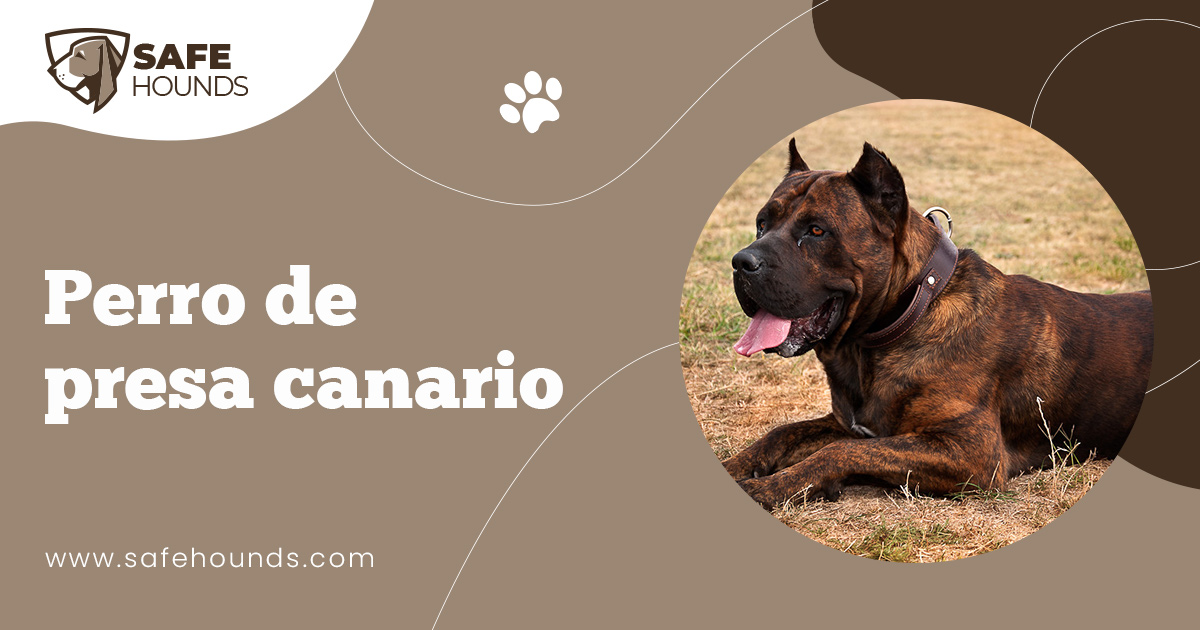 Presa in Spanish means catch, hold or press. Perro de Presa Canario is a dog whose jaw is as powerful as pinchers. This dog has an ingrained willingness to fight by dashing into battle with electrifying speed and catching and holding the ears, throat until the opponent is maimed and killed. This is a Molosser type of dog that originated from the Canary Islands of Spain. Many people may not be aware of the fact that the name of the island was not taken for the little yellow singing birds. The island in fact means island of the dogs, cane being the Latin word for dog.

This breed was developed in the 18th century specifically to guard the farms, to protect and drive the livestock as well as to get rid wild dogs. Because these dogs are courageous, have powerful jaws and exceptional defensive abilities, they are specifically bred for dog fighting. English settlers brought along with them dog fighting as well as their Bulldog and Mastiff breeds. Canary islanders bestow the title perro de la tierra or dog of the land to the Presa as the dog fights were considered as honor fights. Dog fighting was banned in 1940 but the Presa was still used in underground dog fighting activities.

The Presa Canario is a dog with a massive head and a balanced well muscled body. Along with its impressive appearance is the dogs very strong character. Being fighting dogs, they seem to have a large threshold for pain. A Presa may be indifferent to the physical pain that can be caused by a minor medical procedure.

A Presa is not a breed for a first time dog owner. This breed would need a firm hand, must be shown who the alpha male is. The dog must be trained to look up to the master. A well trained and disciplined dog will never try to dominate the master. This is an independent and strong willed breed and once it detects weakness on the character of the person he considers to be the leader, the dog will be manipulative and try to take over. This can be dangerous as losing control over the dog can result to unfortunate circumstances.

Perro de Presa Canario are large mastiff type of dogs. They have a large and massive head that appears to be square shaped a broad muzzle and a black pigmented nose. The fleshy lips forms an inverted V. A Presas medium sized eyes are wide set and oval in shape. Eyelids are tight and dark pigmented. Eye color depends on the coat color but usually range from light to dark chestnut. These eyes are noted for the dogs intense stare. The medium sized set on high ears are well separated. Uncropped ears covered with short hair hangs on the side of the head. Cropped ears are pricked. The ears are usually cropped not only to give the dog a more formidable appearance but also to prevent the ears from being damaged while working with cattle and injured in dog fights.

A Perro de Presa Canario has a rectangular body with a straight backline. The dogs rump is slightly raised creating a saddle effect. The chest is deep, ribcage is arched and the stomach is drawn upwards giving the dog a robust and well proportioned appearance. The tail is high set, thick at the base and tapers to a point. The tail is carried saber-like when the dog is on the move, at rest the tail hangs down with a curl at the tip.

The dog has a thick and elastic skin that is covered by short fur. The medium length rustic hair ranges from light brown to dark grey, all shade of fawn, red and blond. White is commonly found on the muzzle, chest and feet. The dog has a black mask that does not extend beyond the level of the eyes.

The mesomorphic body and the cat foot shaped paws are responsible for the dogs feline movements. Average height of a male Presa is from 23 to 26 inches, weight is from 110 to 125 pounds, females have an average height of 22 to 25 inches and an average weight of 88 to 105 pounds.

The Presa Canario temperament is known as the island temperament – gentle, affectionate and noble with the family but wary and distrustful of strangers. The Presa forms a strong bond with the human family. This dog is affectionate and loyal. They are devoted to the family and known to be very protective of the children. A Presa would seem to be indifferent, quietly observing. This dog is noted for its intense gaze. Any sign of danger to the family will make this dog pounce. This dog however is not recommended for families with babies.

The Presa is tough and aggressive by nature. The massive appearance of the dog compounds its ferocious attributes. This dog would not hesitate to confront any intruder. Intensive training is therefore necessary as an untrained Presa can be a very dangerous dog. Training a Canary Dog can be challenging. Training must be done while the dog is still young. A matured dog can be stubborn and domineering. These are very intelligent dogs and there is no doubt that they will understand the commands. However, the dog may choose not to obey.

A well trained Presa will be a devoted pet, one that will adapt to any kind of environment. A well socialized dog make excellent home companions as it will tolerate other pets. Presa are known to live comfortably with other dogs, cats, horses and other animals. A Canary Dog is pretty versatile. It can live in a house in an urban area or in a farm. The owner however, must ensure that the dog is provided with enough space where it can run. These are working dog and they would naturally need vigorous exercise.These dogs are relatively inactive indoors but it would not be a good idea to constantly keep them indoors for they will be bored and be destructive.

If you own a Perro de Presa Canario grooming your pet will be no trouble at all. The short coat needs to be brushed once or twice a week with a firm bristle brush. Wipe the coat with chamois cloth or towel and you will have a dog with a gleaming hair. Shampooing and bathing are on a necesity basis only. This dog is an average shedder and you wont have to worry that your vacuum cleaner will be clogged with dog hair.

It was believed that Perro de Presa Canario has been in existence as far back as 50 BC. It was historically mentioned that during the reign of King Juba in Mauritania a group of people were sent to Canary Archipelago for territory study. These people were attracted by the huge dog in the island and brought back two huge dogs to King Juba. The description of the dog matched that of the Presa. 16th and 17th century historical data that pertains to the Presa were found. Decrees pertaining to the Presa and to another dog breed (Perro de Ganado Mojero) were issued. The resolution states that only butchers can keep the Presa as these dogs are used in slaughtering cattle. It was stipulated that the dogs should always be kept on leash and would only be let loose to do their task. A decree was issued to kill the other Presa as they are proving to be a menace to cattle and other domesticated animals.

When English colonies were established in the archipelago, the English settlers brought with them not only their bull dogs and pit bulls but also their traditional dog fighting. It was inevitable that the Presa will be mated with the dog gladiators. The new Perro de Presa Canario that was developed now have the adroitness, the physical strength and the fearlessness typical to a fighting dog. This breed almost became extinct in 1960 when dog fighting was banned. The situation was aggravated when other settles introduced the Great Dane, the German Shepherd and other breeds to the island.

Fortunately, in 1970 Dr. Carl Semencic has undertaken the reconstruction of the breed. The Spaniards searched for the remaining dogs. Pure blooded specimens were found and these dogs served as the foundation for the revival of the breed. In a span of ten years the breed was revived and established.

In 1982 the Spanish Club of Perro de Presa Canario was established by a group of cynologists. The breed was introduced to United stated and Canada by Dr. Carl Semencic and later on the breed was included in the Foundation Stock Service List. The breed is now well known in United States. Unfortunately, an ill fated incident caused the breed to have a bad reputation. A Presa attacked and killed a woman in front of her apartment. The dog is vicious but with proper training and socialization they can be turned into devoted, loyal, calm and docile pets.