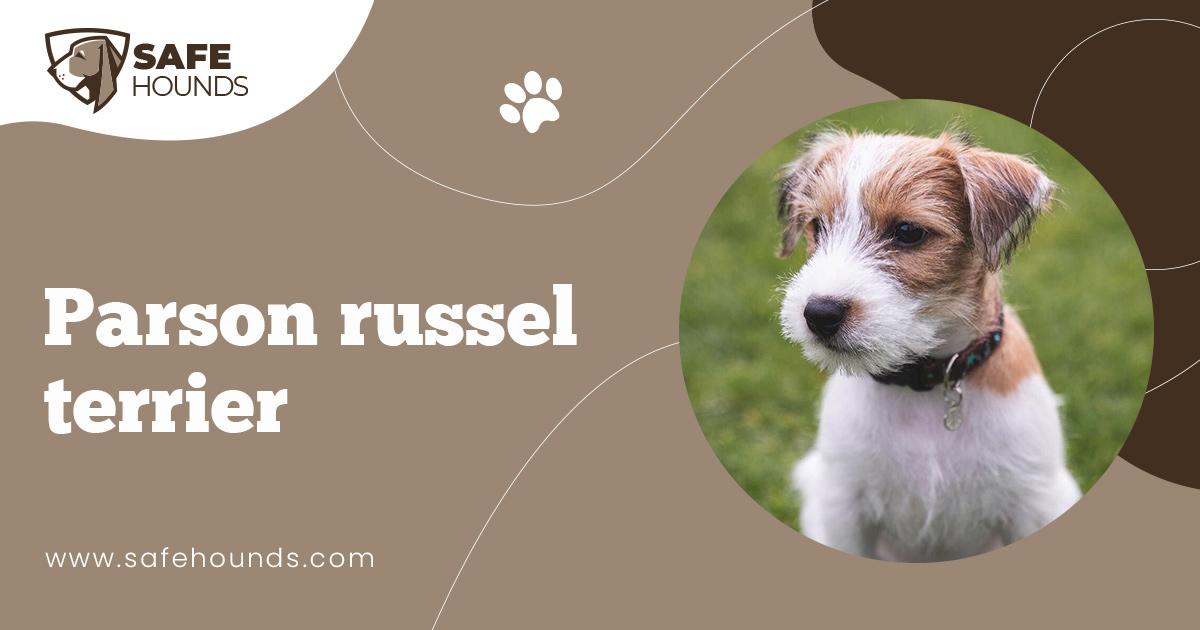 It looks as if it is a less refined Fox Terrier. It has white, usually 50%, or 51%, with tan, brown, or reddish black markings, especially on the head and on the tail. The skull is flat between their ears, then tapering. The V shaped ears fold forward, the nose is black, and the eyes are dark and almond shaped.

It has a very flexible body and a small chest, about the span of an average mans hand. This helps them to go close to the ground after their prey. Their docked tail is merrily carried and set fairly high.

Their coats come in three types, which include smooth, broken, and wire-haired. The broken coat is a cross between the rough and the smooth coat – a slightly fuzzy face, long body hair, and a smooth head.

Unlike the Jack Russell Terrier, it is more of a show breed rather than a working breed. The breed is evolving where as they are hard to define, as in the USA, they will have the white, tan, or black markings. While in Australia, they could be all white or white with lemon markings.

The Parson Russell Terrier is mostly white with little spots of different colors, such as tan, black, or brown. Usually the spots are on the head or the tail. Sometimes you will find them on the back. Often they will not have any spots, or they will have more brown than white.

The normal Parson Russell Terrier is 12 to 14 inches tall and weighs 14 to 18 pounds. The neck is muscular and clean, a fair length, moderately arched, and gradually widening so as to blend well into the shoulders.

The Parsons have a double coat, which is naturally harsh. It is straight with no sign of kink, it is very dense and close. The terriers are natural in appearance and do not need excessive grooming. They have only a hint of eyebrows and beard with a clear outline.

The forequarters are well laid back, cleanly cut, long, and sloping. The shoulder blade and upper arm are about the same length. The legs are placed well under the Parson. The elbows hang equal to the body, which enables free working of the sides. The hindquarters of the Parson Russell Terrier are smoothly molded, strong, and muscular, with bend of stifles and good angulations.

The head is strong and is in good size to the fit the rest of the body, therefore maintaining the balance in appearance. The moderately thick ears make a small V shape, while being carried forward close to the head with the tip of them pink. From nose to stop, the muzzle is slightly shorter than the distance from the stop to occiput.

The Parson Russell Terrier is a spirited, obedient, and loving dog, yet is absolutely fearless. It enjoys games and playing with toys. Friendly and generally kind to children as long as they do not tease or hit the dog. Though merry and devoted, it can be slightly hard to train and needs a firm experienced trainer.

The Parson Russell Terrier can be aggressive to other dogs if not trained well and socialized. Early socialization cap help moderate this trait. They love to explore and chase, be careful letting them off their lease if not trained properly.

Parson Russells love to dig and bark. If not kept occupied or exercised, they can become bored and maybe even destructive. They can climb fences, and also jump. The Parsons stand 12 inches high and can easily jump 5 feet.

This breed is not the breed for an inexperienced dog owner. The owner needs to be as strong-willed as they can be or this little dog will take over. Remember these are big dogs in a little dogs body. With the right owner, these dogs can really do well, but is not recommended for those who have not had experience with other terriers.

They will do alright in an apartment as long as they are exercised regularly. They are very active indoors and will do best with an average sized yard. If the Parson Russell Terrier stays in an apartment, they should have someone with them during the day unless they are crate trained. Even then, when the owner gets home, he or she should be ready to be pestered for belly rubs, tug of war games, and get plenty of exercise.

The Parson Terriers are very adaptable and will run and play in a small yard, However it is most happy with a larger yard with extra space to run, hunt, and play.

White fox-working terriers were bred by the Reverend John Russell. Along with being a parson, he was an avid hunter born in 1795. During his last year at the Oxford University, he bought a small white and tan terrier female named Trump, from the milkman. She was purchased based on the looks of the dog alone. Trump was the basis for a breeding program to make a terrier with high stamina, along with courage and formation to chase out the foxes that had gone underground, while not possessing the aggressiveness that would give the foxs physical harm. If the fox was harmed, the hunt would end and be considered unsporting.

John Russell became well respected for the qualities of his dogs. Many people would often borrow his dogs to take on various hunts. It is very unlikely if any dogs alive today descended from Trump, because John had to sell all of his dogs on more than one account, because of financial problems, He only had four aged, non-breeding, terriers left when he died in 1883. The only painting that remains of Trump is one that was made over 40 years after Trump had died, and it was painted by someone who had never seen the dog. Russell said the painting was of good likeness, but he may have just been trying to be polite, because the painting was commissioned by Edward VII (the Prince of Wales) who was friends with Russell in his old age, and had the painting done as homage to the old man. On the day, that Reverend John Russell died, his sermons, and other papers were found blowing in the farmyard. There is little or no written record of Reverenced John Russell, which has been found today. It is often stated Trump was 14 inches tall and weighed 14 pounds, there is no proof for this statement, and it seems to have been written by someone who had never met Russell and were using the painting of Trump for their guesswork.