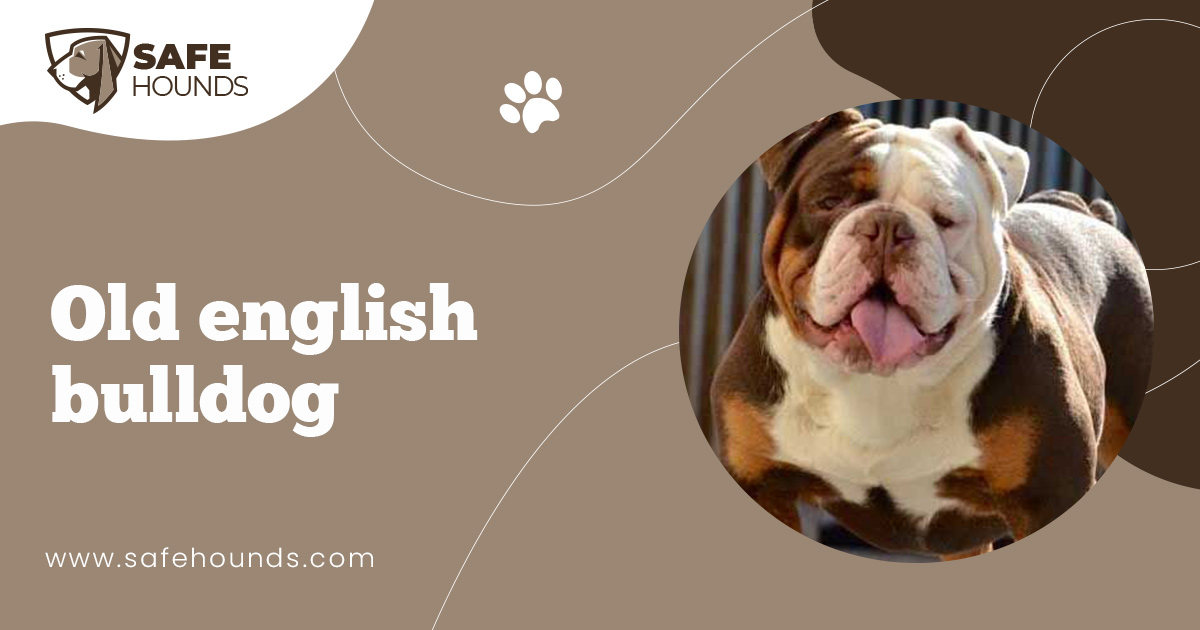 Bull baiting dogs have been around since the 13th century in England. Bull baiting is considered to be a cruel sport but it is widely accepted not only by the commoners where the activity usually involves large amounts of bet money. The blood sport is also a most enjoyed form of entertainment for the nobles and the royalty. Bull baiting dogs have enjoyed a large following. However, after the banning of bull baiting, interest for the bull baiting dogs waned. Some of the once highly valued breeds were lost to oblivion. In the late 1960s to the 1970s, attempts were made by some breeders to recreate the once popular bull baiting breeds. The Old English Bulldog is one of the products of this reconstruction. David Leavitt, considered to be the father of the Old English Bulldog was successful in recreating the famous breed during the Regency period by using the American Bulldog, English Bulldog, Mastiff and APBT as foundation stock.

This Old English Bulldog has the strength and the looks of the original bulldog. However, the Old English Bulldog was not developed for blood sport. Leavitt was successful in out breeding the aggressiveness of the original bulldog from this breed. The Old English Bulldog of today, similar to its ancestor is noted for its strength and agility but the dog possesses a well balanced temperament. More importantly, the new breed does not have the health concerns of its ancestors. Artificial insemination and Caesarian sections are the standard protocols in breeding the original bulldog breeds. Natural ties are standard for this reconstructed healthier breed. These dogs do not have the breathing concerns of their ancestors as well. The OEB was developed to be a working breed. It is now gaining recognition in weight pulling, in therapy work. The breed may have a disreputable ancestry but this breed is noted for having a stable and trustworthy temperament and for its boundless love for its family.

With its muscular well proportioned athletic build, the Old English Bulldog has the impressive looks of a gladiator that is much capable of excellently performing the job of its forebears bull baiting. This appearance that exhibits immense stamina, strength and stability however is not matched with the aggressive and vicious temperament of its ancestors. The Old English Bulldog is actually a breed with a well balanced temperament. The massive head of this breed accounts for its dramatic looks. Did you know that the circumference of the head is equal to the height of the dog measured at the withers? The large narrow skull has a domed forehead. The wide muzzle is almost square shaped. The muzzle is moderately wrinkled and has semi pendulous flews. Medium sized eyes that are either round or almond shaped are set wide apart. This breed has black pigmented eye rims and brown colored eyes. Black nose is large and broad. Small to medium tulip, rose of button ears are set on high at the rear of the skull as far apart as possible.

The medium length neck is broad, heavily muscled and slightly arched. Neck is covered with slightly loose skin that forms double dewlaps. This breed has a powerful and sturdy body. The back is wide and muscular, the muscular loin slightly arched. Wide and deep chest has well muscled brisket. The low set tail tapers from the base to the tip. Tail that reaches the hocks or a bit shorter is usually carried straight with a pump handle tip though it can be carried down or high. An Old English Bulldog has a medium dense short coat that lies close to the body. The shiny coat can be in solid black, fawn, red or white color. Coat can be a brindle of black, fawn, red or gray.

An Old English Bulldog may have a fierce and intimidating appearance but the dog is friendly, docile and has lots of love to give to its family. This dogs love for its people, especially for the children is unsurpassed. The dog is always eager to please its family. It gets along well with other animals too. An OEB puppy would be playful and high spirited but matures into a dignified and calm adult with a slow ambling gait. But make no mistake the dog will move with unexpected speed if any member of the family is threatened. This breed may have the ideal qualities of an outstanding family companion but the dog is certainly not for everyone. This dog is not for people put off by slobbering and snoring. Because the dog has the tendency to swallow air its behind usually emits an obnoxious smell that can be most unpleasant especially in a small unventilated place. The dog is also a pro at chewing. An owner has to provide the dog plenty of chew toys to prevent the pet from being destructive. An Old English Bulldog is a highly adaptable breed. The dog would do well in a home in the country or in an apartment in the city. This breed had moderate exercise requirements. Light exercises during the cooler part of the day would keep the dog in shape.

This dog is short coated. It is also an average shedder thus its grooming requirement would be minimal. Occasional brushing would be enough to maintain the good condition of the coat. An Old English Bulldog though slobbers. The flews and the folds on the face of the dog must be regularly cleaned. The dog is a voracious eater. OEBs are susceptible to bloat. The dog must not be allowed to consume large quantities of food in one meal.

Bull baiting goes back to the ancient Roman, Greek and Egyptian era. This blood sport is a favorite form of entertainment of nobles and royalty although a bull baiting event is attended by the common people as well where wagers usually change hands. The bull baiting sport was introduced in England in 1209 by William, the Earl of Warren. During this period, the English people believed that baiting a bull before the animal is slaughtered would make the meat tastier, more tender and nutritious. Dogs commonly called bulldogs were trained to attack a bull by holding on to the animals nose with the vice-like grip of its teeth and jaws. The bull tied with a rope embedded to the ground will have limited mobility. Nevertheless, the bull will try to impale the dog with its horns. Only very agile, dexterous and strong dogs will be able to pin down and defeat the massive animal. At the instigation of the Earl of Warren, bull baiting was made into an annual sporting event. This has resulted to the development of bull baiting breeds of dogs. The Pitbull dogs, the Oldie Bulldog, the Olde Tyme Bulldog, and the Old English Bulldog to name a few were acclaimed for their strength and tenacity to get the bull. Bull baiting became Englands national sport and has remained popular for about five centuries. This blood sport was declared illegal through the passing of the Cruelty to Animals Act of 1835. Most of these bull baiting dogs have gone extinct. Breeds of bulldogs that have survived were selectively bred and crossed with other breeds to temper the ferocity and to make the dogs more manageable. The appearance of the newly developed breeds was altered and health concerns were eliminated as well. The Old English Bulldogs are noted for their breathing and other health concerns. The new or modern Old English Bulldog is one of the breeds developed from the bull baiting dogs.

The Old English Bulldog is a recreation of the bull baiters that were cheered by bull baiting enthusiasts during the 17th and the 18th centuries. Breeding of the Old English Bulldog was started in 1971 by David Leavitt of Coatesville, Pennsylvania. David Leavitts breeding program has the objective of creating a breed that would have the looks of the 18th century bull baiting dogs but one that will not have the health concerns these original bulldogs are prone to. Further, the breeding program is geared towards out breeding the vicious and aggressive temperament common to the original bulldogs. After careful and selective breeding, the Old English Bulldog was developed. The formula for the development of the OEB is ½ Bulldog, ? American Pitbull Terrier, ? Bullmastiff and ? American Bulldog. The recreated breed has a massive head and a thick well muscled athletic body. The OEB has the appearance of the bull baiting dogs of yore without the aggressive temperament. These dogs are healthier. OEB does not have the breathing problems of its bulldog ancestors. Artificial inseminations and Caesarean sections will not be necessary for these breed as these dogs are noted to be better breeders and easy whelpers.