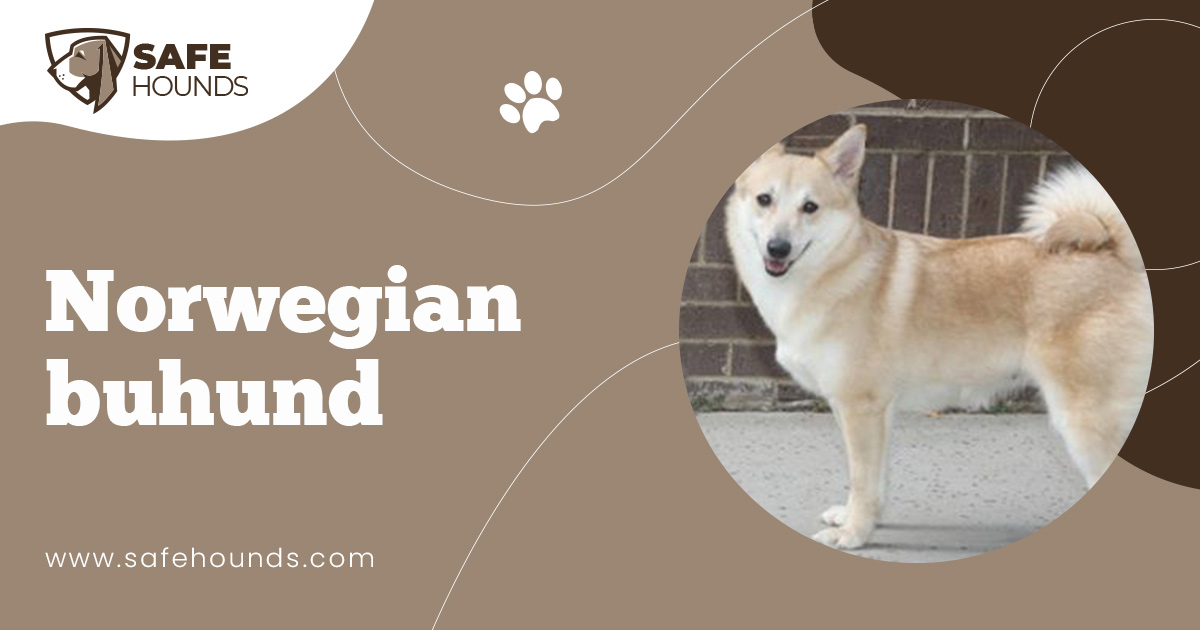 Norwegian Buhund is a very ancient breed with records of existence that dates as far back as 870. This breed has been the constant and trusted companions of Vikings. These dogs were taken to different settlement in Iceland and in Britain. It is believed that this breed is the foundation stock of many present day herding breeds.

A Norwegian Buhund is a medium sized spitz type of dog that originated in Norway. In its native land, the breed also goes by the name Norsk Buhund and Norwegian Sheepdog. Although medium sized, it is a compact dog and its light build make it agile. In Norwegian bu means livestock, homestead or the mountain hut that is used by the shepherds in summer pastures and hund means dog. In Norway the dog is still used in herding sheep, cattle, reindeer and even pigs. The dog is also used as farm dogs that perform varied tasks that include hunting bears, wolf and other large prey. The Norwegian Buhund however is very versatile. Apart from scoring well in agility and obedience trials, the dog can be seen guiding and aiding handicapped people, guarding homes and family as well as performing police work. These robust and healthy dogs are noted for their tenacity and endurance. Their excellent and keen sense of smell, hearing and sight make them excel in search and rescue operations as well as in narcotics detection.

This breed love to work. Herding is in their nature. A Norwegian Buhund owner should make sure that the pet would not chase other peoples pets. This breed has worked with Vikings and ancient farmers for centuries and it would be a crime to curtail the natural working ability of the dog by keeping it kenneled or leashed alone in a yard. Buhunds that does not have the opportunity to do stock work would enjoy helping out with the chores. Mental stimulation can be provided by letting the dog join in family activities. The dog would certainly enjoy a game of fetch or Frisbee with the kids. These dogs can be reasonably happy in an urban or a rural setting as long as they are provided with the companionship and attention of the human family.

These are hardy dogs. Most would need to be in a vets clinic only for the annual booster shots. Norwegian Buhund is a healthy breed and has a life expectancy of 12 to 15 years although many Buhunds have lived much longer.

A Norwegian Buhund is an ideal size for a family pet – a little under medium size. These are lightly built but compact dogs. This breed has an almost square proportion as the height measured from the ground to the withers is equal to the length of the body measured from the prosternum to the rear of the upper thigh. A Buhund has deep chest and well sprung ribs. The lean medium length neck is slightly arched. The set on high tail is thick, even made thicker by the long hair on the underside. The tail forms a tight curl and always carried over the dogs back. The average height of a male dog is 17 to 18 inches and 16 to 17.5 inches for females. Average weight for females is 26.5 to 35 pounds and 31 to 40 pounds for males.

The dogs head is wedge shaped and proportionate to the body. The short muzzle tapers to a black nose. The dog has tight lips, full dentition that meet in a scissor bite. Oval shaped dark brown eyes are not protruding. Eye shape and the black eye rims give the eyes a lively and alert expression. Set on high pointed ears are erect and very mobile though the ears would go back when the dog is showing affection.

A Norwegian Buhund has two coats – a soft wooly thick undercoat and an outer coat that is smooth but harsh or rough to the touch. Commonly the coat is wheaten or ranging from pale shades of cream to yellowish red or orange although there are also black or wolf sable Buhunds. The head and the front of legs are covered with shorter hair while the coat on the back of thighs, chest and neck is longer. The rather small feet of the Buhund is oval shaped and webbed.

From being a herding and hunting dog, the Norwegian Buhund has evolved into an excellent and loyal house pet that would untiringly shower the master with affectionate kisses. These dogs are fun loving and would play vigorously. A lot of outdoor games and exercises should therefore be provided. Because the dog loves to play a lot they are good with children in fact they are very gentle especially with the little ones. This breed gets along well with other dog and with other smaller pets especially when properly socialized.

The dog is a barker, they communicate by barking. These are very alert dogs and would never fail to warn you of approaching strangers. Despite the small size having a Norwegian Buhund on your doorstep is like having a security guard on duty 24/7. Buhunds are friendly by nature, the breed is not aggressive but the dog is fearless and protective. They will never fail to protect the master and his family if needed.

The Norwegian Buhund is an ideal house pet that would respond to training easily. However, this breed may not be the right one for you. A puppy is rowdy and exuberant. This breed is highly intelligent and has a high learning rate. But then again the dog is strong willed and they have a mind of their own. Oftentimes the dog is manipulative. A Buhund will look at a weak owner as his equal never his master, and would please himself rather that bend to the will of the master. The master would need to be firm and consistent in order to curb the stubbornness of the dog.

More than other breeds a Noerwegian Buhund would demand lots of attention and companionship from the master. A Buhund is known to suffer from separation anxiety. These dogs would not appreciate being left alone even for a few hours as the dog would manifest its boredom through barking and destructive chewing.

A Buhund can easily adapt to urban or city living. Because they are relatively small they would do well in an apartment provided they are given chances to exercise outdoors. This is a versatile breed. They actually prefer cooler climates but can adapt to warmer temperatures.

The Buhund has a sleek outer coat that naturally sheds collected dirt and mud. As the dog cleans himself like a cat, very little human care is needed. Very little grooming is required. A once a week brushing will keep the coat neat and clean as well as remove dead hair.

A Norwegian Buhund is a heavy shedder. During molting time, you would need to brush the coat daily if you do not want dog hair to decorate your furniture, to garnish your food and to clog your vacuum cleaner. Bathing the dog with warm water and regular brushing will accelerate the shedding process. Nail clipping and ear cleaning must be regularly done.

Norwegian Buhunds like other Nordic herding types are believed to have accompanied Vikings in their colonization journeys. In one ancient excavation in Norway, a Viking grave that dates back about year 900 was excavated and skeletons of six dogs were found. These skeletons are believed to be the representatives of present day Buhunsds. It is the custom of Vikings to be buried with their most valued possessions. The dogs that helped the Vikings care for their animals and protect their homes are expected to perform the same services and duties in the afterlife.

The 900 AD to 1300 AD Icelandic Sagas documented how the Norwegian people brought the breed to Iceland. These dogs were primarily used to herd sheep. Later on they become all purpose farm dogs as they are now given the task of herding reindeer, sled pulling as well as hunting. These dogs are the invaluable helpers of shepherds who move the herds from one pasture to another in the Scandinavian mountains. Many of these dogs worked in the homestead thus gaining the name buhund from the word bu which means homestead hund which means dog.

The impressive and more refined appearance of present day Norwegian Buhund was developed in Norways western coastland. During the 1920s, John Saeland, a state counsel of Norway initiated the first Buhund show that was held in Jaeren. In 1939 the Norsk Buhundklubb was organized. In 1940 the breed was first imported to Britain and in the late 1980s in America.

During the ancient times, the Norwegian Buhund is utilized in hunting bear and wolf, now the breed is given other task to perform. The Buhund is now seen aiding handicapped people, scoring well in agility and obedience trials, being utilized by the police force as in search and rescue operations as well as in narcotics detection. And most of all the breed has developed into a well loved family companion.